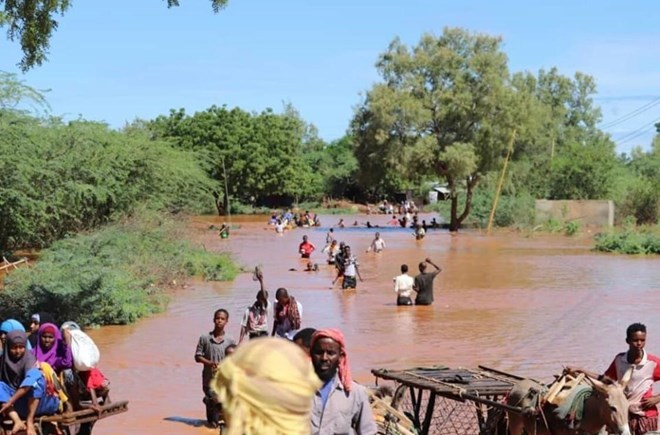 Ongoing flash floods in the agricultural town of Bardhere in Gedo region have displaced hundreds of families and destroyed farmlands but the Federal Government is yet to provide any meaningful support.

Officials in the town told HOL the floods which started on Tuesday after Jubba River broke its banks have since destroyed 500 homes leading to displacement of families and heralding another round of humanitarian crisis.

Over 2000 farms have also been destroyed by the floods in and around the town. But the lack of response from Mogadishu has left local leaders reading a political motive.

“Though I am saddened by what happened to the residents of Qardho,” Gedo Deputy Governor Sheikh Mohamed Al-qadi said, “I do not know the political motive of allocating $1 million to Qardho when the government has not even talked about the situation in Bardhere.”

Al-qadi wondered why the Federal Government has not ‘even expressed concern over the losses suffered by the people in Bardhere’.

The Federal Government announced Thursday a $1 million aid package to support the affected communities in Qardho following flooding there that killed at least six people.

Humanitarian Affairs Minister Hamze Sa’id Hamze made reference to the situation in Bardhere Thursday but did not indicate any government action to help the affected residents.

“The suitable step is to evacuate those people in the affected areas and move them to safe places,” the Minister said. “It is important we come up with plans to support farmers whose crops and farm machinery were washed away by floods in order to prevent further humanitarian crisis,” the minister added.

Support from the Federal Government to regional governments has more often than not been pegged on political patronage and other vested interests.

During the flooding in Beletweyne last October which displaced over 300,000, Somalis from all walks of lives sent in donations either in aid supplies or money.

Puntland sent trucks to Beletweyne carrying supplies as Somaliland dispatched a team with money to aid the relief efforts and even the government of Djibouti sent its support.

However, a source privy to relief efforts intimated to HOL, “The Federal Government is yet to honour its pledge of $500,000 to Beletweyne.”

Former President Sheikh Sharif Ahmed and former minister Abdirahman Abdishakur have both questioned the government’s failure to respond to the Bardhere humanitarian situation.