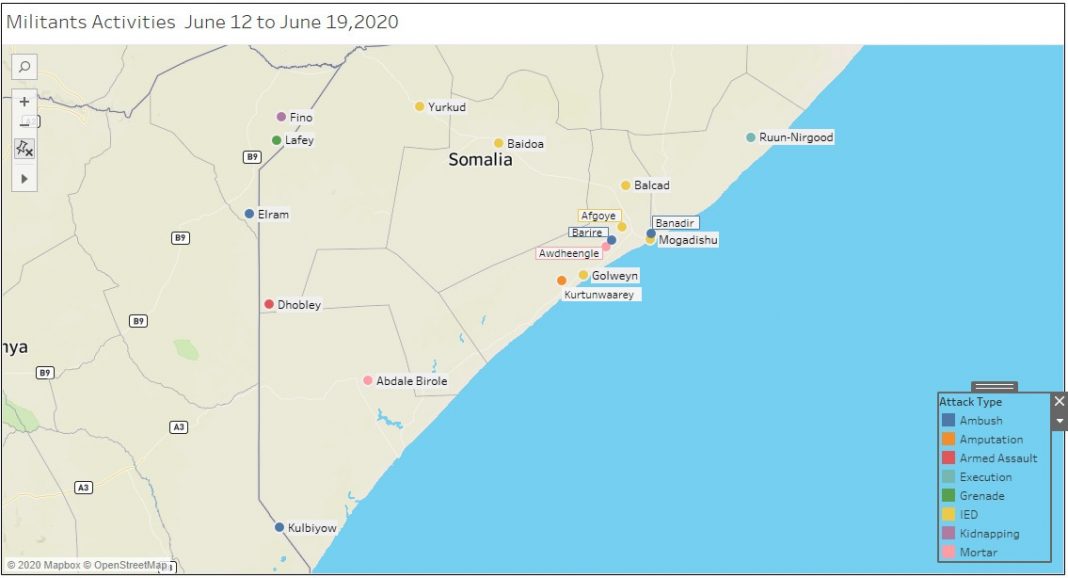 Harakat al-Shabaab al-Mujahideen (HSM), commonly known as Al-Shabaab an affiliate of Al-Qaeda operating in East Africa region continue to record increased successful attacks from across regions of Somalia and its neighbor Kenya.

The militant group has entrenched itself in central and southern Somalia with an insurgency that has targeted Somali security forces, foreign troops and Somali citizenry. The group’s increased activity continues to pose threat and significant burden on the countries of the Horn of Africa and more so to regional forces combating them.

This week, Al-Shabaab has upscaled its attacks in Somalia recording more than twenty attacks and recording at least three attacks in the neighboring country (Kenya). Its more of repeat attacks in Somalia. The Islamist Al-Shabaab continue to target SNA and AMISOM troops in their bases and convoys especially in the rural areas and small towns in the southern and central parts of the country.

In East Africa, Kenya has become a direct target of Al-Shabaab. After a lull in group’s activity along the border with Somalia, Al-Shabaab recorded at least three attacks Kenyan county of Mandera bordering Somalia.  Al-Shabaab continue to target military posts, police, police reservists, and telecommunications infrastructure in northeastern Kenya prefectures, a longtime area of recruitment for the militant group.

Al-Shabaab has surged attacks targeting foreign forces in the Horn of Africa. Despite regional and international efforts to counter Al-Shabaab in recent years, there are some challenges that prevent the elimination of the group or curbing its activity and strike capabilities. Concerted COIN efforts have significantly stemmed group’s activity in the region; however, the group remains active especially in Somalia’s theater controlling almost a fifth of Somali territory.

Apart the previous trends where the group concentrated attacks in the capital Mogadishu and its environs, the group has boosted its presence in regions where geography and economic activities favors its operations and hence persistently fighting to maintain control. Al-Shabaab main operational areas remains in Lower Shabelle, Lower and Middle Juba, Gedo, Bay and Bakool regions, Middle Shabelle, Mogadishu and Banadir districts.

Notable are repeat attacks targeting AMISOM troops especially in Gedo, Bay and Bakool regions. Ethiopian troops under the mandate of AMISOM have become key targets of the Islamist militants. Their bases and convoys seem to be on the enemy’s radar. This week ENDF troops have been targeted with more than 7 explosions, dealing a huge blow to the peacekeepers.

Also, its notable of increased military activity and presence in Lower Shabelle and Middle Shabelle regions of Somalia. Nearly half of the attacks, this week have happened in these two regions. Preferred attack type remains the use of IEDs, Landmines and Roadside bombs. Out of 21 attacks, the militants preferred to use IEDs, landmines and roadside bombs on their targets.

There is a possibility that Al-Shabaab could expand its attacks and terrorist operations in Somalia and escalate terrorist attacks against AMISOM troops with the aim of accelerating their withdrawal from Somalia and filling the void this will increase its area of control.

Al-Shabaab remains the primary direct threat to peace and security in Somalia in particular and the Horn of Africa region in general. The uptick in the group’s activity reveals that the region has become a soft flank for terrorist activity in Africa. Though most of the group’s attacks are low-scale raids, they are significant to the group’s survival and relevance.

The group has perfected its propaganda arm.  The group though its pro-media announces claims of attacks by the militants. The group also releases videos of their past campaigns. Earlier in the week, the group released eighth instalment “And Be Harsh Against Them” propaganda series.

These claims and videos are aimed at glorifying the activities by Al-Shabaab. They are also significant as they shed light upon Al-Shabaab’s growing military capabilities and its ability to execute a terror attack on guarded military defense bases as well as successfully executing mass-casualty attacks in the heart of Somali cities, including the federal capital, Mogadishu.

The newly released video is also a manifestation of the fact that Al-Shabaab runs coordinated media operations that is capable of regularly producing propaganda material and disseminate the ideology of the militant groups. The inclusion of previously unreleased archival footage also shows that the Al-Kataib Media Foundation continues to maintain a sizeable number of recorded groups events and other media materials for later use in Al-Shabaab’s propaganda releases.

Through its attacks inside Kenya, the group seeks to invite broader media coverage given the fact that Kenya is a major hub for diplomacy, tourism and business in Africa. In addition, Kenya hosts a number of international organizations, and is therefore a major target for the group to hit interests linked to Western countries in the region.

Apart from attacking security forces and critical infrastructures in NEP Kenya, the group has severally targeted civilians, especially non-locals working in those areas. Education and health sectors have significantly been affected by Al-Shabaab raids. Attacks on education and health are very tactical moves. In the event children and youth from these regions lacks education, it is will become easier for the Islamist group to recruit them. Al-Shabaab have also in a number of occasions raided and looted chemists and other businesses, thus hurting the economy of Kenya frontier counties.