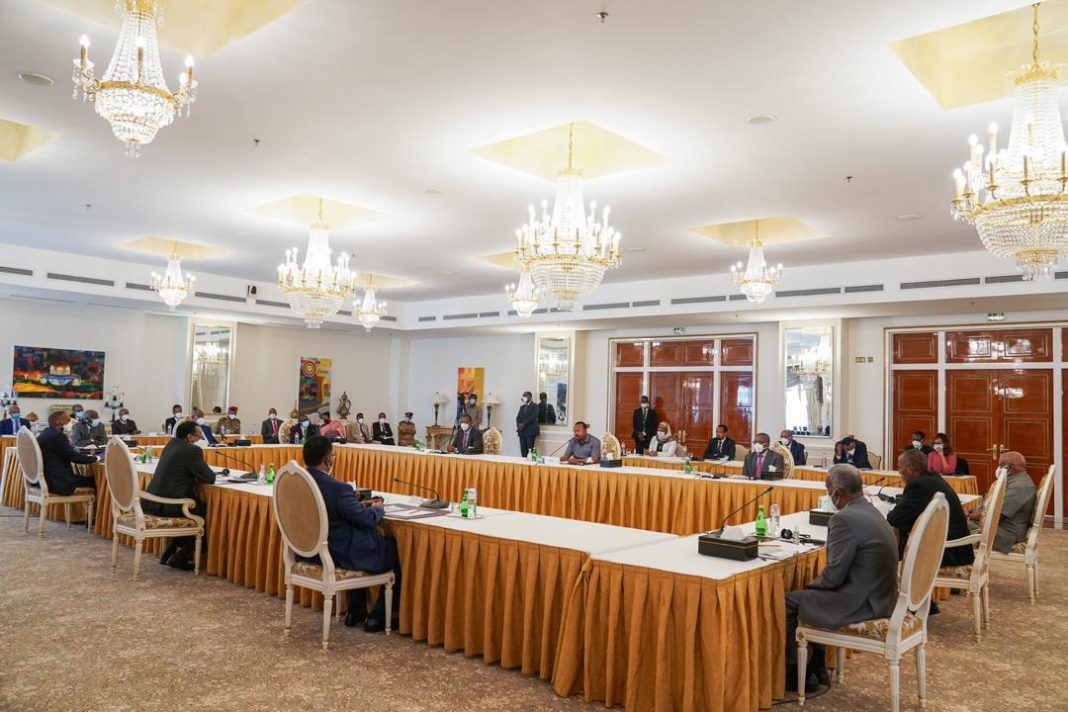 Five days after the conclusion of a summit consultation meeting between the Presidents of the Republic of Somaliland and Federal Somalia, followed by a meeting between technical, ministerial-level committees representing the two sides from 14 to 17 June, a communiqué penned by the Djibouti Foreign Ministry which summed up major common points reached came out Monday.

The Presidency of Somaliland, also,  posted a version of the communiqué on its official page later in the evening of the same day.

The statement covered four major areas on which the committees, reportedly, had reached a preliminary agreement on, as below:

Following the publication of the Communiqué, the larger of the two national opposition parties, Waddani, quickly put a question mark on both content and timing of the statement.

Khadar Hussein Abdi (Khadar Looge), General-Secretary of the party, called on the government to openly share the gist and content of what he called the ‘real agreement’ President Bihi’s government reached with federal Somalia in Djibouti.

“It doesn’t make sense that a communiqué of talks which ended five days ago comes out this belatedly. There, certainly, is more to what we are told than meets the eye,” he said, speaking to the media.

Khadar Looge wondered if the delay to the publication of the communiqué was intentionally timed so not to cloud the massive reception given ‘to a President waving from an open-top car who projected a non-existent victory with unbecoming bravado’ when ‘he should have shown more feeling to the health, education, trying living costs and, in general, the difficult times’ which constituents were going through at this particular juncture of time.

“The Communiqué says it is our airspace which a bigger entity called ‘Somalia’ is going to ‘co-manage’ with the owner – Somaliland. A Communique that has been read and reread by four government does not come out with such an awful glaring mistake. I believe the words are as has been agreed and not a ‘typing error’ as the government wants us to believe,” he said.

The Secretary-General, on the point of allowing a formal integration of the two peoples as is embodied in the second major point of agreement, stated that it was nothing but a step which took the two nations nearer to an ‘unpronounced Federal agreement’.

“The first step which any two countries intending to unite take is to ease travel and social integration restrictions between the two societies. Since we and Somalia are two different countries, there was no call for such an agreement – an agreement the likes of which we do not have with other neighbours, other countries in the region,” he pointed out.

Thw integration point directly violates a 11 October 2003 parliamentary bill which ruled out all sorts of formal integration: social, political, and security in fear of all the inherent dangers it entailed.

The Secretary-General lamented what he called the false hope which the government has made a habit of giving an unsuspecting public every time their future is raised at an international venue. He said that was nothing but a lull to assuage suspicions and never a true interpretation of what the real agenda, the true agreement behind the curtains were.

His Excellency the Minister of Foreign Affairs of the Republic of Somaliland, Yassin Mohamoud Hiir ‘Faratoon’, to the contrary, saw a lot of hope in the two sides of Somaliland and Somalia eventually reaching a lasting agreement.

“The three major areas discussed and on which we shared common perspectives at the end were the non-politicization of development aid and investment projects, the co-management of the common airspace and confidence-building in order to ensure that progress of the talks were not derailed,” he said.

Minister Hiir admitted that there were typographical errors which came out in the final release which ‘will be corrected in due time’.

Speaking of easing integration, apolitical measures between the two peoples, he said was nothing but a mere formalization of trade, cultural and social relations that had been traditionally shared by peoples of the two countries.

“Somaliland was against politically-motivated integration and travel from the Somalia side to Somaliland. We cannot allow that. But neither the Somaliland government nor its public is averse to social, commercial, cultural and sports exchanges which are already practised at different levels and at all times,” he said.

Neither the minister nor anybody else explained how the government would limit the orientation, pro-union schemes which would certainly be packaged in other forms and exported to Somaliland as Villa Somalia had been doing over the years and, specifically, since Farmajo and Kheyrre took the reins in early 2017.

It is noteworthy that the Communiqué was released by the Djibouti Foreign Ministry and not a document signed by either party – Djibouti document, in effect.

Coincidentally, the communiqué comes out a day before the Somalia parliament voted on an electoral proviso which sweeps Somaliland into the murky, untried, undemocratic elections system of a federal system the Republic of Somaliland has nothing to do with – and never had. The act showed – if nothing else – the continued aggression of Villa Somalia against the existence and true course of the Republic of Somaliland and its popular resolution to restore its 1960 independence.

Djibouti hosted a resumption of the talks between the erstwhile members of a failed merger in 1960.

Somaliland and Somalia intended – at the time – to light a beacon for three other Somali-speaking territories (Djibouti, NFD and Ogadenia/Reserve Area) to join them when each – hopefully – also gained its independence to form a Greater Somali Republic.

Ironically, neither the Djibouti leader, Guelleh, nor Abiy Ahmed of Ethiopia chose to touch this sore point which was central to the contentious point of the two sides’ unification 60 years ago,

The Republic of Somaliland had struck out on its own in 1991 after the collapse of the Somalia military regime which left it 50 000 lives and untold of wealth in an over a decade long emancipation war in addition to major cities left in rubble.

A reborn Somaliland Republic which was proclaimed at an all-clan grand conference in Burao on May 18, 1991, never looked back building a modern state which sharply contrasted the anarchy, lawlessness and absence of credible governance in Somalia – a Somalia whose security is still manned and bankrolled by the AU, the US, the UN, Turkey, Qatar and other international partners.