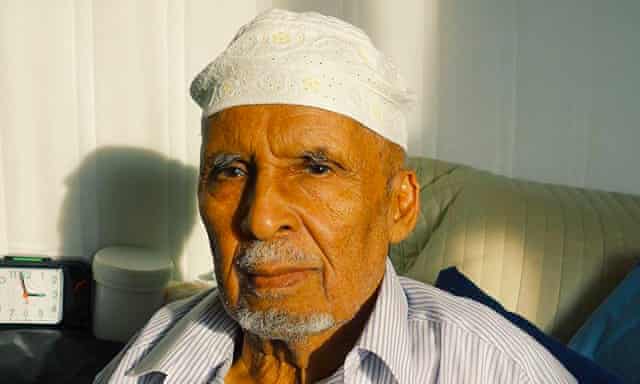 My grandfather Omar Musa, who has died aged 95, was a Somali seaman who came to Britain in the late 1950s and was fondly recognised as a father figure in London’s Somali community. For decades he helped Somali immigrants to settle into the UK, skilfully navigating British bureaucracy on their behalf.

Omar was born in Hargeisa, in what was then the British Somaliland Protectorate, to Musa Abdillahi, a nomadic herdsman, and his wife, Fatima Osman. At the age of six he got his first job, fanning a bank manager in an office with an oversized palm leaf. In 1941, at the age of 16, he left his homeland to seek better opportunities, and he spent the next few years making his way down the coastline of east Africa. He worked the land, earned a wage tending to animals, and generally slept beneath the stars.

Eventually his journeying took him to South Africa, where he decided to join the British merchant navy, working in the engine room of ships and helping to unload and load cargo, something that many Somali men had done since the opening of the Suez canal in the second half of the 19th century. Subsequently he travelled every corner of the world, from Asia to the Americas, visiting 90 countries.

Omar Musa with his wife, Zahra, and young family in the 1960s

In 1954 he returned to Hargeisa to marry a local woman, Zahra Jama, and shortly after the birth of their first child they made the unconventional and courageous decision to emigrate to London. They boarded the SS Orsova in Aden, arriving in England in 1959 and settling in east London.

Omar got a job as a technician with the Ministry of Defence, and continued in that job for the next 25 years until his retirement. Throughout that period he and his growing family became a fixture of the Somali community in the capital.

He always encouraged his seven children to strive for educational excellence, and this enabled them to bridge the gap with other students from more privileged backgrounds. All of them went on to university and had successful careers.

A loving husband and father, he had a great sense of humour, and to his community he was always regarded as a well-respected, well-dressed gentleman, someone with a quiet dignity who was not given to using more words than were needed.

He is survived by Zahra, his children, and 16 grandchildren.