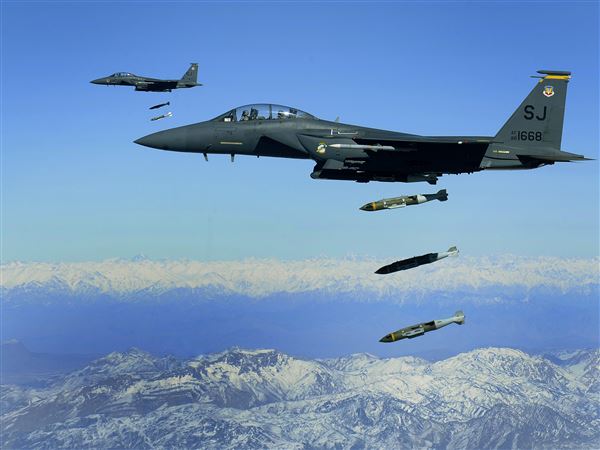 ..report Mr Guterres shared with the Security Council pointed out that Al Shabaab carried out 1591 military and terrorist operations in the past 3 years in Somalia, 438 of which fell within 2020 leading up to mid-August

In the below-copied Press Statement which the US Africa Command (AFRICOM) released on August 2020, the Command insists that the airstrikes which its drones had been carrying out in Somalia is nothing more than a training for Somali forces to engage Al Shabaab.

How missile hits from drones that the Somali forces neither own nor operate is training for the Somali ground forces is a bit baffling.

The statement claims that the U.S. Africa Command continued ‘to train Somali forces and support operations with precision airstrikes.’ That the Command continued training Somali commandos is a valid statement but airstrikes that are often blind and result in civilian casualties to be part of that training is neither here nor there. The airstrikes and the intended support they lend to the ground forces at best implies that the missiles eliminate leaders and none more take their places paving the way for SNA forces to waltz in and take over vast areas from Shabaab command.

To this end, AFRICOM has carried out 46 airstrikes on ground targets in Somalia in 2020 alone – and nothing much had either the SNA or AFRICOM achieved by way of ground victories and takeovers.

What this statement and other statements never fail to underplay, however, is how much more damage the strikes inflict other than the one or two ‘leaders’ neutralized. How much irreparable damage in lives and property are shoved under the carpet as ‘unavoidable collateral damage’.

The strikes also sabotaged on countless instances by the very forces they intended to support, only manage to spawn more resistance, more determination on the part of the militants and their support base on the ground. The more civilian casualties, the more inured to promises of quick salvation people become more often than not leading the young to join Shabaab ranks.

Consequently, the Al-Qaeda affiliated militants picked up daring operations inside the federal capital, Mogadishu, itself baring how impotent, indeed, that Somalia tactics to stamp out the Islamist fighters were.

Mr Antonio Guterres, the Secretary-General of the United Nations, showed concern on the security status of Somalia at a time the UN and the world expected that it take the lead of its own security in 2021.

The report Mr Guterres shared with the Security Council pointed out that Al Shabaab carried out 1591 military and terrorist operations in the past 3 years in Somalia, 438 of which fell within 2020 leading up to mid-August. The last among the latter was daylight raid on Mogadishu’s Elite Hotel.

In fact, the recent, costly raid on Elite Hotel was nothing more than one business enterprise among tens of thousands in Mogadishu that had to suffer if they evaded paying taxes to the fighters. It was a message to evaders as it was a thumbs-up approval to all the others that were paying the Islamists on the sly but, also, well known to the weak government playacting governance at Villa Somalia.

A recent statement which the US Acting ambassador at the UN, Cherith Chalet, at the Security Council after a report SRSG Swan made to the Council, included that the US alone spent US$5.3 billion on Somalia – mainly in security – for the past 20 years or so. The ambassador stopped short of admitting that this huge sum of money and the results on the ground did not match at all. The US was still using airstrikes hoping to hit key Shabaab figures when Somalia – on the ground – appeared to be in no hurry to bring the Shabaab threat to a conclusive end. It was, critics often claimed, perhaps terrified by international aid flow meandering to a few ‘development’ and ‘democracy support’ projects as was presently the case with Somaliland, next door, whose strength comes more from the public than billions from the IC.

The world, and especially the UN and the US, must reshuffle their cards as regards their clearly flawed strategies for a stronger Somalia. Perhaps, they should first do a little research on history and cultures pertaining to moral obligations before going back to the drawing board.

Al-Shabaab Terrorist Network: The Nature of this Enemy

Al-Shabaab is a dangerous enemy that presents a threat to Somalia, its neighbors, and the United States. This Al-Qaeda aligned terrorist organization increasingly employs lies, engages in criminal acts, and blends into communities to create fear and intimidate local populations. They have engaged in a series of violent acts with no regard for the Laws of Armed Conflict, to include previously attacking a hospital and deliberately seeking to place civilians in harm’s way using protected structures, such as mosques, for military and offensive fighting purposes.

Al-Shabaab routinely attacks Somali citizens, military forces, and partners. Somali forces, the U.S., and international partners work toward preserving life while increasing security, stability, and ultimately, the long-term possibility of increased prosperity. Al-Shabaab relies on misinformation and lies, and the group continues to put out false information to include this week’s erroneous claim about the death of U.S. forces in an attack.

U.S. Africa Command will continue to expose the nature of this enemy and who and what they represent—an empty future.