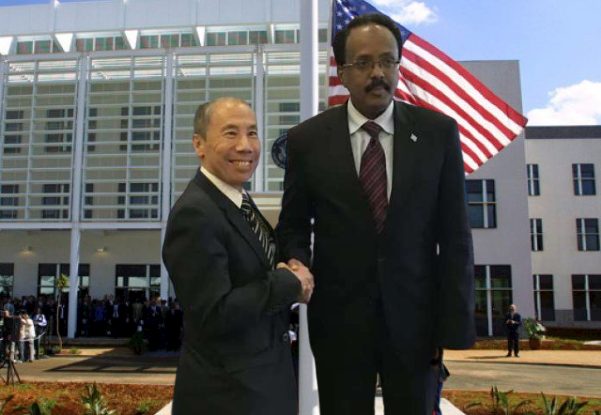 Federal Somalia President Mohamed Abdullahi Farmajo appears to have unwillingly accepted another round of talks with all federal states’ heads to thrash out a consensus on the controversy-mired parliamentary elections.

But US Ambassador Donald Yamamoto is apparently happy with how things worked out to his plan.

Following a meeting Farmajo had, Saturday, with the federal states Presidents of Puntland and Jubaland, Saeed Abdullahi Deni and Ahmed Islam ‘Madoobe’, at Villa Somalia, he reluctantly accepted to call regional presidents to Mogadishu – a matter which he actively sought to nib in the bud previously.

Deni and Madoobe, with the support of the international community, however, won the day.

That he call the regional heads to yet another roundtable conference to reach a common understanding palatable to all was one of two major conditions the two regional presidents forwarded to Farmajo as preconditions to a meeting with him. They said they had no desire to reach an agreement with him alone which can be later questioned by some or all of the other member states.

the other condition was that Farmajo federal army from Gedo – a condition which has been temporarily shelves to be raised at a more opportune time during Deni and madoobe’s stay in Mogadishu.

Farmajo, as a part of a bigger plan, to hold on to power wanted that selection of MPs be conducted in line with the roadmap he had drawn with loyal regional heads at end of Dhuusamareeb III on late August.

The international community at the head of which is the US Ambassador did not wish to swallow the Farmajo baiting hook and sink without a question. and this, especially, after his summary dismissal of the former prime minister.

Ambassador Yamamoto tweeted his view of the outcome of the Dni-Madoobe and Farmajo meeting:

This outcome – if nothing else – constitutes a partial face-save for Yamamoto who had been widely criticized for squandering US taxpayer money on yet another autocrat-on-the-make.