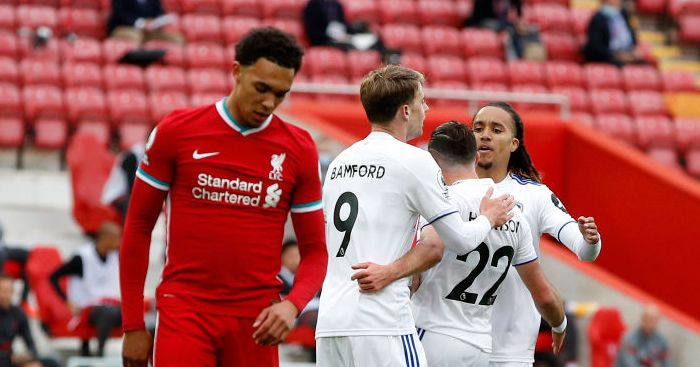 Jurgen Klopp has pinpointed the cardinal sin Liverpool committed in their battling victory over Leeds.

Their performance was littered with more mistakes than usual as Leeds capitalised on a couple of individual errors to score.

Klopp, who was full of praise for the opponents, aired his complaints with the first goal in particular, as Jack Harrison capitalised on a high defensive line to expose Trent Alexander-Arnold and finish cleverly.

“I said before the game we would struggle against them because the way they play is uncomfortable and it is different to all the other teams,” he said.

“If you don’t respect the opponent they kill you in a football way and I liked a lot the attitude of my team today. I have to say they just don’t stop, I like it.

“I didn’t see us struggling defensively but the way they play you cannot defend 100 per cent of the time.

“For the first goal both full-backs were deeper than the centre-halves and that should never happen in football. The second goal was a misunderstanding between Virgil and Ali and I don’t think we will see these situations very often.

“The third one we changed Hendo not long before and our formation was moving and we didn’t close one gap.

“The back line played for England, Holland and Scotland four days ago – all top teams but different ways of defending.

“And if things are not settled early in pre-season defending is not riding a bike – so there is space for improvement.”

Liverpool face Chelsea in their next game on September 20, before rounding off the month with a League Cup game on the 22nd and the visit of recent bogey team Arsenal on the 28th.