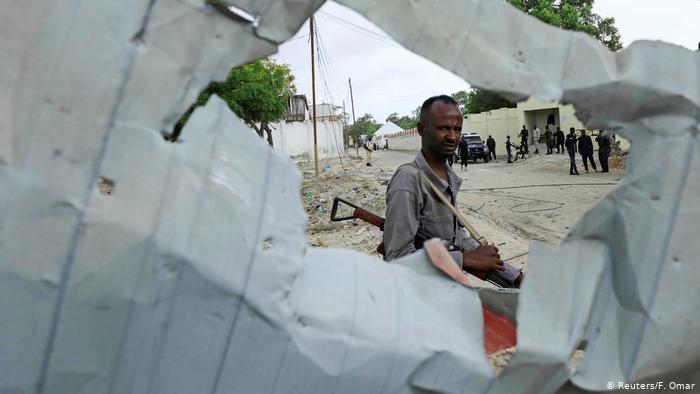 In the past week alone, Somalia has been the scene of over a dozen deadly terror attacks by al-Shabab. The Islamist militant group is seen to be bent on thwarting the forthcoming elections in the Horn of Africa country.

More than a dozen attacks by the Islamist militant group al-Shabab were recorded in Somalia this week, with civilians and military officers among the casualties. The upsurge in violence comes despite ongoing airstrikes by the US military on the group.

The attacks come as Somalis prepare to go to the polls for a staggered general election. The process is due to start with legislative elections on November 1 and culminate in a presidential election by the beginning of 2021.

The dates were announced on Thursday following the resolution of a drawn-out dispute over the electoral model between the federal government in Mogadishu and the leaders of regional states. After a series of talks, the two sides reached a consensus on an indirect election similar to that held in 2016.

Some of the leaders had pushed for universal suffrage, last in force in the country half a century ago. Somalis who have sought refuge abroad in the face of drought, famine and al-Shabab attacks and counterattacks had also hoped to return home to cast their ballots in a one-person, one-vote election.

An election amid insecurity

The legislative election will see 101 electoral delegates vote in the members of parliament, who will then elect the president. President Mohamed Abdullahi Farmajo’s mandate expires in February.

Political analysts predict a highly contested election and the kind of political bickering that for months held up the decision on the electoral model. The elections offer hope to a country that is recovering from around 30 years of civil war.

Security analysts are meanwhile warning that the vote is likely to take place against the backdrop of renewed insecurity. The recent stalled military operations in the war on al-Shabab have allowed the militants to regroup and launch significant attacks, according to analysts. On August 16, at least 15 people were killed when al-Shabab militants attacked a hotel in the Lido beach area of Mogadishu.

Targeted killings  — part of the group’s modus operandi  — have also increased. On September 11, a lone al-Shabab suicide bomber killed Shafi Rabbi Kahin, a senior Chamber of Commerce official in the southern state of Jubaland. Scores of people were injured in the attack. US troops based in the country have also been affected in the latest wave of attacks. A US military service member was injured in a car bombing at a military base operated jointly by Somali and African Union peacekeepers (AMISOM) and US military forces in the small town of  Jannay Abdalla near Kismayo.

In April, torrential rains and flash floods displaced tens of thousands of people across Somalia. The destructive weather also contributed to the heightened al-Shabab activities, according to Hussein Sheikh Ali, a former national security adviser and founder of the Mogadishu-based security think tank Hiraal Institute. “There was also the absence of countermeasures deployed by the allies, in this case,” Sheikh Ali told DW. “That, coupled with the rains and logistics that are inadequate for asymmetric warfare, has made it possible for al-Shabab to intensify its operations,” he said. Somalia’s war on al-Shabab is supported by African Union forces and the US military.

US military air raids targeting key al-Shabab militants and bases have continued. On August 25, the US Air Force said it had eliminated a senior al-Shabab militant identified as Abdulkadir Commando during an airstrike near the southern town of Sakow. Commando had reportedly held numerous positions within al-Shabab and recently served as a senior commander.

In a statement issued at the time, the commander of the US Africa Command (AFRICOM), Army General Stephen Townsend, said the airstrikes and targeted operations are critical to downgrading al-Shabab’s capability to spread chaos and violence in Somalia and beyond.

“The country is entering an uncertain election period due to no agreed model so far, which would further increase security vulnerabilities for al-Shabab to exploit and cause great suffering to the population,” General Townsend said. Military operations should continue to keep the pressure on al-Shabab, he added.

Read more: Al-Shabab attack on US air base in Kenya signals resurgence

Bent on thwarting the upcoming election

In recent months, the militant group beefed up its intelligence-gathering activities, with moles planted at government institutions. A year ago, a blind woman staff member of the former mayor of Mogadishu, Abdirahman Osman, came under suspicion when he was targeted in a suicide bombing.

Abdirahman Mohamud Turyare, the former director of the National Intelligence and Security Agency, believes that al-Shabab is exploiting the fragility of the institutions of government. The militants also want “to show that the situation is still out of control as part of a plan to thwart the election.” “Because of the increased attacks, our forces themselves are affected by the transition period because our government institutions have been dysfunctional for a long time,” Mohamud Turyare told DW. “We know that al-Shabab is now collecting more taxes. We know that they are recruiting more militia. We know that they are forcing nomads to bring capital and young people to fight for them.”

In the run-up to the elections, lawmakers are concerned about their safety. In various towns, militants have killed dozens of former election delegates.