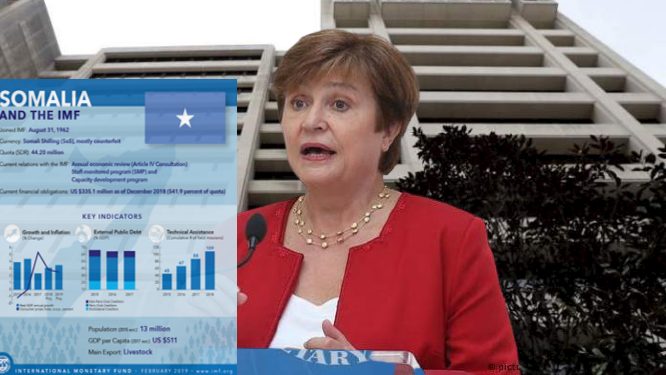 IMF Reaches a Staff-Level Agreement for the First Review of the Extended Credit Facility for Somalia subject to a follow-up Executive Board discussion and decision.

End-of-Mission press releases include statements of IMF staff teams that convey preliminary findings after a visit to a country.

Washington, DC:  A staff team from the International Monetary Fund (IMF), led by Allison Holland, held discussions with the Somali authorities during a virtual mission from September 12—22, 2020 on the first review of Somalia’s economic reform program being supported by an Extended Credit Facility (ECF) arrangement.

At the conclusion of the mission, Ms. Holland issued the following statement:

“During the first half of 2020, Somalia has been hit by multiple shocks—flooding, desert locusts, and the global coronavirus pandemic. These have aggravated the humanitarian challenges, and negatively impacted the economy and the government’s ability to mobilize domestic revenues.

“The authorities have taken a number of measures to mitigate the impact of these shocks on the Somali people and the economy. These efforts have been underpinned by critical support from the international community and include temporary tax relief on some basic food commodities; the introduction of a cash transfer system for the most vulnerable, Baxnaano; and the launch of a credit facility, Gargaara, for micro-, small-and-medium-sized enterprises.

“Despite the crisis, the authorities have sustained their strong commitment to economic reforms and have made satisfactory progress in implementing key policies under the Extended Credit Facility (ECF) program, supporting a staff-level agreement on the completion of the first review. All structural benchmarks and indicative targets for June were met, and all but one of the quantitative performance criteria (QPC). Cumulative domestic revenues through June for the Federal Government of Somalia (FGS) reached US$ 99 million against program target of US$ 109 million. The authorities will request a waiver from the IMF Executive Board for the missed QPC based on the measures planned to ensure domestic revenues recover in 2021.

“Staff commended the authorities on their continued progress on fiscal reforms, including in the areas of tax and customs administration, and ongoing efforts to enhance intergovernmental fiscal relations and transparency. The mission emphasized the importance of a formulating a 2021 budget consistent with the ECF-program objectives and urged continued control on operating expenditures to create fiscal space for spending on priorities identified in the authorities’ Ninth National Development Plan (NDP9). The mission and the authorities agreed a new structural benchmark that will underpin further improvements in general government fiscal transparency and accountability.

“The mission welcomed the newly appointed senior management of the Central Bank of Somalia and the progress being made on reorganizing the institution. It also commended the authorities on further progress on AML/CFT issues, including the ongoing work on the National Risk Assessment and efforts to build capacity at the Financial Reporting Center. The mission urged the authorities to expedite the licensing of the mobile money operators (MMOs) to advance the implementation of the mobile money regulatory regime. A new structural benchmark was agreed that will ensure greater transparency in the licensing of MMOs and the issuance of the underlying telecommunications licenses.

“Staff congratulated the authorities on the approval by the Council of Ministers of the National Anti-Corruption Strategy and its endorsement of the UN, African Union, and Arab League conventions against corruption. It urged swift Parliamentary ratification of these conventions to signal the country’s commitment to improving governance and fight against corruption.

“The mission appreciated the active efforts the authorities are making to reach agreement with their external creditors on debt relief consistent with the HIPC framework and outlined in the HIPC Decision Point document for Somalia.