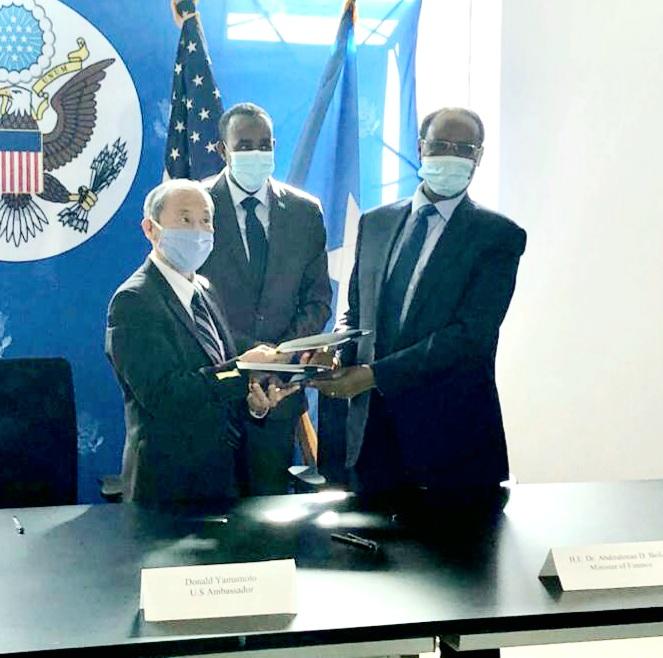 In a bilateral agreement the United States government signed with federal Somalia, Sunday, the US waived US$ 1 billion debt the latter owed it.

The agreement between the two sides was signed at the American Embassy in Mogadishu.

The interim minister for Finance of Somalia, Abdirahman Beileh and Ambassador Donald Yamamoto signed, respectively, for the two sides.

The newly-appointed prime minister of the FGS, Mohamed Hussein Rooble, was present at the event.

According to Ambassador Yamamoto, this was part of a huge debt Somalia owed to three US agencies.

Dr Beileh in a tweet, later, bragged about how successful Somalia was of late in convincing creditors to strike out debts owed.

Minister Beileh saw the debt cancellation on the part of the United States as another manifestation of ‘a strong supporter of our economic reforms’ as a testimony to a ‘Somalia committed to going forward’.  The rest of the world, though, can justifiably contest the veracity of this latter assertion.

It was an honour to sign the debt relief agreement between #Somalia & USA today following the successful Paris Club discussions in March 2020. It was witnessed by @SomaliPM @MohamedHRoble.
The #USA is a strong supporter of our economic reforms. We are committed to going forward. pic.twitter.com/QVzJOPWkY8

The United States was Somalia’s largest creditor. Much of that $1 billion debt to the U.S. which was cancelled today was owed to the Pentagon, because funds were used primarily for military purposes – not development – in Somalia in the 1980s.

The United States, besides actively waging counter-offensives and airstrikes against Al-Shabaab of Somalia to help keep the weak Somalia government in office, has lately made known that it alone had sunk over US$ 5 billion to support it boost its security capability.

In all, Somalia’s debt to the IMF, the World Bank, the US, the Paris Club, and European creditors amounted to some US$4.6 billion.

A spree to free Somalia of the burden of debt has taken momentum this year with most creditors striking out huge amounts from their ledgers.

It was only last week that an IMF team sent to Mogadishu to assess how meriting the country was to extended credit facilities recommended that it was possible.

Inexplicably, while the world can be commended in its attempt to bail out Somalia from the grave it dug for itself during the past 30 years, it miserably failed in according a fraction of the billions pouring into Somalia to a highly successful, established democracy next door – the Republic of Somaliland.

All the benefits accrued from debt relief go to Villa Somalia – and none to Somaliland showing how hypocritical the international community could be about peacebuilding, development and the promotion of democracy.