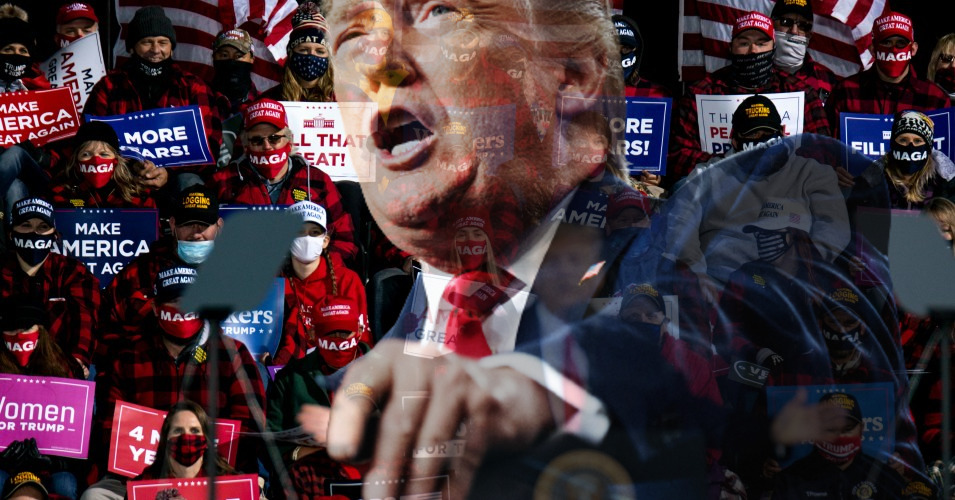 When Donald Trump refused to condemn white supremacist groups at the first presidential debate, many people were shocked and outraged. The outrage was obviously justified, but no one should have been surprised—Trump has made it as clear as possible over the last four years that he’s a racist who might as well have made his campaign slogan “Make America White Again.” We know this because of his long history of demonizing minority groups and making excuses for neo-Nazis, and because, fresh off telling the Proud Boys to “stand by,” he spent most of a Wednesday night campaign rally in full-on white-power mode.

Speaking to supporters in Duluth, Minnesota, Trump warned that Joe Biden wants to “inundate” their state with refugees (read: nonwhite people) and then attacked Representative Ilhan Omar, whom he spent a good chunk of last year telling to “go back” to Somalia, despite the fact that she’s been a U.S. citizen since 2000.

“Another massive issue for Minnesota is the election of Joe Biden’s plan to inundate your state with a historic flood of refugees,” Trump told the crowd. “Biden and Crazy Bernie Sanders have agreed on a manifesto…it’s the worst thing you’ve ever seen. But they’ve pledged a 700% increase in refugees…and what about Omar…what is going on with Omar, I’ve been reading these reports for two years about how corrupt and crooked she is…. Then she tells us how to run our country, can you believe it? How the hell did Minnesota elect her? What the hell is wrong with you people? What the hell happened?”

Pointing to a man in the audience, Trump asked, “Are you a big fan of Omar? I don’t think so. Stand up—look at this guy, nobody’s going to fight him, I don’t think you’re a big fan of Omar. No, she’s been crooked for a long time…and you know what? AOC also…you take a look at the corruption, the disgusting corruption; 700% increase, refugees, coming from the most dangerous places in the world including Yemen, Syria, and your favorite country, Somalia…Biden will turn Minnesota into a refugee camp.”

Unsurprisingly, Republicans offered tepid concerns about the president’s racist bender this week, with Senator Mitch McConnell saying—without mentioning Trump by name!—that it is “unacceptable not to condemn white supremacists,” and Senator Lindsey Graham saying the president should “make it clear Proud Boys is a racist organization antithetical to American ideals.” Of course, Trump could show up to the next debate wearing a white hood and Republicans would probably still support his candidacy, so there’s little to no chance that any of this will actually come back to haunt him in that regard, though it may give pause to voters who think the president shouldn’t regularly blow a piercing dog whistle to people who think there’s a master race.