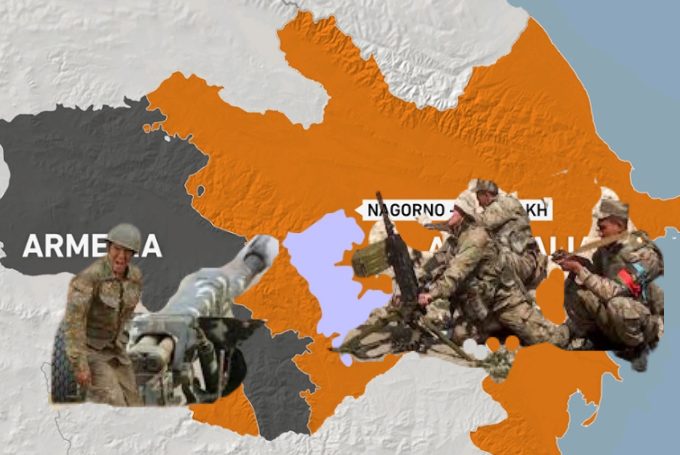 Facebook
Twitter
Pinterest
WhatsApp
The strong conflict between Armenia and Azerbaijan, in the autonomous Azerbaijani region of Nagorno-Karabakh/Artsakh, which is under the control of Armenia, was renewed recently.

The latest conflict between the two countries has escalated and there are no indications that it will calm down, at least not in the foreseeable future. The question being imposed is why is this old conflict, which was at a standstill (frozen conflict) after the serious fights between 1988 and 1994 and in April 2016, being renewed now.

Armenia, which controls the disputed region, is satisfied with the status quo, while Azerbaijan, which is rich in energy resources and whose defense expenditures exceed the entire Armenian budget, now threatens to use military force to regain control over the lost region.

The question to be asked is why has this regional conflict, which can have broader dimensions with the siding of Turkey with Azerbaijan and Russia with Armenia is now being activated. This conflict is much more than a conflict between just two countries over a border strip areas, as it is a fight among a group of countries over control of the entire region of Caucasus.

Historical overview of the conflict

The Nagorno-Karabakh region is a striking example of problems caused by the collapse of the Soviet Union (USSR). In the early XIX century, the region had become a part of the Russian Empire after the defeat of the Persians and their formal ceding of the Nagorno-Karabakh region to the Russian Empire on the basis of the Treaty of Gulistan (1813). The region with predominantly Armenian population was given autonomy in the Soviet period (1923) but within the Azerbaijan Soviet Socialist Republic.

With the emergence of signs of collapse of the communist rule of the USSR, people’s representatives in the parliaments in Armenia and Nagorno-Karabakh decided in 1988 to unite the region with Armenia. Azerbaijan refused such an idea and abolished the autonomy that the region had enjoyed and subsequently deployed its military forces, which led to a breakout of war that lasted from 1992 to 1994 and caused the loss of this region together with seven neighboring regions, which comprise about one fifth of the territory of Azerbaijan, as well as forcible displacement of around million Azerbaijani citizens from the occupied areas to other parts of Azerbaijan.

Despite the signing of the Bishkek Treaty in 1994, which ended the war, with mediation of the Minsk Group [2] , led by France, United States and Russia, the conflicts did not cease. Furthermore, Armenia has still not implemented three United Nations resolutions related to its withdrawal from the areas it had occupied in Azerbaijan.

Turkish role in the conflict

The position of Turkey has been clear ever since the inception of the crisis. Namely, it has been extending support to Azerbaijan. After the recent developments, the Turkish President announced full support of the country to Azerbaijan. Russia, from its side, wants to relax the tensions between the two countries with which it has had special relations ever since the period of the Soviet Union and called on them to return to the negotiating table the sooner the better.

As far as the support of Turkey to Azerbaijan in this conflict is concerned, analysts believe that Turkey is trying to justify itself with the facts of the historical dispute between Turkey and Armenia in relation to the genocide committed against Armenians by the Ottomans in World War I and the close historical and ethnic relations between Turkey and Azerbaijan. The Azerbaijani people (Azeri) belong to the Turkish group of people of Islamic religion, despite the differences in the Medhhab doctrines (religious school of thought). Specifically, Turkey has a Sunni and Azerbaijan a Shia majority.

Official Ankara wants to have a stronghold in the Caucasus region in order to get a better outcome in the talks with Russia. Specifically, it wants to get concession in the civil war in Syria and Libya, as well as the crisis with Greece over exploitation of natural gas in Eastern Mediterranean, in which Ankara and Moscow are on opposite sides.

With the relative relaxation of the situation in Syria and Libya achieved after the US and German had put pressure on Libyan parties, it is to be expected that the Turkish President Recep Tayyip Erdogan (AKP) will, once again, this time in the Caucasus region, be faced with his “friend and adversary” – Russian President Vladimir Putin.

Iran sided with the Christian Armenia, despite the existence of cultural, ethnic and religious connections between Teheran and Baku, where more than a third of Iranians are Azerbaijanis in the Western Azerbaijan, province of Iran, and majority of Azerbaijanis are Shia, like Persians in Iran.

Iran and Azerbaijan share a border that is more than 760 kilometers long and a part of the Caspian Sea, which is rich in oil and natural gas.

Teheran hopes to weaken Azerbaijan, so that the Azerbaijani minority in Iran would not request more rights or show aspirations for unification with their homeland. Iran has strong economic relations with Armenia, based primarily on import of oil, natural gas and electric energy from Iran.

At the same time, Iran is also concerned by the Azerbaijan-Israel relations in the defense area, particularly as Israel, a mortal enemy of Iran, is present at its northern border.

Russian role in the conflict

Armenia is currently Russia’s only Orthodox-Christian strategic ally in the Caucasus and one of the few countries in which Russia has presence. In the opinion of Armenian politicians and defense experts, the Russian military presence in Armenia is an important component of Armenian national security.

As Russia and Armenia are allies, that is two strategic partners connected through numerous agreements in the defense area, it would be expected that Russia should take into account the geopolitical and strategic interests of its ally of Armenia. However, just the opposite is happening in practice. Specifically, Armenian main adversary in the region, Azerbaijan, is buying 40% of weapons from Russia, which is Armenia’s most important strategic partner.  It is interesting that the weapons that Azerbaijan is buying from Russia are predominantly offensive and not defensive weapons.

The resignation of the Armenian Prime Minister Serzh Sargsyan from his position under the pressure of mass protests in 2018 in Erevan has led to the question whether Armenia will leave the sphere of Russian influence on the former Soviet area, that is repeat the scenarios seen in Georgia and Ukraine, or will Moscow become the main actor in this republic at the south of the Caucasus region.

Although the new Armenian Prime Minister Nikol Pashinyan is undoubtedly of pro-Western orientation, Armenia has no alternative to the alliance with Russia because of the vicinity of its historical adversaries of Turkey and Azerbaijan.

Armenia is an important ally of Russia on the territory of the former Soviet Union. Armenian economy largely depends on Russian investments and remittances from Armenians residing in Russia. Namely, around 2.5 million Armenians live in Russia.

Analysts believe that the disputed Nagorno-Karabakh region is a kind of a “time bomb“, which will not explode as long as Armenia is a military ally of Russia.

Stances of US and EU

As for the US position in the conflict, the US is neutral and trying to resolve the conflict between the two countries. After the recent developments, Washington condemned the escalation of violence between Azerbaijan and Armenia, and called on both sides to end the hostilities.

The stance of the European Union and the US is the same. Specifically, that the conflict should be ended in order to prevent interruptions in the supply of oil and natural gas from the Caspian Sea.

In this conflict Israel has sided with Azerbaijan. Israel has been one of the strongest allies of Baku since 2011 and sells significant amounts of weapons and military equipment to Azerbaijan.

Analysts believe that Azerbaijan is the new point of conflict and rivalry between Iran and Israel, because Israel already has marked presence in the vicinity of Iranian border.

In the opinion of the analysts of the IFIMES international institute, when it comes to military balance of forces, Azerbaijan has leverage over Armenia, because it has developed its military forces and procured modern weapons from Russia, Turkey and Israel- capitalizing on high oil prices over the past two decades. Analysts downplay the possibility of launching of a major military campaign taking into account that Armenia is a member of the Collective Security Treaty Organizations (ODKB/CSTO)[3] , which was established by Russia in 2002.

Leading global powers should intensify the efforts through the UN Security Council and the Minsk Group to stop further development of the conflict and its escalation into a bigger and broader war. One of the main reasons for the current escalation of the conflict is the lack of active international mediation between the two sides.

Russia and Turkey should repeat their mediatory missions using the model of their cooperation in Syria, where Turkey has sided with the opposition, while Russia offers military and political support to the government in Damascus.