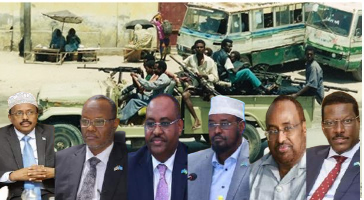 The agreement on the electoral model paves the way for the 2021 elections in Somalia. Agreeing on election modalities and schedules is a progress in the eyes of many Somalis but a setback for others. On the thirtieth anniversary of the state collapse, Somalia may have elections modeled on 1991 reconciliation conference principles that gave primacy to armed, clan-based organisations.  The exclusion of Somali clans known as Others from the agreement speaks volumes about the elevation of clan identity for self-proclaimed powerful clans above the Somali citizenship.

The 4.5  power-sharing (disempowering, to be exact) system is the foundation stone for the electoral agreement. The Electoral Law (now abrogated) passed by the Somali Federal Parliament was all along incompatible with one person, one vote elections. An attempt to conduct a more enhanced election has yielded an ignominious return to less enhanced elections.

There are some lessons one can learn from how the incumbent Federal Government of Somalia cashed on its early progress on good governance, of which limited security reforms is the most cited example, to consolidate and centralise its power without foreseeing the backlash from the Federal Member States particularly  Puntland and Jubaland.

National sovereignty does not make much sense if a government does not control the whole country. The Federal system has been a response to lessons from the state collapse — dispossession, displacement,  famine as well as pre-state collapse pathologies such as underdevelopment and political oppression — to build institutions gradually. The first violation of this approach emerged when Puntland lobbied for the end of the transition in 2012 without sound agreements in place. The permanent Somali government formed in 2012 had failed to honour its pledges to conduct one person, one vote elections, not because it was incapable of running the country but it was using a centralist mindset in a country that has become irreversibly federal in the sense that power at the centre drives legitimacy from political structures that formed in one-time peripheries such as what is now known as Puntland and to a large extent Somaliland.

A federal system takes off in a country when all parts of the whole possess political institutions that have a lot in common. Disparities in state-building made the federal system in Somalia dysfunctional and deepened the plight of underrepresented and marginalised Somali social groups.

No system makes a country politically and economically vibrant.   The debate on the system of governance appropriate to Somalia misses the point. “Institutions are built for people, not people for institutions.  The kind of political class … [a society has]…, their values, their orientation, their behaviour, their attitude to the society” determine political outcomes, argued Abdul Raufu Mustapha, the late Associate Professor of African Politics at Oxford University.

Since 2004 there have been two influential schools of thought about rebuilding the Somali state. One is based on the federal system proposed by Puntland in 1998; the other belongs to the governance structures introduced in Mogadishu by the clan-based Islamic Courts, a forerunner of the Union of Islamic Courts. Neither form of government has successfully taken root in Somalia. What Somalis have had since 2009 is a fusion of the two, a return to a form of low-key politics that resemble the 1990s warlordism.

Why do the World Bank and IMF promote debt relief for a country whose political leaders thrive on a two-tier political system, one that rewards some social groups, and another that marginalises a segment of the society?    Declarations about progress towards debt relief belie the work of political scammers ( qalin shubato siyaasadeed) at all levels in Somalia.

Complications of the flawed political system of Somalia delay possible progress in Somalia-Somaliland talks. How can Hargeisa be persuaded to abandon its secession dreams when many social groups in south Somalia remain politically marginalised and victims of dispossessions and displacement?

Somali political leaders have a conception of national sovereignty as brokerage to a point that national infrastructures have become possessions of clans.  They view the sovereign status of Somalia as a means to minting a fortune from agreements signed with companies at the expense of efforts of creating durable institutions and promote political accountability at the federal government and federal members state levels. Somalia’s International Partners should not be funding institutions that leave a segment of the Somali society in a state of political marginalisation.