Three luminaries who had been conspicuously left out of the Central Committee list of the ruling party – Kulmiye – ostensibly for not bending from the waist down to President-cum-Party Chairman Bihi’s will, today, spoke of what they thought of the current leadership, tolerance, and farsightedness (or rather lack of it) of the incumbent president and party chairman.

Mohamed Eid Dhimbil – along with Hashi – was one of the  founders and mong the longest serving officers of the party since its inception in 2002. 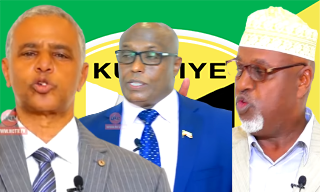 Qabyitire, who served as planning minister in the last government – painted a doleful picture of the future of the party and how unlikely it was that it could survive the aggravated leadership of its chairman, the current president of the Republic of Somaliland.

The ex-minister stated it was beyond him to understand how a sitting president can actively deny economic opportunities to the people he led and give it gratis to foreign entities.

“The President inexplicably took over the Berbera Oil Terminal when he cam to power only to give it barrel, lock and stock to a shady, corrupt foreign company called Trafigura under the table,” he said.

He also revealed how the president’s intransigent denial of Air Duba and Al Arabia airlines to resume flights after Covid-19 restrictions were lifted shut down not less than 42 travel agencies.

“Imagine how many employees have lost their livelihood due to their President’s inflexible decsion?,” he stated.

Mr Qabyotire narrated a few stories which highlighted how dictatorially the President has directed the slection of theparty’s central committee members folowing its 4-5 October convention.

He pointed out the one-track-minded – as he put it – decision-making process of the president has more than amply amplified by how that selection was made leaving out founders, high-profile supporters  and critical voices within the party on a criteria based on who loved, disliked or was a threat to the dictation of the elader.

He pointed out the President-cum-chairman was intolerant of other people’s opinions and had manifested characteristics which he likened to those of a sadist.

“The country, its reputation – both locally and internationally – suffered under his leadership since he came to power because of his agro, scowling, always-angry attitude towards almost everybody who did not make a perperual litany of his praises,” he said.

Mr Qabyo, specifically, pointed how shabbily the President handled the Khatumo peace deal which was penned during President Siilaanyo’s time, and how the President all but ignored the consistent warnings of professor Ali Khalif Galaydh, its leader, who passed away on 8 October in JIgjiga bitter, dismayed and disappointed of the President’s cold shoulder.

“The seven-member committee tasked to liaise the deal summarized pointe opf action that needed to be implemented to twenty-two points. The President chose to shelve them,” he said.

“..and, mind you,” he added,” President Musa was a member of the negotiating team who struck the initial deal with Khatumo during the former government’s time”.

Mr Qabyotire, continuing to underline, the commitment, patience, inclusive attitude, farsightedness of the former leadership of the party and, partuclarly, that of its founding father, said nothing of those qualities presently existed in the new-type Kulmiye which President Bihi forged.

“The President-Chairman,” he said, “is wearing the beautiful Kulmiye shirt inside out – and has even changed its design”.

“It suffices, too”, he said, “how President Bihi pitted a minister in his government against the incumbent Vice President for the 4th vice chairmanship of the party.

“The President failed to honour the VP elected with him on the same ticket, right next door to his office – the very man (Allah forbid) who would assume the presidency if anything happened to the President,” he said.

Observers have noted that the new roster of the central committee of the party boded ill for the party’s longevity and viabilioty as as strong party that can defeat even a moderately credible opposition in the future.

President Bihi has already held the Chairmanship of the party since Aiugust 2010 – when he was elected to the post. The new election to the same post would add another 5 years to the 10 past which means a complete, unelected, illegitimate term wasted in betweeen the two conventions. To many, the trend surfacing is not only appalling but fearfully alarming, too, leaving a large portion of the President’s electorate despondent and distrustful of the party future.