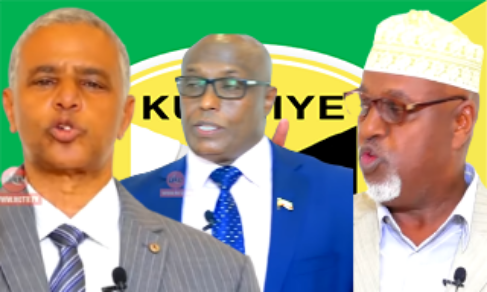 Politicians who had hitherto been among the most notable in the ranks of the ruling party of the Republic of Somaliland, Wednesday, placed a number of question marks on the leadership of President Musa Bihi Abdi of both the country and the party to which he was again elected a chairman.

Between them, Mohamoud Hasi Abdi, Mohamed Eid Dhimbil, and Mohamed Ibrahim Adan ‘Qabyotire’, trained focus on many areas that put the president’s leadership in the spotlight.

They spoke at length of the president’s growing intolerance of critics and criticism. they elaborated on shady deals which the government he led entered with foreign companies. They narrated his handling of the recent party convention and, subsequently, the selection of the party’s central committee.

Above all, the politicians all spoke at length of how the President’s actions all pointed to an autocratic attitude which they said was a stark departure of the nation’s – and the party’s – customary devotion to tolerance, consensus leadership, and a genuine adherence to national unity.

They, also, most notably pointed out all the signs led to an understanding among the public that the President was out to enrich himself and his immediate family at the expense of the people he led.

“Mr President, you are on the eclipse of your lifetime and yet much of your action points to personal enrichment. Please stop and devote yourself and your energies, instead of to leading your people to shared, good-for-all property,” Mohamoud Hashi said at the joint conference the three politicians held yesterday.

By way of example, the politicians – especially Qabyotire – raised how the President has closed down going business concerns not giving a moment’s thought to the hundreds even not thousands who eked their living out of them – directly or indirectly. FlyDubai and Al Arabia airlines, they said, were denied to resume their flights on the slimmest of pretexts.

Trafigura was given concessions to run the Berbera Oil Terminal and import oil in direct abrogation of a parliament bill which returned the management of the terminal to local business people in 2015. Neither was the agreement reached with the Swiss-owned internationally tainted company publicized, justified, or approved by parliament.

Hashi drew an analogy of an old woman and her son who slaughtered a camel for their use. The son proposed that the meat should be seasoned – cooked, roasted, and barbecued so that it can last longer. The mother insisted that they should not even skin the slaughtered camel but that they cut out what they need for consumption on a daily basis, and cover the rest.

Only a day or two later the smell of putrefaction pervaded their home.

“What is that unpleasant smell,” the mother asked the son.

“It is your bad decision/advice, mum,” the son replied.

Drawing on this Mr Hashi cautioned the President to not be disturbed by the bad smell of his decisions when they catch up with him later.

“You have only yourself to blame. Bad decisions and actions have an uncanny, inavoidable tendency to boomerang on the perpetrator, Mr President,” Hashi said.

Mohamed Eid Dhimbil, who has served the Kulmiye party on several high-profile positions since 2020, spoke of how the party weathered difficult, transitory periods through sound leadership, perseverance, tolerance, and a policy which accommodated often divergent opinions and critical views without antagonizing or expelling members for them.

Revenge and recrimination were alien to the party before President Musa Bihi assumed leadership of the party in 2010.

Mr Dhimbil recalled how they have received politicians whose political associations did not make to recognition as national parties. He particularly called to mind how the Kulmiye leadership welcome to the ranks of the party politicians such as Musa Bihi whose SAHAN party failed and Mohamed Kahin of ASAD.

Musa and Kahin are, presently, the Chairman and the First Chairman a Kulmiye who has ousted the very politicians who received them when theirs were defeated was a message, it was apparent, Dhimbil wished to subliminally insert into the calculated reminiscence.

Mr Dhimbil to – obviously – illustrate how inconsiderate and selfish Chairman Bihi could be, again, remembered how on the last Central Committee meeting to decide party presidential candidates before the 2010 elections. Musa insisted that he be given the Vice Presidency ticket.

“The logic that both the presidential and vice-presidential candidates to belong to the central clan can only come from somebody who had no intentions of keeping the country together or an accommodation of other clans in the nation,” he said.

“It took us a year to convince him of the impracticability of the idea. This may be a surprise to many who never heard of the incendiary situation,”  Dhimbil stated.

All three politicians were of the opinion that neither the party nor the nation can survive what they called the reckless, tactless incumbent leadership for long.