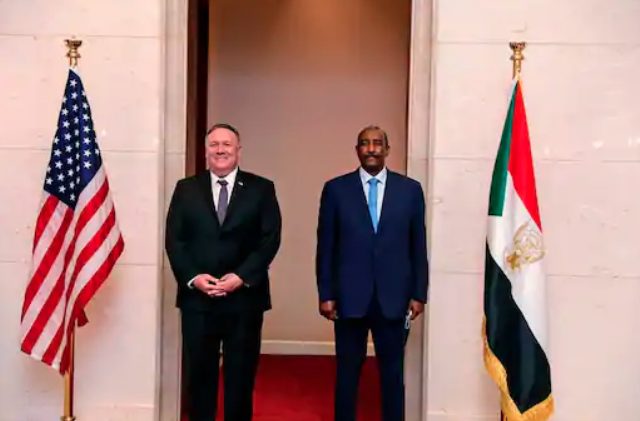 On its face, President Trump’s new opening with Sudan looks like a diplomatic win. He announced Monday that his administration will remove the African nation from the U.S. list of state sponsors of terrorism, where Sudan has languished for 27 years. The delisting is undoubtedly good news for Sudan — the designation barred its government from international dollar transactions and curbed its ability to procure foreign investment, aid and loans.

Meanwhile, Trump now has another “America First”-style victory to tout at Thursday’s presidential debate. As part of the White House’s agreement with Khartoum, Sudan will pay some $335 million in restitution to the families of American victims of terrorist attacks targeting the U.S. embassies in Kenya and Tanzania in 1998 and the USS Cole in 2000. Sudan, at the time, played a role in hosting al-Qaeda-linked militant networks. On Tuesday, the governor of Sudan’s central bank confirmed that those funds had already been transferred and were awaiting disbursement.

Sudanese Prime Minister Abdalla Hamdok welcomed the removal of the designation as part of the country’s transition toward democracy and shedding of the dictatorial legacy of ousted Sudanese President Omar al-Bashir. A military coup in April 2019 forced Bashir out of power following months of mass protests against his regime. Over the weekend, Sudanese authorities hosted a delegation from the International Criminal Court and its chief prosecutor, Fatou Bensouda, as they discussed scenarios in which Bashir could go on trial for crimes against humanity and genocide. (Ironically, the Trump administration recently slapped sanctions on Bensouda and the ICC — yet another squabble with an international organization.)

But for the White House, there’s a far different prize in mind. Trump and his allies expect the thaw with Sudan to eventually lead Khartoum to normalize relations with Israel. For months, diplomats have wrangled in private over when and how Sudan could join the handful of Arab states that have established formal contacts with the Israelis. One of those states, the United Arab Emirates, has played an outsized role both in helping broker the rapprochement between Khartoum and Washington and in cajoling the Sudanese down the path toward normalization.

The symbolism of such a move would be inescapable. In 1967, Khartoum played host to dignitaries of the Arab League who, in the aftermath of the Arab-Israeli War, announced the “three no’s” resolution — that is, no peace with Israel, no recognition of Israel and no negotiations with Israel. The situation shifted over the decades, but Sudan remained a conspicuous Israeli opponent and lent support to militant groups operating against it.

Now, the country’s military leaders who replaced Bashir — including figures also linked to a brutal history of war crimes and human rights abuses — are in many instances closely allied to the Emiratis and Saudis. Last year, the financial aid extended by these oil-rich monarchies helped bolster Sudan’s interim regime in the face of concerted pro-democracy protests.

“Sudan’s international realignment has been swift. Within less than a year, the clients of Qatar and Turkey in Khartoum lost any role in policy,” wrote Jean-Baptiste Gallopin of the European Council on Foreign Relations earlier this year. “Financial support from Saudi Arabia and the UAE gave the generals crucial leeway to resist popular demands for civilian rule, shaping a lopsided balance of power that allowed the generals to navigate a period of mass mobilization.”

The democratic transition that civilian politicians like Hamdok are trying to steer remains fraught, not least because of a string of fresh crises afflicting an already war-ravaged country. “The delisting comes at a crucial moment of economic vulnerability for Sudan,” wrote my colleagues. “Inflation has spiraled past 200 percent, and basic items including wheat and gas are in short supply. In some cases, lines at food stores and gas stations stretch for miles. Meanwhile, the worst flooding in a century has left more than half a million people homeless and destroyed a season of harvest. Pandemic-related border closures have dramatically reduced exports and driven up unemployment.”

Sudan’s civilian leaders would probably rather make a clear decision on Israel much later — possibly after the country holds elections in 2022. Yonatan Touval, senior foreign policy analyst at the Israeli Institute for Regional Foreign Policies, wrote in Haaretz that the Trump administration’s “bullying” of Sudan to normalize ties with Israel soon would probably embolden both the military, on the one hand, and Islamists, on the other. It would confirm the former’s ironclad grip over national security, while helping the latter rally public opposition under their banner.

“For rather than heralding a thriving relationship between the two sides, the aggressive manner in which the Trump administration is forcing Sudan’s hand risks undermining the country’s delicate process to democratic rule, strengthening its military over the civilian stakeholders, enhancing the appeal of Islamist groups, and, ultimately, dooming any relationship between Israel and Sudan to a premature and precipitous end,” Touval wrote.

Experts in Washington bemoan the Trump administration’s inattention to Sudan’s deeper democratic transition. According to Foreign Policy’s Robbie Gramer, career diplomats and officials in the State Department’s Africa bureau were left out of negotiations as the White House and its allies pressed the reluctant Sudanese on Israel.

“Washington should already have delivered the kind of political and economic relief necessary for Sudan’s make-or-break transition to succeed,” Zach Vertin, a nonresident fellow at the Brookings Institution, told my colleagues. “Instead, the Trump administration held out, extorting a fragile democracy in the service of its own domestic political ends.”

Trump is operating on a narrow timeline, but some Sudan watchers are hoping for a change in approach. “In the two weeks left before election day, the Administration would do well to frame Sudan’s unshackling from its terror list as not merely a one-off diplomatic win or an added vindication of its Middle East peace plan, but instead, as a step towards the greater cause of achieving peaceful democratic transition in the Horn of Africa and beyond,” wrote Cameron Hudson, senior fellow at the Atlantic Council. “This would be a stark departure from the administration’s overall indifferent approach to democracy promotion and a small, albeit, counter to the narrative that Washington values stability over democracy.”

Ishaan Tharoor is a columnist on the foreign desk of The Washington Post, where he authors the Today’s WorldView newsletter and column. He previously was a senior editor and correspondent at Time magazine, based first in Hong Kong and later in New York. Follow

Ethiopia. Tigray War Is All About Economic Power