Following his stunning retirement after his most recent title defense, tributes have poured in to praise the undefeated Ultimate Fighting Championship (UFC) career of Khabib Nurmagomedov.

After defeating Justin Gaethje at UFC 254 to defend his lightweight title, Nurmagomedov announced he would retire with a perfect 29-0 career record and 13-0 UFC record.
“Today, this was my last fight,” he said. “Ain’t no way I’m going to come here without my father.”

Nurmagomedov’s father and coach, Abdulmanap, died in July after complications from Covid-19. Nurmagomedov said he talked with his mother for three days before deciding to accept the fight with Gaethje.
READ: Conor McGregor says his next opponent will be Manny Pacquiao
Nurmagomedov’s contemporaries have praised him since he shocked the UFC world.
Conor McGregor, who lost to Nurmagomedov in 2018, congratulated the 32-year-old and paid his respects to his father.
“Good performance, Khabib,” the Irishman said on Twitter. “I will carry on. Respect and condolences on your father again also. To you and family.”
Former UFC champions Daniel Cormier called Nurmagomedov the “greatest champion in UFC history” while Jon Jones — who has successfully defended his own UFC titles 11 times — said the Russian’s retirement in the octagon following his victory over Gaethje was a “powerful moment.”
“I want to congratulate Khabib for an outstanding career. I know he made his father, along with millions of fans around the world, incredibly proud today. May God continue to bless him on his journey.” 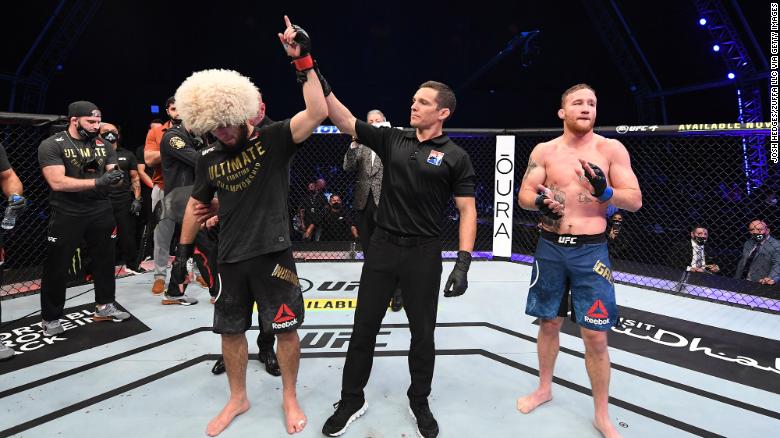 Nurmagomedov celebrates his victory over Gaethje.
Current UFC heavyweight champion Stipe Miocic called his career a “pleasure to watch,” while British fighter Darren Till said Nurmagomedov was among the best ever Mixed Martial Arts fighters of all time.
“Getting emotional watching this. Wow. Khabib respecting his mother and following through with his word. What a man. Deffo a top 5 goat of MMA. Happy retirement.”
Shortly after his victory, Nurmagomedov posted a photo of himself with his father on social media with the caption, “When ALLAH with you, nobody can broke (sic) you, nobody. Thanks Father for everything, you teach all my life, may ALLAH grant you the highest Paradise.”
“She don’t (want me) to go fight without father, but I promised her it’s going to be my last fight,” he said in a post-match interview. “And if I give my word, I have to follow this.”
He also said it was his first time fighting without his father.