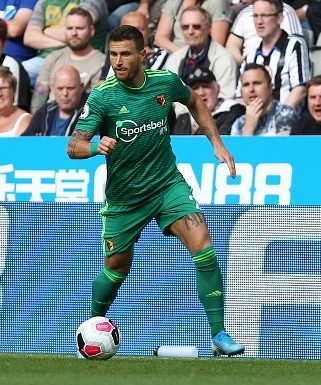 Liverpool has reportedly been offered the chance to sign free agent Daryl Janmaat in an attempt to bolster up a much-depleted defensive unit at Anfield.

Joe Gomez is the latest significant casualty to add to Jurgen Klopp’s growing list of injury setbacks after the England international underwent surgery on a knee injury in London on Thursday morning.

The Reds have refused to put a time-frame on the injury although it was stated on Liverpool’s official website that Gomez is expected to be ‘out for a significant part of the remainder of 2020-21.’

He joins a group of defensive casualties which includes the likes of Virgil van Dijk – who is also expected to miss a large chunk of the season with a similar injury – as well as Fabinho and Trent Alexander-Arnold.

Fabinho, 27, has missed Liverpool’s previous three matches following a hamstring issue sustained during the 2-1 win against FC Midtjylland last month while Alexander-Arnold, 21, went down with a calf problem at the Etihad Stadium on Sunday.

Liverpool are down to just Joel Matip and Andy Robertson as the club’s only recognised and experienced defensive options – and now, TeamTalk reports that the Reds have been offered the chance to sign free agent Janmaat.

The 31-year-old is without a club after his contract with Watford expired earlier in the summer.

The report claims that the Dutch right-back has been offered to Liverpool with a glowing recommendation from Janmaat’s countryman and Reds midfielder Georginio Wijnaldum – whom he played with during their time together with Newcastle United.

Certainly, Janmaat could be a short-term solution for Liverpool, offering cover at both right-back and in central defence.

What RTK has to say

Indeed, Liverpool are in urgent need of cover in defence and desperate times can sometimes call for desperate measures.

The last time Klopp was forced to make a quick defensive purchase was back in 2016 when Liverpool brought in Steven Caulker on loan from QPR.

Adding Janmaat to the Premier League champions would provide a similar underwhelming sense of deja vu for supporters as the former Watford defender cannot be expected to act as a short-term solution to Liverpool’s defensive woes.

It is worth noting that even in the absence of three recognised centre-backs, Liverpool still have the like of Rhys Williams and Nat Phillips eager to step up while Billy Koumetio and Sepp van Berg are among other options from the academy.

How Much Do Liverpool Players Earn Per Week?