Home World News/International Politics/Diplomacy How Many Countries are There in the World? Is Somaliland One? 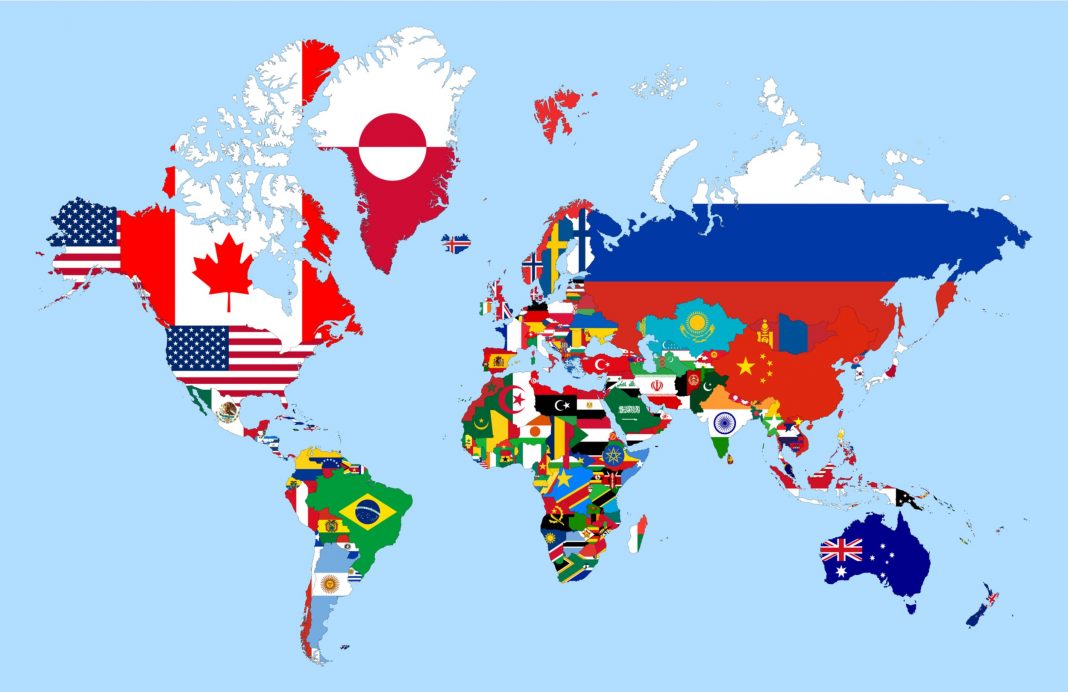 Officially known as the “Republic of Somaliland”, Somaliland is a self-declared country on the coast of the Gulf of Aden. Somaliland declared independence after the overthrow of Somali military dictator Siad Barre in 1991.

If you ask different countries across the globe ‘how many countries are there in the world’ you’ll find that the numbers don’t match one another.

There are 193 members of the United Nations (U.N.) plus two non-member countries with permanent observer states, the Holy See (The Vatican) and the State of Palestine. So, according to the U.N. there is a grand total of 195 sovereign states in the world today.

As such, the total number varies depending on the source. To complicate a seemingly simple question even further, some people use different definitions of what a country is.

The Oxford Dictionary defines a country as “a nation with its own government, occupying a particular territory.” A country may also refer to a certain population with its own identity, traditions, and common cultural background. For the purpose of this article, we’ll define a sovereign nation as a state with its own borders and ability to sign treaties, as well as the ability to operate diplomatically with other countries.

Most crucially of all, a nation needs to be recognized by other members of the United Nations in order to be considered a country. Otherwise, anyone with an island could proclaim themselves the sovereign leader of their own fabricated country, which isn’t to say it’s never happened before.

Since 1990, 29 new countries have appeared on the world map. Almost half of these came about from the break-up of the former Soviet Union and Yugoslavia. The last time the number of full U.N. members changed was when South Sudan joined in 2011 while Palestine became a UN Observer State in 2012.

The number of countries in the world with partial recognition

There are some gray-area states — let’s call them country candidates — which aren’t members of the U.N. but which have nonetheless been recognized by at least one U.N. member. In official parlance, this is referred to as diplomatic recognition. The reason why these countries haven’t been officially endorsed by all U.N. members is usually because there are territorial disputes.

Taiwan and its surrounding islands govern themselves as the “Republic of China” (ROC), whereas mainland China is referred to as the “People’s Republic of China” (PRC). In fact, until the 1970s, the Taiwanese ROC held China’s seat at the U.N. and was thus considered the legitimate government of China by the majority of the world’s countries. However, the 1971 UN General Assembly replaced the ROC with the PRC.

The political situation surrounding Taiwan is slippery, to say the least since mainland China insists that themselves and Taiwan are inseparable. As such, China is known to cut ties with any country that sets up diplomatic relations with Taiwan. Due to this pressure, the number of countries that “recognize” Taiwan is steadily decreasing every year. Some of the last countries to cut ties with Taiwan include Panama (2017), Dominican Republic (2018), Burkina Faso (2018), El Salvador (2018), Solomon Islands (2019), and Kiribati (2019).

Kosovo has also suffered revocations of recognition due to international pressure from Serbia and Russia. The self-proclaimed state of Kosovo declared its independence from Serbia in 2008. However, due to Serbia’s opposition, 15 states have withdrawn Kosovo’s recognition, including  Madagascar, Suriname, Burundi, and Papua New Guinea. Today, 98 out of 193 U.N. member states (51%) recognize Kosovo as a sovereign country.

Abkhazia and South Ossetia are disputed territories in the Caucasus, which split from Georgia in the aftermath of the Russo-Georgian War in 2008. The territories are recognized as independent states by Russia, Venezuela, Nicaragua, Nauru and Syria.

Northern Cyprus is only recognized by Turkey. The northern portion of the island was occupied by Turkey after a failed coup d’état in 1974, performed as an attempt to annex the island to Greece.

Western Sahara is a disputed territory claimed by both the Kingdom of Morocco and the Popular Front for the Liberation of the Saguia el Hamra and Rio de Oro (Polisario Front), which is an independence movement based in Algeria. Since the end of 2019, ten African states have opened diplomatic services in Western Sahara under their mission to Rabat. The Republic of Western Sahara is supported by a number of countries across the world, including Algeria, Mexico, Libya, Jamaica, Iran, and Guatemala.

If you add these countries to the UN members list, you end up with a total of 201 countries.

Besides these six partially recognized countries there are more “de facto states” — political entities that lack international recognition — that aren’t recognized by any U.N. member at all.

Transnistria is a thin strip of land wedged between Moldova and Ukraine, home to more than 500,000 people. The tiny sliver of disputed territory split from Moldova in 1992 after a brief military conflict, in which the separatists seem to have been aided by Russia. But not even Russia, which still has troops stationed in the region and regularly conducts military exercises there, recognizes Transnistria.

Officially known as the “Republic of Somaliland”, Somaliland is a self-declared country on the coast of the Gulf of Aden. Somaliland declared independence after the overthrow of Somali military dictator Siad Barre in 1991. Tens of thousands of people were killed in the fighting during the secession. Although Somaliland isn’t recognized by any other state in the world, it has working government institutions and even its own currency. Many also believe Somaliland is more stable and less prone to violence than the larger Somalia, which is a U.N. member.

Nagorno-Karabakh made headlines this year after the disputed territory reignited an old feud between Armenia and Azerbaijan. The landlocked region in the South Caucasus, which stretched over 4,400 square km (1,700 square miles), claimed independence from Azerbaijan in 1992, branding itself as the “Republic of Nagorno-Karabakh”. Since then, the former autonomous region has held several elections, as well as a 2006 referendum that approved a new constitution. However, it never received any international recognition. On September 27, Armenia and Azerbaijan engaged in armed conflict over this disputed territory, which quickly ended on November 9 with a cease-fire brokered by Russia. The devastated Armenia agreed to relinquish its control over Nagorno-Karabakh. Russian peacekeepers will guard the region for the next five years.

The Donetsk People’s Republic and Luhansk People’s Republic declared independence from Ukraine following an unofficial status referendum in May 2014. The two separatist movements resulted in armed conflict with Ukraine, which is still ongoing. Although no other country recognizes the two self-proclaimed states, Russia accepts identity documents, diplomas, and other certificates issued by the two governments.

The Republic of Cabinda is located in what is presently Angola’s Cabinda Province. The Front for the Liberation of the State of Cabinda-Exercito de Cabinda (FLEC) proclaimed independence from Angola in 1975. The unrecognized enclave state has since been running guerilla warfare with the Angola government in order to exert its autonomy.

If you were to also add these de facto states, there would be 207 nations in the world.

Additionally, there are more than 400 “micronations” — territories that claim to be independent or sovereign nations, often with a population ranging from a small village to a single household, but which haven’t been formally recognized by other states. These include the Principality of Seborga, which encompasses a small village on the border of France and Italy, founded in 1963 on the initiative of Giorgio Carbone, a flower farmer, who then became known as Prince Giorgio I.

Some micronations have been founded as social experiments, such as the Gay and Lesbian Kingdom of the Coral Sea Islands, which was self-proclaimed in 2004 in response to the Australian government’s failure to recognize same-sex marriages. Other micro-nations started as art projects, such as The Grand Duchy of the Lagoan Islands, founded in 2005 by a school teacher from Portsmouth and consisting of a pond and three tiny islands. The more recently formed Liberland was founded in 2015 as a libertarian paradise on an unclaimed parcel of land near the Croatian-Serbian border. The Free Republic of Liberland has a government of 10 members and an economy based on bitcoins and other cryptocurrencies.

The International Olympic Committee as National Olympic Committees claims 206 members, although there are only 195 U.N. recognized countries. That’s because the Olympics is less rigid in its definition of what constitutes a nation, and allows some dependent territories that are partially self-governed to take part in the games.

Similarly, FIFA — the foremost authority for football (soccer) and the organizer of the World Cup — recognizes 211 affiliated associations. That’s a bit more than the Olympic Games because, besides dependent territories, FIFA also includes Gibraltar, as well as England, Scotland, Wales, and Northern Ireland, which are allowed to compete as separate teams despite the fact they’re all part of the U.K.