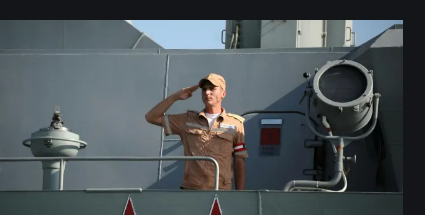 The recent deal between Russia and Sudan to establish a warship logistics hub for Russian forces on the Red Sea may provoke the ire of Washington, writes Mostafa Ahmady

Inter-state relations are either “cooperative,” aiming at sharing benefits and the exchange of interests for the betterment of peoples, or “conflictual,” meaning marred by disagreements and at some point escalation that may culminate in the use of military force to “preserve” a given country’s interests or “terminate” any dangers that may threaten its “very existence” or its people’s right to a safe and normal life.

For decades under the ousted Islamist regime of former president Omar Al-Bashir, Sudan has been highly polarised and succumbed to a bizarre blend of “Islamist ideologies” that used to govern the majority in Sudan and an “opportunism” based on which the country allied itself with “rogue” countries and with such people as Osama Bin Laden and Ramirez Sanchez, better known as Carlos the Jackal, who once were at the top of the internationally wanted terrorist list.

Providing a safe haven for terrorists and infamous acts of terrorism, the country also suffered under US sanctions after being placed on the US List of the State Sponsors of Terrorism for almost three decades.

While the demise of the Al-Bashir regime ushered in a new era in Sudan, this looks far from being settled. From the famous “Three No’s” of Khartoum (No to Israel, No to the recognition of Israel and No to negotiations), the country has turned to the “Three Yes’s” under intense pressure from the departing administration of US President Donald Trump. It has agreed to normalise ties with the “Zionist Entity,” the term which the Sudanese still use in reference to Israel.

The much-awaited American decision to remove Sudan’s name from the US List of State Sponsors of Terrorism has served as a “happy ending” for Sudan, as the country is now at last back on good terms with the world’s number one superpower, even if its transitional government had to pay a huge financial package in return. The deal may not have brought such good news to the other party of the agreement, namely the Trump-ruled US, however. Lurking behind it is the used-to-be competitor of the US and the seeker of restoring former glory – the “thick-furred” Russian bear.

The hybrid military-civilian government in Sudan has signed an agreement with Russia to establish a “warship logistics hub” at Sudan’s Red Sea city of Port Sudan. Sudan, with a 617-km-long coastline on the strategic Red Sea, is thus presenting itself as a “gateway” to Africa for key international powers. Khartoum wants to get into the limelight even if the cost of this is an “edgy” pact with Moscow.

The 33-page draft deal, published on the Russian government official portal, seems to intend to preserve now and in the future a hopefully privileged status for Russia on the Red Sea. The draft reveals that the hub will station up to four warships, including nuclear-powered ones, and will be home to some 300 personnel to service the warships of the Russian Navy.

The deal empowers Russia to “import and export weapons, ammunition and any equipment needed to operate the base and to carry out tasks by warships,” according to an analysis published by the Russian official news agency Itar Tass by defence affairs specialist Dmitry Litovkin. These activities will also be duty and inspection free. Above all, the new hub will accommodate “two large amphibious assault helicopter carriers” of the Russian Navy, a horse of another colour as far as a “logistics centre” is concerned. Plus, Sudan will provide the necessary port infrastructure and a sizable piece of land for the Russian hub.

The hub is the first naval base for Russia in Africa after the collapse of the former Soviet Union, particularly as the Russians failed to gain a foothold in Djibouti alongside their US and Chinese counterparts.

Historically speaking, the Soviet Union first maintained a heavy military presence in Africa in 1964 with the building of a huge naval base at the then Somali port of Berbera, nowadays affiliated with Somaliland and nicknamed “the Guardian of the Red Sea.” But it had to leave this base under pressure from Somalia’s then strongman Siad Barre in 1977, who was opposed to the Soviet alliance with the then communist regime in Ethiopia, the Derg.

Earlier this year, leaked reports suggested that Russia was in talks with the government in Somaliland for a “revival” of the former Soviet Union’s former base there. But Russia then denied the news, or it may have been denied approval for its request by the Somaliland authorities.

While Sudanese military circles have celebrated the pact as a sign of the country’s growing role in the region’s politics, Russia has also tried to assure Sudan’s neighbours that the deal is “defensive and not directed against other countries.” Though it is not yet clear what kind of “anti-sabotage efforts” Russia and Sudan would quell together, “defensive” connotes that the deal may go beyond the “technical” repair of warships or a resting point for Russian naval crews and in fact be some sort of alliance binding the two countries together.

Sudan, which heaved a sigh of relief after the US sanctions against the country were finally lifted, seems not to recognise that the deal will turn the country into another battleground for the Washington-Moscow “Cold War” conflict over areas of influence in the region. The hybrid government in Sudan has also apparently not considered next steps by the new US administration once president-elect Joe Biden gets access to the White House in January, as his administration may not be lenient should the agreement enter into force, particularly as the US has been historically alert whenever Russia is involved.

For decades, the people of Sudan have been in a bind due to the harsh US sanctions against the country as a result of the Al-Bashir regime’s hosting and training of terrorists who used Sudanese soil as a launching pad for acts of terrorism against their neighbours, including Egypt.

Under Al-Bashir, Sudan also used to put the blame on “conspiracy theories” for standing in the way of progress. The country did not heed the root cause of its problems, namely strategic errors that cost the people of Sudan dear at a time when its ruling elites were leading the kind of lavish lifestyles its people could only have heard about in fairytales.

In reality, those who continue to ignore the lessons of the past will not, in all probability, achieve their desired goals in the future.

The writer is a former press and information officer in Ethiopia and an expert on African affairs.