The government of the Republic of Somaliland went on national alert, Monday, against heavy rainfall expected in eastern regions during the next 48 hours or so as Cyclone Gati plows westwards from its landfall point in the Hafun area of Puntland, Somalia..

“Sea-plying communities and fishermen should avoid going out to sea during this period,” he said.

Faisal advised those that had already ventured out into the sea without knowing the dangers the tropical storm could inflict them to return to the safety of the shores as soon as possible.

The next forty-eight hours, he said, could be a deciding period.

The Somaliland coastal towns of Las Qoray, Mait and Heiss have already gotten a taste of what to expect in the next two or three days, according to area reports.

The alert follows a landfall of a tropical storm, named Gati, making landfall on the coastal shores of the Puntland State of Somalia at around 10:00 p.m., local time, on Sunday. While the brunt of the storm hit Hafun and adjacent areas, it is expected that winds and heavy spates of rain will spread far westwards to affect a number of coastal communities in the Republic of Somaliland to the west.

According to Puntland’s Karkaar Governor, Saeed Mohamed Fahiye, the bodies of eight Yemeni-born fishermen washed out to the shore. A number of people, inclduing the District Commissioner of Hafun town, were also injured as an unspecified number of houses and boats also sustained damages of varying degrees.

The Governor said communication with the affected areas had blacked out.

“The damages cannot be truly ascertained as communication with a number of key areas the storm hit cannot be reestablished yet,” he said.

Three more people were reported swept away by hard-hitting floods in the Dangorayo district. Warehouses and residential houses had also been badly flooded in the Haji Khayr town located along the Garowe-Qardho road. Volunteer rescue teams from Qradho and Garowe narrowly pulled out residents succeeding not to lose more people to the raging floods.

The storm formed early November 22 in the Arabian Sea, just east of Somalia, as the 3rd named storm of the 2020 North Indian Ocean cyclone season.

The storm had maximum sustained winds of 185 kph (115 mph), making it a Category 3 hurricane equivalent on the Saffir-Simpson Hurricane Wind Scale.

Gati has the potential to drop much more rainfall than the region experiences in an entire year — 100 mm (3.9 inches).

According to an FAO’s SWALIM storm update, heavy rains surpassing exceeding annual total amounts were reported in some areas including Bosasso (128mm), Balidhadin (103mm), Iskushuban (72mm) and Alula (72mm) in a single day. 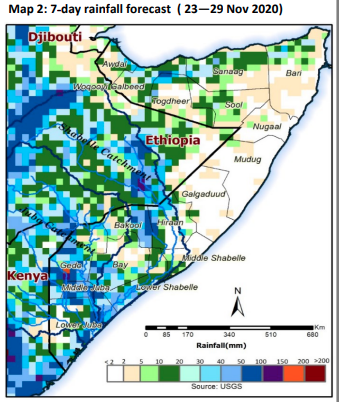