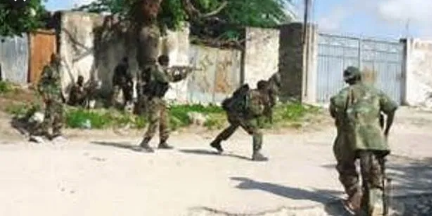 At least 10 day in an armed engagement between two Somalia army units fighting over cash-sharing at a transport checkpoint in the capital of federal Somalia, Mogadishu.

A number of others were hit by the exchange of fire. casualties included both civilians and members of the uniformed troops.

The checkpoint, reports state, is located at a place called Mariinaayada (The Marines) of Kaaraan district, Mogadishu.

The units, it is reported, fought when a unit commander other than on duty at the checkpoint at the time demanded a share of the illegal proceeds collected from transport passing through the checkpoint since neither was legally mandated to collect taxes.

Security personnel demand cash payments from transport going through checkpoints dotting throughput the city. It is even worse outisde the capital, motorists have often reported.

The confrontation cam under control only after elders hailing from the clans of the commanders of the two army units intervened.

The recurring armed confrontations inside the capital itself is an indication of how far down security has detriorated in Somalia. It is also an indictment on an army command that cannot even put its troops on leash mere kilometres away from the top desks – and within the confines of the capital – to boot.

Villa Somalia, despite the selfless efforts and financial support of the international community, has lost grip on the country following rash, thoughtless interferences it sbubjected to several member states and their leadership.

Both Jubaland and Hirshabelle are on the verge of experiencing all-out civil strife and clan confrontations stirred by Villa Somalia heayhandedness.

Puntland has made known its displeasure of Mogadishu in more ways than one.

The Speaker of the Lower House of Parliament, Mohamed Mursal, is currently touring Baidoa in a bid to convince the Soutwest state eladers not to cooperate with reneging states although it has, too, the same concerns over the leadership of President Farmajo.