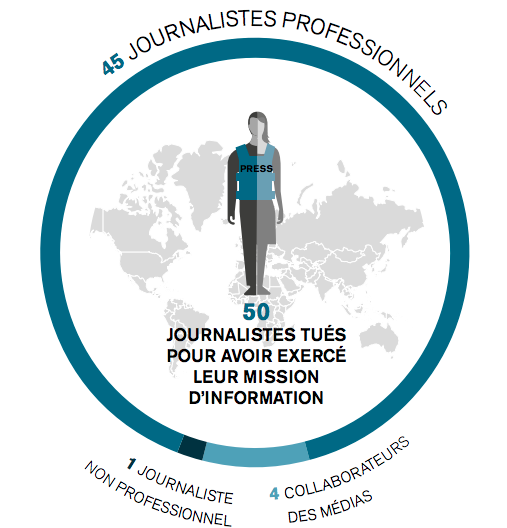 Reporters Without Borders (RSF) publishes the second part of its annual report on abuses committed against journalists around the world. In 2020, 50 journalists were killed. While the number of journalists killed in war fields continues to decline, more and more are being murdered in peaceful countries. 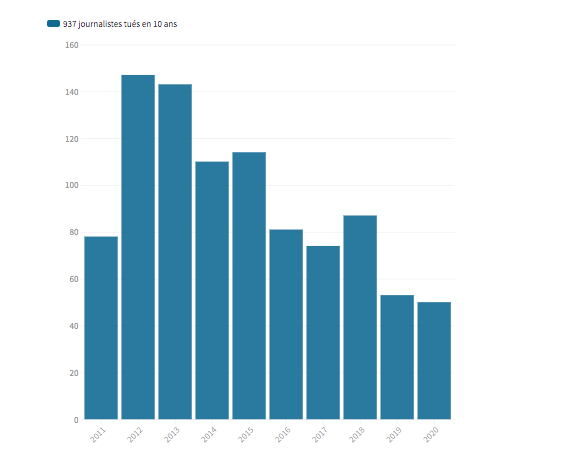 RSF has identified 50 journalists killed in the course of their profession – between January 1 and December 15, 2020. This figure remains stable compared to the previous year (53 killed in 2019) despite the reduction in reporting due to the epidemic of Covid-19. In addition, a growing number of journalists are being killed in so-called “peaceful” countries. In 2016, 58% were killed in conflict zones. Today, the proportion of journalists killed in areas torn by war (Syria, Yemen) or undermined by low or medium intensity conflicts (Afghanistan, Iraq) stands at 32%. In other words, 68% (more than two thirds) of journalists killed are in peaceful countries, notably in Mexico (8 killed), India (4), Pakistan (4), the Philippines (3) and Honduras. (3).

Of all the journalists killed in 2020, 84% were knowingly targeted and deliberately eliminated, compared to 63% in 2019. Some were killed under particularly barbaric conditions.

In Mexico, the journalist of the daily El Mundo Julio Valdivia Rodríguez, was found beheaded in the state of Veracruz, his colleague Víctor Fernando Álvarez Chávez, editor-in-chief of the local news site Punto x Punto Noticias, was cut into pieces in the city of Acapulco. In India, journalist for the daily Rashtriya Swaroop, Rakesh Singh “Nirbhik” was burned alive after being sprayed with highly flammable hydro-alcoholic gel, while journalist, Isravel Moses, correspondent for a Tamil Nadu television station , was killed with machetes.

In Iran, it is the state that has been tortured: the administrator of the Telegram Amadnews channel, Rouhollah Zam, sentenced to death after an unfair trial, was executed by hanging. Even in this country which still practices capital punishment, no journalist had been the victim of this archaic and barbaric punishment for 30 years.

“The violence of the world continues to befall journalists, deplores the secretary general of RSF, Christophe Deloire. A part of the public considers that journalists are victims of the risks of the profession, even though they are increasingly attacked when they investigate or report on sensitive subjects. What is weakened is the right to information, which is a right for all human beings. ”

The most dangerous subjects to cover traditionally remain the investigations into cases of local corruption and embezzlement of public funds (10 killed in 2020) or on the mafia and organized crime (4 killed). New in 2020: 7 journalists were killed while covering protests. In Iraq, it is always the same modus operandi: 3 journalists were shot in the head by unidentified armed men during the rallies, a fourth died in Kurdistan while trying to escape the clashes between the forces order and demonstrators. In Nigeria, two journalists were also victims of the climate of violence in which protest movements are taking place, which denounce in particular the brutality of a police unit responsible for the fight against crime. In Colombia, 1 journalist from a community media was shot and killed while covering a demonstration by indigenous communities protesting against the privatization of land in their area. In this case, too, the rally was violently dispersed by police, army and riot control.

In its 2020 Annual Report on Detained, Hostage and Disappeared Journalists, published on December 14, RSF listed 387 journalists imprisoned for exercising their information profession, a historically high number of detained journalists. The year 2020 was also characterized by a 35% increase in the number of women arbitrarily detained and a fourfold increase in the number of arrests at the start of the spread of the virus across the world. Likewise, 14 journalists, arrested in connection with their coverage of the Covid-19 epidemic, are still behind bars to this day.