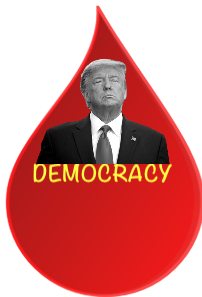 From the beginning, the essence of the Trump foreign policy has been disruption of arrangements and policies that largely served the United States well for three-quarters of a century—something I argued last year in a Foreign Affairs essay titled “Present at the Disruption.” President Donald Trump’s abrupt withdrawal from long-standing agreements and organizations, his attacks on allies, his embrace of authoritarian rulers and disregard of human rights violations, his habit of announcing policy changes on Twitter with little or no consultation: all of this, I explained, would result in a marked decline in U.S. influence, to the benefit of China, Iran, and Russia and the detriment of global efforts to address climate change, infectious disease, nuclear proliferation, and cyberthreats.

But the damage wrought by the events in Washington on January 6—the lawlessness and violence at the U.S. Capitol and the refusal, by Trump and dozens of Republican members of Congress, to accept the results of the November presidential election—will be even greater, on U.S. foreign policy as well as on U.S. democracy. We have gone from “present at the disruption” to “present at the destruction.” What took place last week was a distinctly American failure, but the consequences go far beyond American shores. A post-American world, one no longer defined by U.S. primacy, is coming sooner than generally expected—less because of the inevitable rise of others than because of what the United States has done to itself.

THE WHOLE WORLD IS WATCHING

The world has long paid close attention to events in the United States: the civil rights movement and Vietnam War protests in the 1950s and 1960s, Watergate, the 2008 financial crisis—and, over the past four years, Charlottesville, the killing of George Floyd, and U.S. failures in confronting the COVID-19 pandemic. But the siege and occupation of the Capitol on January 6 were something distinct: the president of the United States, along with many supporters and enablers in Congress and around the country, inciting or carrying out violence with the aim of subverting American democracy. (There was also a failure of law enforcement, reinforcing questions about basic American competence raised by the flawed response to COVID-19 and an undetected cyberattack by Russia.)

The images reinforced the sense among fellow democracies that something is seriously wrong in and with the United States. How was it, they asked, that so many Americans could vote for a leader who had, even before last week, attacked independent judicial and media institutions, refused to set a strong example in the face of a highly lethal pandemic, and violated many of his country’s oldest political norms? Their fear is that even after Trump leaves the Oval Office, he will remain on the political scene, influencing American politics and dominating the Republican Party for some time to come; the restoration of more traditional American behavior under Joe Biden and Kamala Harris could, from the vantage of most U.S. allies, prove only a limited and temporary respite.

The images reinforced the sense among fellow democracies that something is seriously wrong in and with the United States. How was it, they asked, that so many Americans could vote for a leader who had, even before last week, attacked independent judicial and media institutions, refused to set a strong example in the face of a highly lethal pandemic, and violated many of his country’s oldest political norms? Their fear is that even after Trump leaves the Oval Office, he will remain on the political scene, influencing American politics and dominating the Republican Party for some time to come; the restoration of more traditional American behavior under Joe Biden and Kamala Harris could, from the vantage of most U.S. allies, prove only a limited and temporary respite.

As a result, allies have little choice but to question their decision to entrust their security to the United States. There were already doubts on this front, as a result of some actions during the Obama administration and even more under Trump (attacking allies, cozying up to dictators, acting unilaterally and unpredictably). Such doubts mean a greater tendency by other countries to ignore U.S. entreaties and to take policy matters into their own hands, be it by assuaging powerful neighbors or by building up (and using) their own military strength. Signs of this are already evident in the Middle East, Europe, and Asia: the Saudi war in Yemen, Turkey’s involvement in Syria and support for Azerbaijan in Nagorno-Karabakh, the European Union’s investment treaty with China, the Regional Comprehensive Economic Partnership trade bloc in Asia. The result will be a world that is more violent and less open politically and economically, and in which the United States retains significant but no longer dominant influence or power.

The violence at the Capitol will in particular weaken the United States’ ability to advocate for democracy and the rule of law: imagine the shouts of hypocrisy the next time Washington lectures or sanctions another government for its behavior. Authoritarian regimes such as China’s are already gloating, arguing that the scenes last week prove both the superiority of their model and the hypocrisy of U.S. officials when they criticize the crackdown in Hong Kong or repression in Xinjiang. Similarly, arguments against the spread of nuclear weapons on the grounds that other countries are not sufficiently stable or responsible ring hollow when the commander in chief of the world’s preeminent nuclear power appears to lack those attributes.

As with individuals, the reputations of countries are easier to tear down than to build. Yet it is necessary to do everything possible to undo the damage, for the sake of both the United States and the rest of the world. Even in a post-American world, U.S. power and influence remain substantial, and the odds of building a stable, open, and effective international order are close to nonexistent without a major U.S. contribution.

Some self-awareness is called for. The United States is not nearly as unique as many Americans believe, including when it comes to the threat of democratic backsliding. What has happened should put an end to the notion of American exceptionalism, of an eternal shining city on a hill.

The incoming Biden administration would be wise to put on hold announced plans to convene a meeting of the world’s democracies until the United States’ own house is in better order. That will require taking some straightforward immediate steps, such as launching a body like the 9/11 Commission to investigate how the Capitol was left so vulnerable to so well known a threat and put forward recommendations for fixing security shortfalls, including those stemming from the patchwork governance of the nation’s capital. It is also essential to bring to justice as many people involved in unlawful acts as possible, both to make clear that such behavior has consequences and to signal to the world that such a breakdown in law and order will not be allowed to become a permanent condition.

But much of what is necessary demands longer-term effort. The country must address inequality, which has grown substantially worse in the pandemic-induced recession, in both income and access to education and other opportunities; such conditions give rise to understandable frustration and fuel populism and radicalism, of left and right. One particular challenge is the direction of the Republican Party. American democracy cannot work if one of its major parties rejects the notion of loyal opposition and defines itself not in terms of what it can do but only in terms of what it can prevent.

Some procedural changes—open primaries, ranked choice voting, steps to make it easier to vote whether in person or by mail—can help. So would reduced gerrymandering, either through judicial action or through the work of bipartisan commissions to redraw congressional districts. At the end of the day, however, it will be up to voters. They will have to decide whether those who enabled Trump are worthy of their support going forward. Republicans have to decide whether their party is to be more conservative than radical (and if a majority opts for the latter, conservatives will have to decide whether to bolt and form a new party). How the Democrats wield their current control of the executive branch and both chambers of Congress—whether they are seen to govern from the center or the left—will also have a significant effect.

Changing American political culture demands an ambitious and wide-ranging agenda. It requires countering the pernicious elements of social media, which has the tendency to drive people to voices and information that conform to their own views. It calls for reinvesting in civic education—democracy’s DNA is not automatically transmitted from generation to generation. And it requires revisiting the notion of national service. The United States is increasingly a country of multiple nations, divided by geography, race, experience, education—and political leanings. National service does not mean just military service, nor does it have to be mandatory. But if America’s differences are not to be the country’s undoing, more young Americans must meet and work together with those of other classes, colors, religions, and backgrounds.

Ultimately, many of the most important changes cannot be mandated or legislated. What is at issue is character. The United States may consider itself a nation of laws, but laws can prescribe or proscribe only so much. Norms are the essential underpinning of a democracy, encouraging those with power to do what is right rather than simply refraining from doing what is illegal. Donald Trump has been a serial violator of norms. Congress may be able to address some of his most egregious practices through changes in law, and the Biden White House can help by working with Congress to roll back some presidential prerogatives. But in the end what will matter most is how the nation’s leaders and citizens conduct themselves.

A DAY THAT WILL LIVE IN INFAMY

January 6 is a day that will—and should—live in infamy. We can hope that it will provide a useful shock to the body politic. But crises don’t always trigger needed change. Seeing that this one does must be a national priority.

History is useful here. It was the shock of the Great Depression that spurred the New Deal, and of Pearl Harbor that ended American isolationism. If January 6 leads to collective soul-searching and internal reform, the United States can begin to regain the soft and hard power it will need to help manage great-power rivalry and contend with global challenges; as always, foreign policy begins at home. A post-American world will not be dominated by the United States, but that does not mean it has to be led by China or defined by chaos.