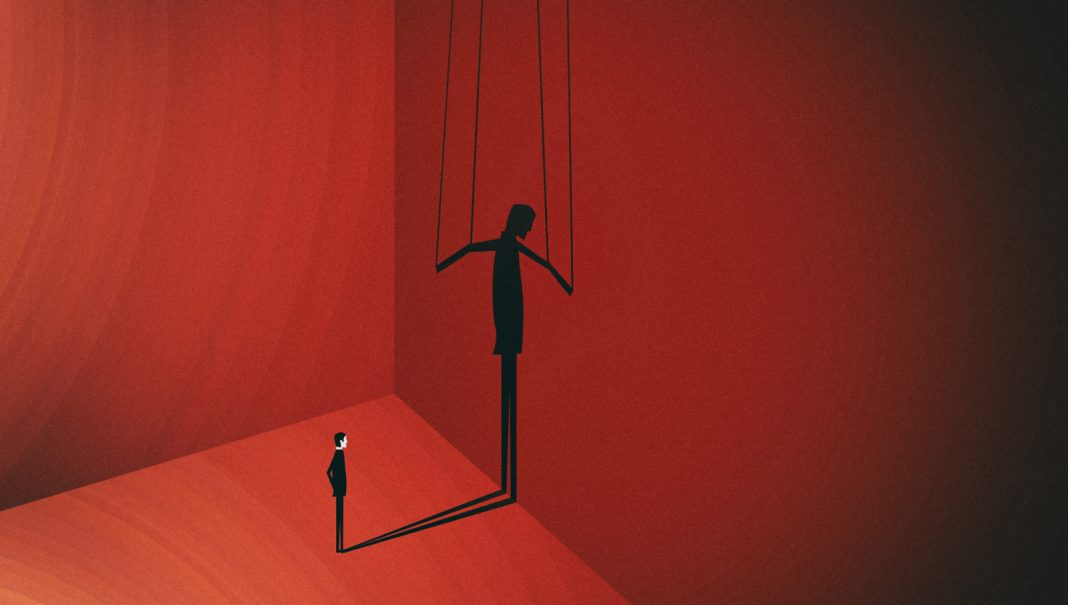 As Joe Biden is inaugurated this week, and as the world celebrates the defeat of Donald Trump, one of the Biggest Men of anti-democratic populism, it cannot afford to gloss over the determinants of the crisis that led to Trump gaining 75 million votes and the extremist assault on the Capitol.

In truth, winning the US presidential election and then the Senate ultimately depended on a tactical decision of grassroots activists to concentrate on mobilising disaffected would-be non-voters to vote out Trump. If Biden’s presidency is to mark a new beginning for democracy it needs to start with introspection and a new path away from an unregulated system of economy and state-surrender to the markets that has deepened misery for billions and imperilled our planet.

If we don’t grasp this nettle now an even bleaker future lies ahead.

To encourage us it’s worth recalling how, in 1989, lifelong communist Joe Slovo put on his big-girl underpants and wrote a reflection on socialism that required a deep and difficult introspection. The article, Has Socialism Failed?, was published in 1990. Five years later, just before his death on 6 January 1995, he told journalist Philip van Niekerk: “I was wrong and I am ashamed of some of the traps I was led into.”

In the context of Slovo’s ruminations, there was still an “iron curtain” across the world but the so-called socialist states faced an economic crisis and a revolt that could no longer be denied, denounced as counter-revolutionary or parried away with excuses.

In the late 1970s, strikes that shook the Lenin shipyards in Gdańsk in Poland, led by an independent trade union movement, Solidarity, and future Polish leader Lech Wałęsa had led to workers winning the right to strike. That propelled a great unravelling that culminated in the collapse of the USSR – much as the legalisation of black trade unions after the 1973 Durban strikes and the Wiehahn Commission contributed to apartheid’s demise.

For decades, Slovo and the SACP had tried to maintain that this was a counter-revolutionary movement, but events ripped the mask off this lie.

In China, the Communist Party massacred students on Tiananmen Square. In Berlin, citizens pulled down the wall. Across Eastern Europe and the Soviet Union there were rebellions. The mood of the time, and the crisis of belief it caused among socialists, are well captured in a poem by Linton Kwesi Johnson, Mi Revalueshanary fren, which after recounting the collapse of various East European dictatorships presciently foretold that apartheid too “will ‘av to go”.

But in the capitals of the West the collapse of undemocratic socialism (Stalinism) was read as the triumph of its opposite, free-market capitalism. It was a victory that added rocket fuel to the likes of British Prime Minister Margaret Thatcher and US President Ronald Reagan who, infected with the ideas of neoliberal capitalism developed by economists such as Milton Friedman and the Chicago school, already considered themselves on a historic mission to usher in a new era of capitalism.

In the great contest between isms, it seemed as if the one based on private ownership and the diktat of the market had won. Most famously, Francis Fukuyama declared it “the end of history”.

Since the collapse of the Soviet Union capitalism has been without a rival competitor. It has had a 30-year free ride and chance to prove itself to its discontents. Yet economic and social crisis is once more the order of the day. Britain is in its worst recession yet. The US has become a showcase for inequality and the anger that marginalisation based on race and/or class breeds. Europe is flailing.

Aided and abetted by Covid-19, there is rebellion and disintegration across the world.

Bringing it home, even before Covid-19 South Africa’s economy was at an impasse – distorted, unequal, unable to create jobs, exclusionary. In the early 1990s, remember how billboards proclaimed “Free enterprise is Working!”

It’s hard to believe that now.

South Africa prides itself on robust dialogue. After all, what would have happened if bogeymen like Slovo and comrades, seeing the writing on the wall, hadn’t opened their doors to discussion with big business? And yet in South Africa we look in vain for a business leader of stature or an advocate of free-market capitalism with the gravitas of Slovo to now look their own deep-held convictions in the eye and start a genuine debate by asking: Has capitalism failed?

All things being equal, it would have required someone like Friedman – “the twentieth century’s most prominent advocate of free markets” – to ask this question. But since he is no longer with us it ought to be undertaken by one of his disciples. Next week the great and bad will gather in Davos again, but while the agenda will contain much hand wringing about the crisis of inequality, it’s unlikely that any leaders from business will question the rogue operating system, or suggest measures needed to align economic outcomes with values of dignity and human rights.

In the context of the Covid-19 pandemic, although we seem to avoid the C-word, only flat-earthers (there are many) should dispute that the capitalist economic system, and the governments that depend on it for taxes, employment creation and innovation, are in crisis.

Our economies are in tatters and there is little certainty about how, when and even if we will exit this crisis. However, much as Covid-19 has exacerbated this crisis and laid bare class inequalities that have been widening over the past 30 years, it was a tinderbox before a virus came along to light the fuse.

As historian Adam Tooze points out, quoting Larry Summers, at the heart of the world economy is a “balance of financial terror”.

In South Africa, the evidence is before us in the unemployed men and women on every street corner. Despite hollow promises about economic recovery plans there is no reason to believe that anyone in business or government has fathomed a way out. Instead, politicians continue to repeat discredited mantras about debt and the “bloated public service” – digging us deeper into our holes.

I am raising these issues not for purposes of agitation, but because these questions need to move to centre stage and because economic accountability is as important as political accountability. It’s de rigueur to focus on the corruption of the political elites, but when is the same favour going to be extended to the economic elites?

If you want an empirical analysis of the state of human civilisation aka 2021, the July 2020 final report of Philip Alston, reflecting on his tenure as United Nations Special Rapporteur on Extreme Poverty and Human Rights, is a good place to find shocking facts to digest:

What does this portend for the future?

Alston warns that “low tax revenue has hobbled the capacity of governments to undertake redistributive policies”. We offer a fine exemplar of that as we end Covid-19 relief grants.

Much is made about the Sustainable Development Goals to which the world subscribed in 2000, but Alston calculates that “using historic growth rates and excluding any negative effects of climate change (an impossible scenario), it would take 100 years to eradicate poverty under the Bank’s line and 200 years under a $5-a-day line (Agenda 2230!). This would also require a 15- or 173-fold increase in global GDP respectively.”

And in a county that pays much lip service to gender equality, consider this: “At the current rate of economic growth, closing the gender gap in economic opportunity is expected to take 257 years.”

Then ask yourself: Does capitalism have a plan for urgently mitigating the escalating climate crisis?

Is there a pathway to tackling inequality? Based on what we have seen so far of unequal vaccine distribution, can Covid-19 and as yet unnamed viral pandemics be prepared for if left to privately owned pharmaceutical companies alone? In the hands of companies like AstraZeneca private profit and public good are surely a conflict of interest (read here)?

Once upon a time one of capitalism’s greatest claims to legitimacy, particularly when contrasted with the Stalinist states, was that it fostered democracy, or at least that it did so in the most developed countries.

However, in the past 20 years it has become apparent that many of the governments that have most actively advanced the agenda of neoliberalism can only survive by hobbling democracy. Surely, this is the meaning of enlisting tech to subvert informed decision making: Watch the films, The Social Dilemma and Influence; remember the Cambridge Analytica scandal, the role of Bell Pottinger in our own democracy, Putin’s intervention in the 2016 US elections and probably Brexit as well. These are not aberrations, they are systems for troubleshooting when the operating system is under threat.

Inequality or social justice? The choice is yours

On the Southern tip of the African continent we are a bit player in these planetary questions. Yet they have direct bearing on the lives of our 60 million people.

Among other things, 2021 is the 25th anniversary of the signing of our Constitution. If that is to mean anything then we are ordered to see “extreme poverty as a violation of human rights”.

It is at this moment of global crisis (as it was after the great conflagration of World War 2) that rights matter most, that we need an equitable tax system and programmes that fulfil the human rights of all people and work to eliminate extreme poverty.

The experiments of Thatcher, Milton and Reagan, carried through wittingly or unwittingly by a generation of presidents and prime ministers, need to be certified cruel and inhumane. As an antidote, significant redistribution is indispensable. Protestations of “inadequate resources” to tackle this crisis are entirely unconvincing given our determined refusal to adopt just fiscal policies, regulate excessive pricing and abuses of market dominance in the food and health sectors, end tax evasion and stop corruption.

Alston argues: “Poverty is a political choice and will be with us until its elimination is reconceived as a matter of social justice.” But in South Africa we are forbidden that choice by our highest law, the Constitution, whose Preamble and Bill of Rights binds us to:

The argument of this editorial, therefore, is not that we replace right-wing populism with left-wing populism, but that in a global environment that has received a temporary lease of life by the democratic defeat of Trump, we all look to our constitutional obligations and ask ourselves the same hard questions that Slovo, Mandela and others were prepared to ask to try to get our country out of a cul-de-sac in the early 1990s. Only by asking the questions will we uncover the answers.