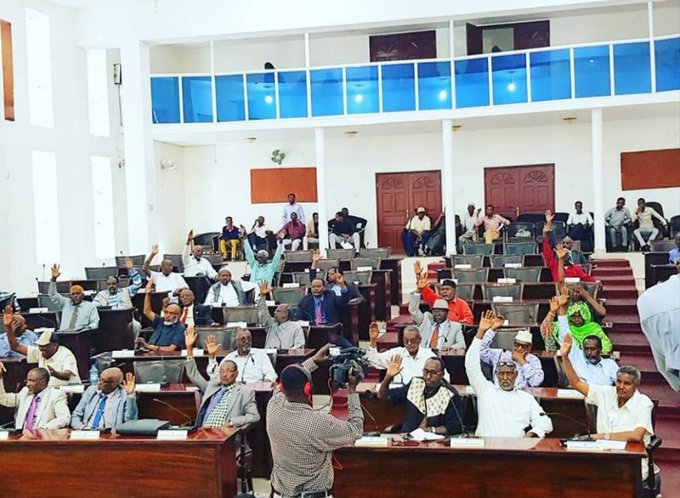 The Lower House of the Republic of Somaliland’s bicameral parliament passed the Petroleum Policy and Upstream Petroleum Bill into law Wednesday.

The approval is mainly due to the end-to-end public relations campaigns the ministry has, together with explorers, undertaken to prepare residents of potentially prospective areas to benefit from the perk side of exploration.

The bill will pass into law once the President signs it.

The Director-General of the Ministry of Energy and Mineral Resource, Mukhtar M Ali and the Director of the Petroleum Directorate, both profusely expressed the ministry’s reaction to the passing of the Bill, lauding the Representatives for turning a long-awaited hope into reality.

The Bill had been inching its way to this stage since 2013 when the then Minister of Energy and Minerals, Hussein Abdi Dualeh, first presented it to the Council of Ministers, followed by a submission to the Representatives which mulled over it for quite a period of time despite the hope of the government that the Bill would earn the MPs’ approval by end of 2015.

Attempts to pass it would succeed one another throughout succeeding years until this final thumbs-up vote was secured on January 19.

The Upstream Bill has been revised and translated into Somali since then.

The bill was accompanied in tandem with a petroleum revenue policy which details how contracts will be awarded, acreage allocated, and production and revenue are to be shared.

According to various ministerial affidavits and statements explaining the status of the country’s progress towards a regulated exploration and production timeline, the absence of diplomatic recognition of Somaliland’s reaffirmed sovereignty has proven a formidable challenge to international companies and interested parties.

‘It has been challenging for Somaliland to attract oil companies except for a few that have the risk tolerance for operating in such an environment and have experience in operating in similar challenging areas,” the ministry said at the time.

The imposed political encumbrance inhibited the economic development of the country blocking any meaningful production climate to blossom. Largely due to this,  the government abandoned the bid round process for licensing blocks in favour of an open-door policy to solicit and negotiate one-on-one with each oil company.

In August 2012, Genel, for instance, was awarded an exploration licence for onshore blocks SL-10-B and SL-13 in Somaliland, covering an acreage of 40,300 km2 with a 75% working interest in both.

The company has since then declared that SL-10-B/13 blocks were highly prospective. Conservative estimates had been putting oil reserves in the area to above 2bln barrels.

With the approval of the Bill, and the intensifying international pressure which calls for the recognition of the Republic of Somaliland, the country’s prospects for accelerated economic and political gains loom enormously on the near horizon.

In an open letter to the President-elect of the United States, Joe Biden, Ambassador Stephen Shwartz, called both the US and the AU to reshuffle cards and start acknowledging the thirty-year successful reality of Somaliland and, especially, in juxtaposition to the uncertainty, anarchy and aid grave that characterizes federal Somalia.

“Somaliland’s status must be determined, which could allow for more cooperation and better management of disputed boundary issues,” he said.

He added that the United States needed to assert its presence in the region so not to leave other powers such as China an unhindered, fair-weather sail into the geo-strategically important Horn of Africa country and the region in general.

“Recognizing the region’s importance, China built its first overseas military base in neighbouring Djibouti, where the United States, France, Japan, and others have military facilities. The UAE, Turkey, and Russia have or have signed agreements to establish bases nearby in the Red Sea. With mounting global attention on the greater Bab el-Mandeb, the United States has broader strategic interests in reinforcing its position in the region rather than retreating from it,” Shwartz said.

The diplomat advised that the US can start a change of the status quo by opening a consulate in the Somaliland capital of Hargeisa, following proactive decisions other countries such as the UK, Djibouti, Turkey, Taiwan, Kenya and Ethiopia have already taken.

“The United States should establish a consulate in to assist U.S. citizens and businesses and to build relationships. It also should work with the African Union and others to resolve Somaliland’s status by persuading Somalia’s next president to undertake immediate and serious negotiations.” Schwartz stated.