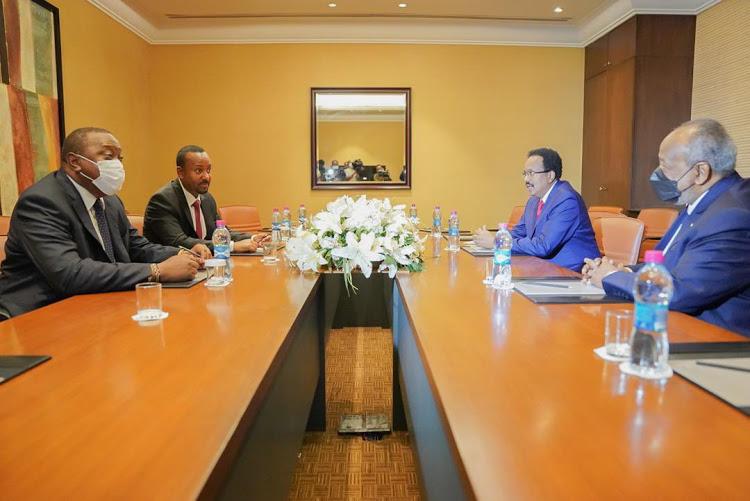 A team appointed to investigate claims by Somalia that Kenya is interfering with its internal affairs and arming militia to destabilise the neighbouring country says there is no evidence to confirm that.

The claims had caused a diplomatic spat between Kenya and Somalia prompting a recall of diplomats.

“The commission considers that these grievances, some of which are longstanding, do not appear to it to be sufficient to justify a diplomatic separation between Kenya and Somalia. It is true that the federal government of Somalia is sovereign in its decisions,” says part of a report by the team.

“However, on closer examination, it cannot help but be considered disproportionate and unproductive because the two countries are intimately linked politically, humanely and economically.”

It added the consequences of the diplomatic standoff on the 3,000 Somali children attending Kenyan schools on the other side of the border, the hindrance to the functioning of Amisom which has since been experiencing difficulties in relief operations among Kenyan troops and the economic impact of the embargo on khat in the agricultural region of Meru are a perfect illustration of this.

It recommended that more diplomatic efforts be deployed at the highest level in order to reconcile the two sisterly countries of Kenya and Somalia.

This follows a directive by the 38th IGAD Summit held in Djibouti on December 20, 2020, during which the regional Heads of State and Government meeting discussed the diplomatic crisis that has affected the relationship between Kenya and Somalia.

Somalia had broken off diplomatic relations with Kenya on December 15, 2020, after having earlier recalled its ambassador and sent the Kenyan representative back to his country for consultations with his authorities on November 30, 2020.

During the discussions, the President of Somalia Abdillahi Farmajo, made any resumption of diplomatic relations with Kenya conditional on the withdrawal of the armed forces that Kenya has gathered at the border and the end of the armed militia hostile to his government that he maintains on its soil.

A commission made up of diplomats and military officers and an IGAD representative was later sent to Kenya and Somalia in January with a mission to collect facts and data justifying the respective positions of the two countries.

Somalia claimed there is a violation of the airspace of Somalia, violation of Somalia’s land borders and that Kenyan forces, led by Amisom, leave their positions and move on to other locations and recognition and collaboration with the Jubaland Regional State.

“The Kenyan authorities have recognised Ahmed Madobe as President of Jubaland after elections that were not validated by the central government,” says the report.

It added there was participation in the illegal sugar and coal trade in Kismayo to the enrichment of al Shabaab and creation, training and maintenance on Kenyan soil of an armed group under the authority of Abdirashid Janan in Omar Jilo, 30 km from Mandera, inside Kenyan territory.

At the end of the meeting with the high-level working group, the commission held another meeting with ambassadors and senior officers of the Kenyan forces to inquire about the situation at the northern border of the country.

During these overflights, members of the commission were able to observe Somali military troops massed on the border.

The commission was unable to identify an additional camp populated by Somali militias in the overlooked area under control.

The team said that there is sufficient evidence that Kenyan aircraft entered the Somali territory in disregard of the provisions of the Convention on Civil Aviation signed in Chicago on 7 December 1944.

“In disagreement with the local authorities in Jubaland, the federal government had instructed all aircraft to land in Mogadishu. Kenyan planes braved the ban to defeat a total air embargo that provides no exemptions for any reason, including humanitarian evacuations.”

“On the charges brought against the Kenyan troops under the authority of Amisom, the commission considers unjustified this ostracism against the military forces acting on behalf of Amisom They fall under the responsibility of the African Union on whose behalf they act in the same way as its other troops of various nationalities,” reads the report.

On the recognition and collaboration with the regional state of Jubaland, the commission said it has no evidence of such recognition.

“The participation of two influential Kenyan political figures, MPs Aden Duale and Yusuf Hadji in the enthronement ceremony of the president of Jubaland does not constitute a recognition. However, no one can contest the proximity of the Kenyan government to the regional authorities to preserve security on their soil in a region infested by terrorists.”

It added Kenya has made great human sacrifices to free this region from the Al-Shabaab militia in order to protect itself from the many attacks that have been perpetrated on its soil.

On the trade of charcoal and sugar in Kismayo, the commission welcomed the diligence with which the issue has been addressed.

Indeed, by Resolution 2551 of 12 November 2020, the Security Council banned these types of trade and Amisom, as well as the federal government of Somalia, welcomed the good result.

“This fight has dried up the accounts of the shebabs who have fallen back on the imposition of taxes on the country’s traders,” it adds.

“It should be recalled that during the London meeting of May 17, 2017, a Somali security architecture was adopted which maintains the armies of the regions in addition to the regional police. This army has in the past scored notable victories against al Shabaab alongside American forces and Amisom.”