The federal government of Somalia, through its ministry of information, released, Wednesday, a blanket decree prohibiting close association of people which will be forcibly implemented by law officers if ignored.

The government said the measures were to prevent a further spread of a reported resurgence of COVID-19 in Somalia.

The statement added that the FGS ministry of Health had red-flagged the situation stating that the pandemic has not only re-emerged but that it was spreading at an alarming rate among the society.

The government, it said, has taken into consideration the ‘insistent calls of a variety of segments of the society such as religious clerics, the business community, education sector, academia, intellectuals, women and youth and in consultation with the President of the Federal Government of Somalia, Mohamed Abdullahi Farmaajo’.

To effectively enforce a supposed social distancing, the government put all civil servants on leave except for ‘core personnel’ who are ordered to use facemasks.

All kinds of associations and social gatherings are prohibited.

Mosques and other equally obligatory crowd-pullers are asked to observe social distancing of one to two metres.

The government, although it cited the business community and education sectors as one of those whose calls it heeded, conspicuously skipped imposing any specific measures on learning centres (schools, universities, colleges, etc.) and public transporters, leaving it to ‘specific measures will be applied’.

Neither did the other segments cited concur the government stamp on calls they made for intervention with some calling it as cosmetic, unfounded excuses for the government’s order.

The government decree is largely seen as a measure to block demonstrations which the Somalia government opposition, led by the council of presidential candidates union, on Friday.

The opposition, particularly, reads it as a government panic button.

In response to the statement and the radical measures the government introduced at this late hour, the union defied the orders stating that no matter what the planned demonstrations will occur.

Hassan Sheikh Mohamoud, a former president of Somalia, and a leading member of the Union stated that the shallow intentions of the government escaped no one.

“We are not used to the government superseding public welfare to its machinations. The planned, public demonstrated is on and cannot be stopped. We will be there leading it. None will heed the government call,” he said.

The mandated term of the Villa Somalia administration ended on February 8 on a stringent note without the various political actors reaching a consensus on an electoral process to replace parliamentary members and the President.

A 14-member technical committee made up of delegates from the government and the federal member states announced Tuesday that it has come up with a possible solution to the impassé. Its proposal will become effective if the President and the other presidents under his rule agree to it, with the former signing it into an executive implementation.

It needs to be seen how the committee circumvented contentious issues which included selection of Somaliland MPs in Mogadishu. Since these MPs were understood to represent no one but themselves, whoever pulled the purse strings would own their votes which usually happened to be whoever was the President at Villa Somalia.

Another issue was that of Gedo whose 16 MPs the government wanted. To effect this, the federal government, contrary to the 17 September 2020 agreement between the FGS and the FMS, wanted to directly control Garbaharrey of Gedo where it should have fallen under the Jubaland state jurisdiction.

Garbaharrey is the President’s hometown which exposed the clannish xenophobia which could not be concealed by no amount of Villa Somalia protestations and rationale. 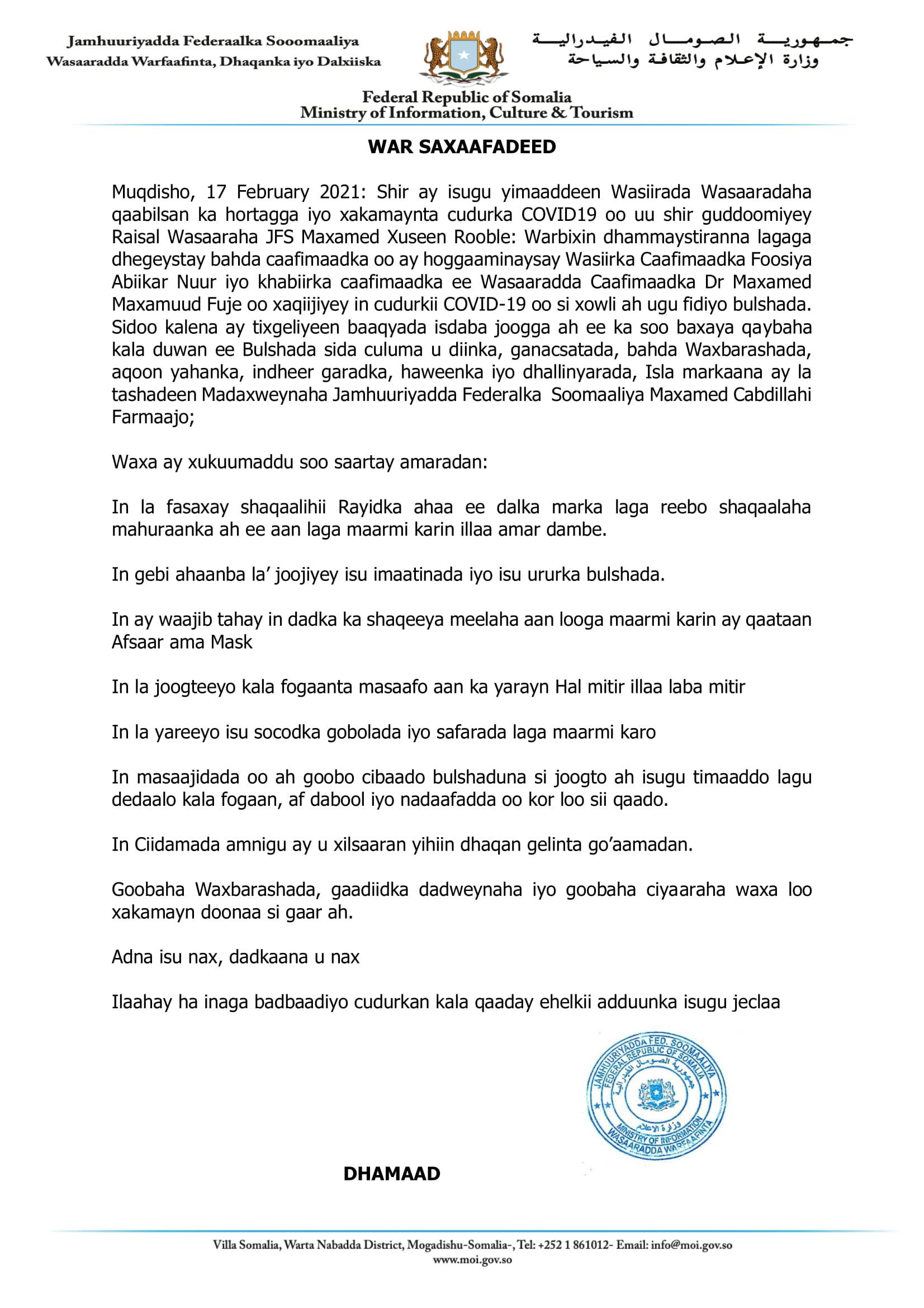