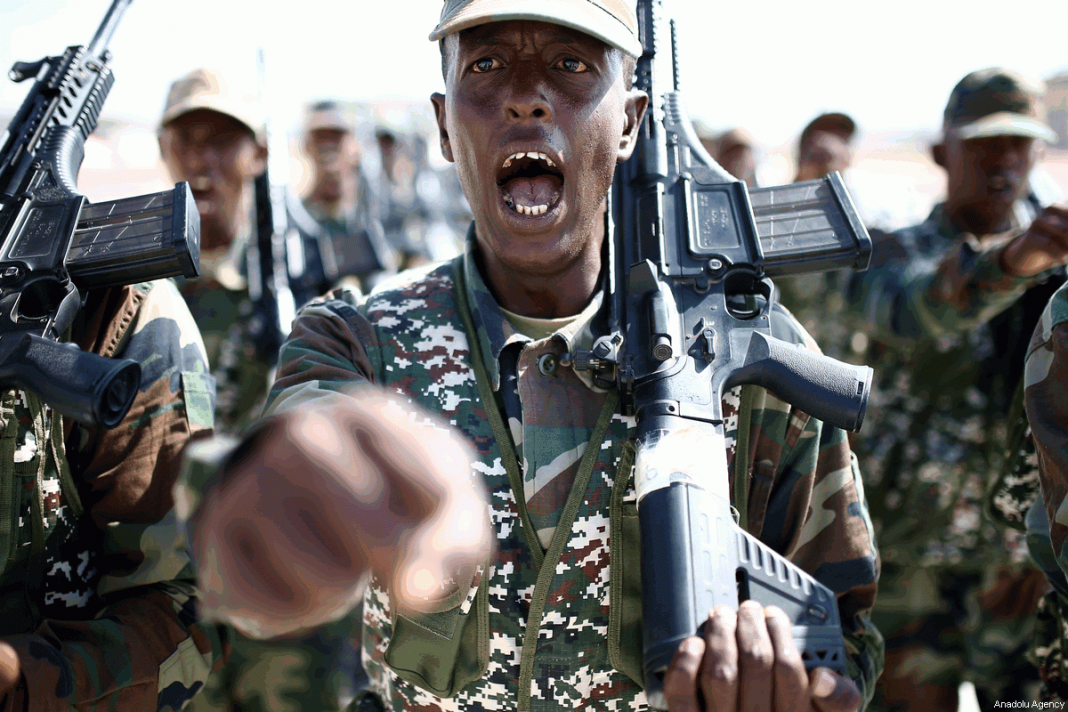 In a press conference he held at his office, the Somalia Minister for Information directly blamed the United Arab Emirates for encouraging insurrection and use of violence re-igniting fresh tensions between the two countries.

Minister Osman Dubbe responded angrily to a statement the UAE released decrying excessive use of force during the Friday clashes between the interim Somalia government and protesters supporting the Union of Presidential Candidates who previously declared non-recognition of a government whose mandated term expired. The opposition, as a result, demanded that they had no confidence in another attempt to revive an electoral process led by President Mohamed Abdullahi Farmajo as they blamed him for its failure in the first place.

Following the use of heavy firepower on the protesters and their leaders on Friday, the Emirates expressed its concern about the situation.

“The United Arab Emirates has expressed its grave concern over the deteriorating situation in the Somali capital, Mogadishu, as a result of ongoing violence and the excessive use of force against civilians,” a UAE Foreign Ministry statement said.

The Emirates Ministry of Foreign Affairs and International Cooperation called on the Somalia government ‘upon the interim government and all parties to demonstrate the highest levels of restraint in order to achieve Somalia’s aspirations to build a secure and stable future for all.

The statement reaffirmed ‘its support for all international efforts and initiatives to conduct transparent and fair elections on the specified date and urged Somali parties to join hands to confront the threat of terrorism and extremism’.

Abu Dhabi hoped ‘that stability would prevail in Somalia in a way that preserves its national sovereignty and fulfills the aspirations of its brotherly people’.

Minister Dubbe, obviously, took umbrage at the use of words ‘excessive force’  and ‘interim 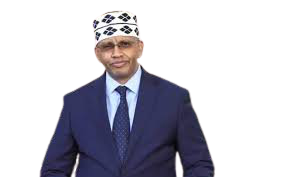 government’ contained in the Emirates statement which, according to him, lent another hue to the Emirates message.

He accused the Arabian Gulf nation of fomenting unrest in his country by legitimizing insurrection in the country’s capital.

“We have received a great number of supportive messages from Arab countries who showed concern over people in the capital hollering that there was no government in place,” he said, without naming which countries they were.

“But,” he said, “the Emirates statement carried a different kind of message’.

The UAE statement, he stated, was ‘inconsistent with international diplomacy, brotherly relations between the two countries, and Arab culture’.

“The United Arab Emirates wants Somalia to be like Yemen and Libya and wants to create in Somalia displacement, violence, and backwardness, and that is something the Somali people are wary of,” he added, gunning a grave accusation directly at the UAE.

Minister Dubbe conveniently chose to mention that the same statement concluded its expression with words that unequivocally supported the sovereignty and stability of the country.

“The UAE expressed its hope that stability would prevail in Somalia in a way that preserves its national sovereignty and fulfills the aspirations of its brotherly people,” the UAE message concluded its missive to Somalia.

The Minister did not, however, explain why he was offended by the statement since his government’s mandated term has run out on February 8 and that excessive force has been used on the protesters on Friday causing the direct or indirect loss of life of nine people during that day and in subsequent, mop-up operations, according to the caasimada online.

He did not, either, allude to the fact that Somalia had fallen out with the UAE during the outbreak of the Gulf Crisis choosing Qatar over its long-standing relations with it. The UAE supported Somalia policing efforts and paid heftily towards the upkeep of security during its more critical years at the peak of the fight against al-Shabaab.

Neither did he mention that Somalia, still harbouring jurisdiction over the Republic of Somaliland, tried to block a US$442-million DP World Development project on Berbera. Failing to put a spanner on that wheel, Somalia cried foul and interference blaming the UAE for subverting Somalia’s sovereignty and ‘internal affairs’. 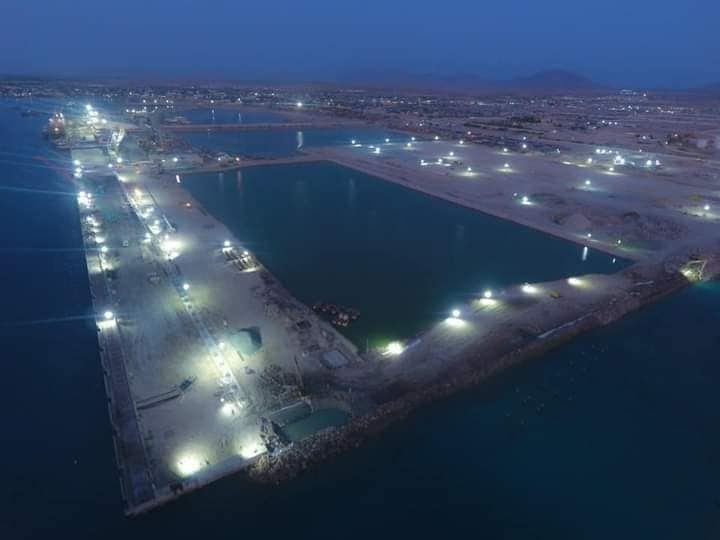 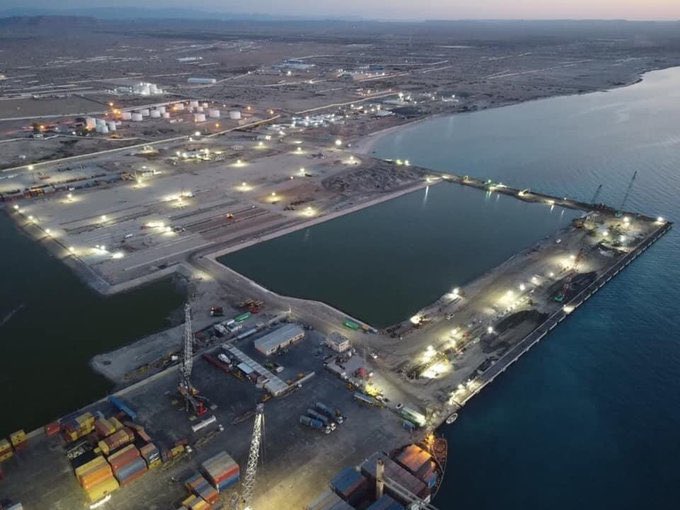 On Saturday, the Somalia Foreign Ministry issued a statement which, also, made an oblique reference to foreign interventions without directly putting the blame on any identifiable country or person(s).

“We, therefore, deplore and warn against some of the misinformed and misleading statements that disregard the facts and at times appear to be supporting insurrection, from some quarters, that are well known for their unceremonious acts in the region, falsely posing as the master of another nation’s future, in contradiction of the norms and principles of international law,” the Somalia foreign ministry stated.

The statement also shifted the blame of the violence Mogadishu witnessed on Friday, 19 February, and the failure of implementation of a September 17, 2020, agreement between the FGS and the Federal Member States, wholly on to the shoulders of opposition members.

“Presidential candidates chose to circumnavigate the process in order to pursue a path of illegality and armed insurrection disguised as a peaceful demonstration guaranteed under our constitution,” said a Somali Foreign Ministry statement.

The Ministry expressed in its statement satisfaction with the content of other messages from what it called ‘brotherly nations and regional bodies’. 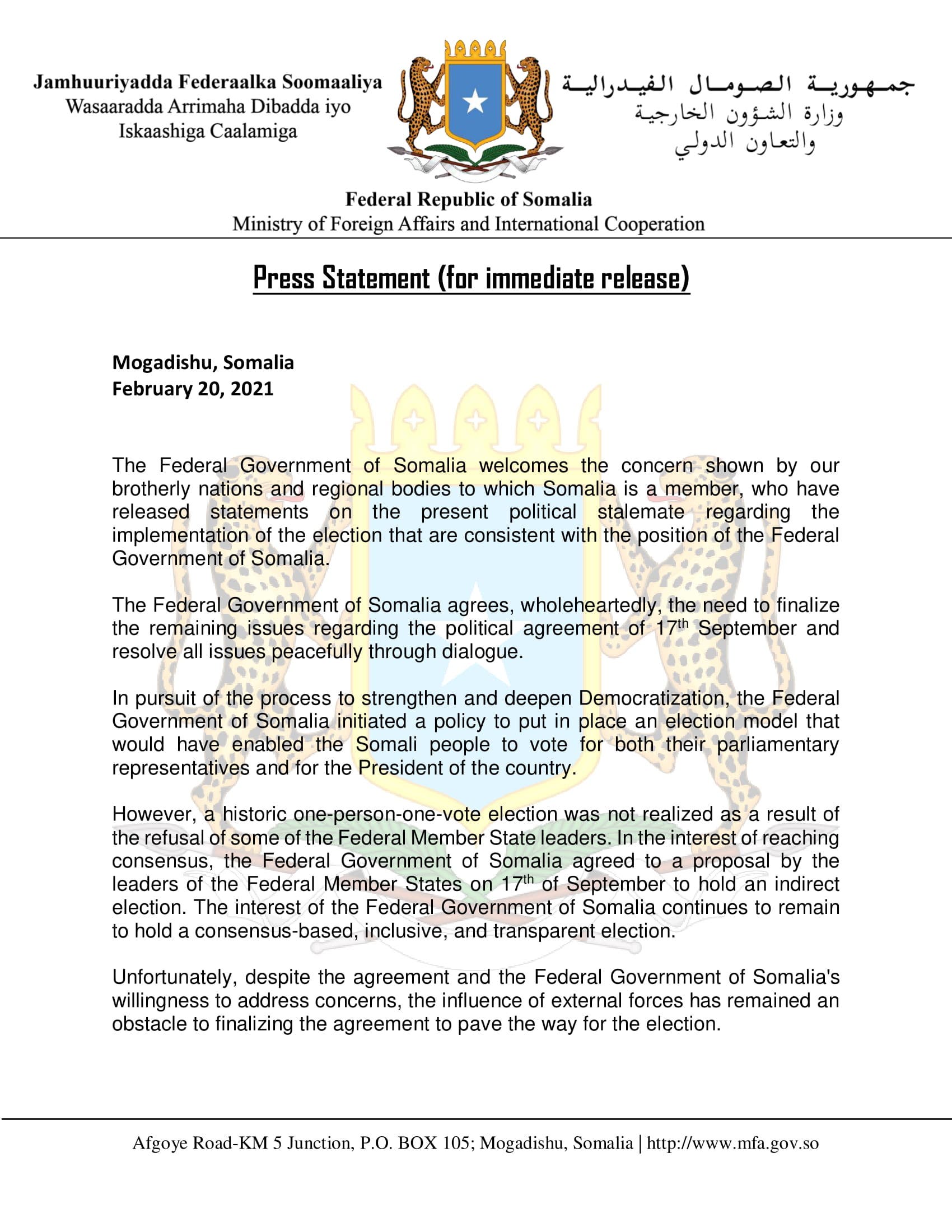 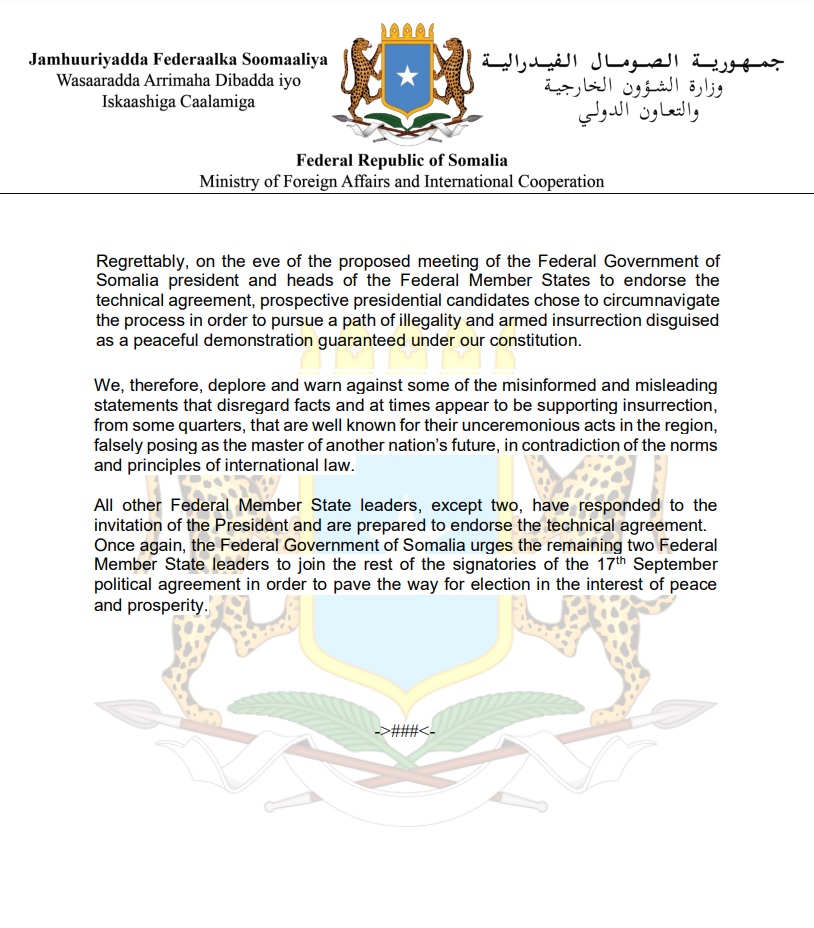 Another statement of the ministry’s of the day before, 19 February, also put the responsibility of failures the last of which being that day’s violence which the government led by firing on protesters on presidential candidates. The government stated that the Friday opposition rallies were nothing but ‘an armed insurrection under the guise of a political demonstration’.

“Rather than supporting the finalization of the outstanding issues on the implementation of the political agreement of 17 September the prospective presidential candidates chose to instigate chaos,” the Friday statement said.

“Unfortunately, those who aspire to the highest office in the land and want to lead the Somali nation have sought to bring instability at precisely the moment the Federal Government of Somalia with the support of the Somali people are protecting Somalia’s integrity and independence, while regaining their dignity and honor as an equal among the nation states of the globe,” it added.

The Somalia MoFA statements come at a time that the latest attempt to revive the electoral process appears to be doomed to failure again.

The Secretary-General of the Gulf Cooperation Council (GCC) Dr. Nayef Falah Mubarak Al-Hajraf too expressed concern over the tragic incidents, in the Federal Republic of Somalia, resulting in deaths and casualties, in the capital city of Mogadishu.

Equally the Kingdom of Saudi Arabia’s Foreign Ministry stated on Saturday that it was following with “great concern” the recent developments in Somalia, which have reportedly seen people killed and wounded at the capital Mogadishu.

Members of a technical committee that hammered out, ostensibly, a workable draft to breath fresh life on the stalemate left Mogadishu yesterday obviously dissatisfied with how President Farmajo received the proposal the Gedo issue spiking the Committee’s proposal.

The Special Representative of the Secretary-General of the United Nations for Somalia, James Swan, President Farmajo and the ‘Presidents’ of Hirshabelle, Galmudug and Southwest States, who usually towed the government line, were ensconced in intensive talks.

The SRSG is trying to salvage what is left of a situation that appears to be getting out of hand with the opposition sending out, Saturday, their take of the murky situation to the UN, the AU, the Arab League, the IOC and other international partners.

Meanwhile, opposition members vow a continuation of the civic protests despite the government promising them stiffer action on the pretest that it was enforcing a COVID-19 lockdown and social distancing.

The situation in Somalia, according to analysts, can lead to another civil war.