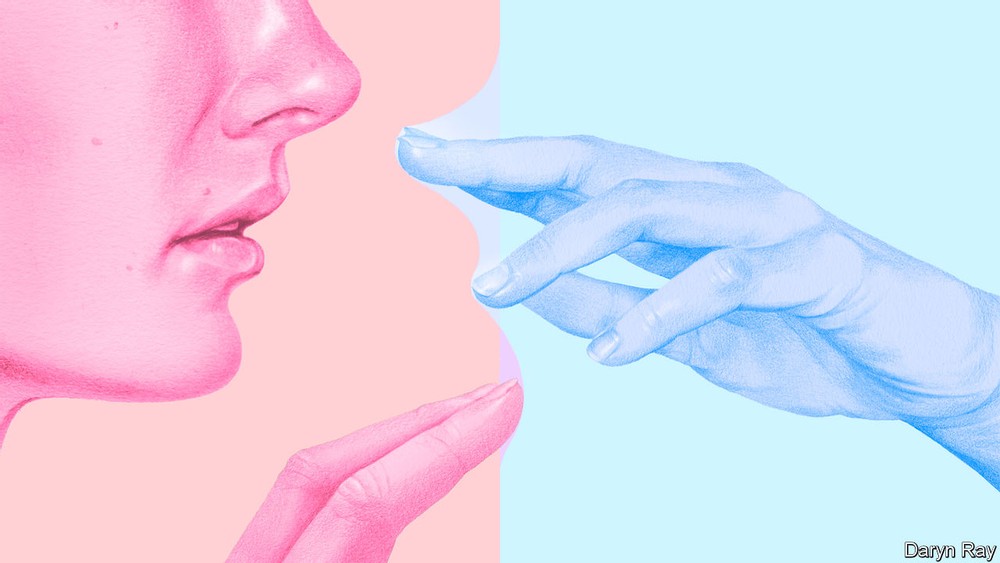 Touch is the only sense crucial to humans’ survival

It has been 11 months since anyone hugged Larry. The 62-year-old accountant lives alone in Chicago, which went into lockdown last March in response to covid-19. He has heart problems so he has stayed at home since then. The only people to touch him have been latex-sheathed nurses taking his blood pressure. Larry describes himself as a “touchy-feely” person. Sex is nice, but more than that he longs for casual platonic contact: hugs and handshakes. He lies in bed, he says, yearning to have someone to hold or to hold him.

The pandemic has been an exercise in subtraction. There are the voids left by loved ones who have succumbed to covid-19, the gaps where jobs and school used to be, and the absence of friends and family. And then there are the smaller things that are missing. To stop the spread of covid-19 people have forsaken the handshakes, pats, squeezes and strokes that warm daily interactions. The loss of any one hardly seems worthy of note.

And yet touch is as necessary to human survival as food and water, says Tiffany Field, director of the Touch Research Institute at the Miller School of Medicine, part of the University of Miami. It is the first sense to develop and the only one necessary for survival. We can live with the loss of sight or hearing. But without touch, which enables us to detect such stimuli as pressure, temperature and texture, we would be unable to walk or feel pain. Our skin is the vehicle through which we navigate the world.

Certain groups have long been starved of touch. For centuries lepers were deemed untouchable. Dalits, the lowest caste in India, were literally known as such. Solitary confinement is used as a punishment in prisons. In a film made before his death in 2015 Peter Collins, a Canadian convict locked up alone, said he craved so intensely the touch of another human that he pretended the flies walking on his skin were his wife’s fingers. But not until the pandemic, with its widespread social distancing, have such vast swathes of the population been deprived of friendly physical contact for so long.

Humans need touch to form close relationships. To improve its chances of survival, Homo sapiens evolved to live in groups. Humans “need to interact with each other”, explains Alberto Gallace, a psychobiologist at the University of Milano-Bicocca, which may explain why, like other social animals, they have developed a neurological system designed to respond to affectionate touch. Stimuli applied to the skin at a certain pressure and speed—“basically a caress”, says Dr Gallace—activate a dedicated nerve fibre in the skin. Stimulating this fibre lights up parts of the brain responsible for pleasure, releasing a cocktail of hormones, including dopamine, serotonin and oxytocin, that soothe anxiety and make us feel happier.

The importance of touch starts early. A review of scientific literature conducted in 2016 found that babies who had skin-to-skin contact with their mothers immediately after birth were 32% more likely to breastfeed successfully on their first attempt than those who did not. Several hours later, they also had better heart and lung function and higher blood-sugar levels. In one study in 1986 in America premature babies who were given regular massages for ten days shortly after they were born gained weight more quickly and left intensive care sooner than premature babies who were not. Their physical and cognitive development was also better than the control group in tests a year later.

The positive health effects continue. Touch depresses levels of cortisol, a hormone produced in response to stress. In addition to triggering the “flight or fight” response, cortisol smothers “natural killer cells”, a type of white blood cell that attacks viruses and bacteria. Touch can also increase the production of natural killer cells in patients with hiv and cancer, according to Dr Field. In 2014 researchers at Carnegie Mellon University observed that healthy adults who were hugged more frequently were less likely to get colds, perhaps because such embraces are a way of communicating affection, and people who feel cared for are less likely to fall ill.

A lack of touch, by contrast, is damaging. After controlling for factors such as poverty and quality of medical care, studies of infants show that the absence of touch leads to a broad range of developmental problems, argues David J. Linden, a professor of neuroscience at Johns Hopkins University, in a book called “Touch”. Children who are not cuddled tend to develop certain cognitive skills later than their peers. A lack of touch may fuel aggression. In 2002 Dr Field observed that compared with French adolescents, children in America received less affectionate physical contact and were more combative. But those who received daily massages became less aggressive after five days.

Without regular contact people can become “skin hungry”, a state in which they experience less touch than they want. The few studies that have been done into skin hunger suggest it is harmful. A survey of 509 adults from around the world in 2014 suggested that being deprived of touch was linked to loneliness, depression, stress, mood and anxiety disorders and secondary immune disorders.

The pandemic supercharged that. In a poll of 260 Americans who had been under lockdown for a month last April, conducted by Dr Field, 60% said that they longed for physical contact. The impact may be particularly acute in places where people are normally more tactile. In southern Italy “keeping your distance from someone is almost offensive”, says Luca Vullo, the author of a book on Italians’ non-verbal communication. And yet even Italians have surprised themselves with the level of their compliance with social-distancing measures. Most wear masks and keep their distance in queues (although when restrictions have been eased, many have found it harder to maintain, especially in restaurants, and particularly after a glass or two of wine). In Brazil, however, Claudia Matarazzo, an etiquette coach who wrote a guide in mid-2020 on how to limit physical contact without being rude, has given up trying to convince her compatriots to swap kisses for elbow bumps. Her efforts have not been helped by the president, Jair Bolsonaro, who regularly hugs and shakes hands with supporters. He failed to keep his distance even when he had covid-19.

By contrast, people from more reserved countries may hardly notice they are receiving less physical contact. Leonard Lim, a Singaporean tech worker, has not met anyone in the flesh, except for his wife, with whom he lives, and their parents, since last February. It did not occur to him that he had received less physical human contact over the past year until asked whether he had noticed its absence.

The sense of touch is easily overlooked. Its flashier cousins, vision and hearing, have entire art forms dedicated to them while chefs and perfumers serve our taste buds and nostrils. Scientists neglect it. For every research paper on touch, there are 100 on sight. In the 19th century European intellectuals dismissed touch as “a crude and uncivilised mode of perception”, inferior to sight, according to Constance Classen, a cultural historian. In Anglophone countries, the Victorian horror of the body gave popular ballast to this bias. Strictures against touch persisted in those countries into the next century. In the 1960s Sidney Jourard, a psychologist at the University of Florida, observed the behaviour of couples in coffee shops around the world. Over the course of an hour couples in Paris and Puerto Rico touched each other 110 and 180 times respectively. Their counterparts in Florida touched each other just twice. Those in London avoided any contact at all.

People in such countries are more demonstrative today. But Dr Field argues that many Americans were suffering from skin hunger before the pandemic. Among those surveyed by Dr Field in April only a fifth said that they touched their children frequently. Outside the home, tactile interaction has effectively been outlawed in many places. Many American states have banned teachers from touching their students. A lot of schools have similar policies. The MeToo movement means physical contact is rare in offices. And in recent decades the number of people living alone has shot up in many rich countries. So too has the time spent online. Virtual spaces bring users together but these connections are forged in an immaterial dimension. Screens are portals to digital worlds that require us to leave our bodies behind. Richard Kearney, a professor of philosophy at Boston College, calls this process “excarnation” and argues that it is fuelling a “crisis of touch”.

Some were trying to mend this before the pandemic. In Japan Deguchi Noriko, the founder of the Japan Touch Counselling Association, instructs new mothers, nurses and nursery teachers in the art of what she calls “skinship”, the act of “deepening our bond and trust with others” through clasping hands, hugging and stroking. In America urbanites were congregating at “cuddle parties”, hopeful that draping themselves over strangers would banish their loneliness.

In 2015 Madelon Guinazzo and Adam Lippin founded Cuddlist, a company which trains “cuddle therapists”. They suspected that many people longed for “platonic, mutual, consensual touch that’s purely about affection”, says Ms Guinazzo. That need was not being met, she argues, because of the “hypersexualisation” of touch in America. Their company has put therapists in contact with 50,000 clients around the world. They tend to be people experiencing too little touch or the unwelcome kind. Larry, the accountant from Chicago, began seeing Ms Guinazzo three years ago. He was uncomfortable with the idea of paying for hugs but his desire for contact exceeded the brief embraces he received from friends. He was surprised to find that the shoulder rubs, hugs and hand-holding brought him comfort and “a sense of joy”.

At present Larry can only meet Ms Guinazzo online. They evoke the sensation of touch through words and their imaginations—or try to. Zoom cuddles are not as potent as those in the flesh, says Larry. But in the age of distance, the skin-hungry must make do with what they can. Between February 10th and 13th 2020 sales of massage chairs in China were 436% higher than in the same period in 2019, according to Suning.com, a big retailer. Others are turning to technology to simulate caresses. CuteCircuit weaves haptic sensors into shirts which, it claims, can transmit the sensation of a hug using Bluetooth technology to corresponding shirts. Between April and December, traffic to its online shop surged by 238%. The pandemic has made many more people aware of their craving for touch, says Ms Guinazzo. Her business has suffered, but once covid-19 ebbs she expects demand to surge. People need to touch people, not just screens.