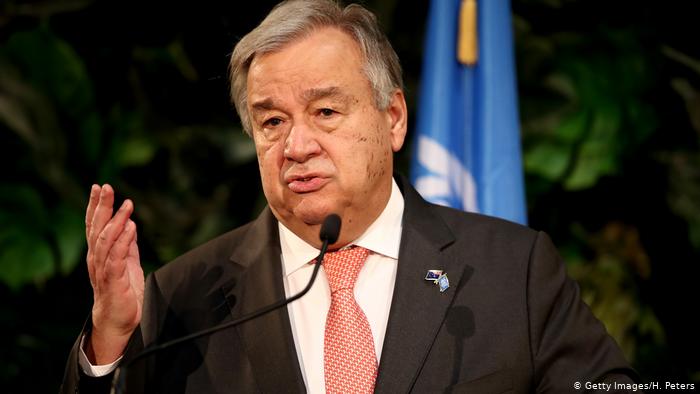 “The Secretary-General is gravely concerned by the outbreak of violence in Mogadishu and calls on all parties to exercise restraint and calm,” said a statement attributable to the head of the United Nations, Antonio Guterres.

The statement released to the media by Farhan Haq, Deputy Spokesperson for the Secretary-General, on 19 February 2021, enjoined political actors in Somalia to come together and start talking in earnest.

“The Secretary-General urges the Federal Government of Somalia and Federal Member States leaders to urgently come together and finalize political agreement on the way forward for national elections, in line with the 17 September electoral model,” the statement said.

But, the statement also pointed out that people had a right to assemble and to express their concerns in non-violent expressions which include peaceful rallies.

“The Secretary-General also calls for the full respect of the rights to peaceful assembly and freedom of expression,” it said. 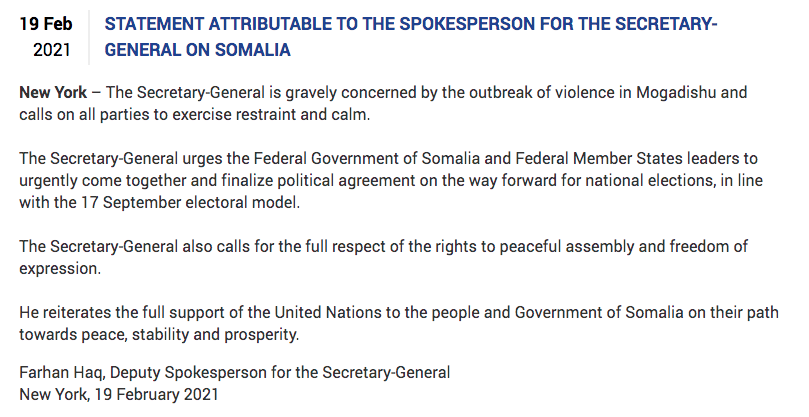 On another plane, the UN political office in Somalia, too, expressed concern on the escalating violence in Mogadishu which had the potential to spread further outwards into the rest of the country.

“The @UN in #Somalia is deeply concerned by armed clashes in Mogadishu overnight and on Friday morning, calls for calm and restraint by all parties involved, and urges that open lines of communication be maintained to help reduce tensions,” the office of SRSG James Swan said in its official Twitter account.

“The @UN in #Somalia notes that the clashes in Mogadishu underscore the urgent need for Federal Government and Federal Member State leaders to come together to reach political agreement on the implementation of the 17 September electoral model,” the Tweet added.

The UNSOM statement shied away from pointing fingers at either party as usual. Since maintaining diplomatic, middle-of-the-road platitudes never worked in situations like these, it may have helped if the office used its clout to rap some knuckles, as Somalia political commentators observed on social media since Friday.

Do you have any idea How things work in Somalia? Let me tell you it's not the way you're looking/watching from social media.

No wonder African dictators like Farmaajo are thriving when they hear such nonsense statement from the UN body. World leaders should stand up with democracy and demand actions of dictatorship and suppression can not be tolerated any longer.

Really? Protestors were shot at and this is all you can say? If the federal states take part in talks with the so called federal government they are going to be considered complicit in the actions of Farmaajo. Farmaajo's actions are criminal and should be treated as such.

Others were not as kind placing the blame for the lamentable situation squarely on UNSOM’s lap.

#UNSOM has been a joke for years now, are guys not tired of lying to yourself year after year, acting like everything is fine in Somalia, just to end up here again! You have funded this mess!

UNSOM, some commentators specifically pointed out lay in the nature of its meddling in affairs that could have been easily hammered between Somalis as in the case of its support to sham political elections of MPs for the better established, more Republic of Somaliland which in no way came under the jurisdiction of teetering Mogadishu.

As is pointed out above, one of the more abysmal failures of the UN in Somalia and Somaliland is a failure to assess political situations and the maintenance of a position that interpreted the loftier principles of the world body including the right to self-determination as a means to avoid more strife, more bloodshed.

Pathetic for entertaining sham model that included surrogate MP's for neighbouring countries and now lost all legitimacy it could have had!