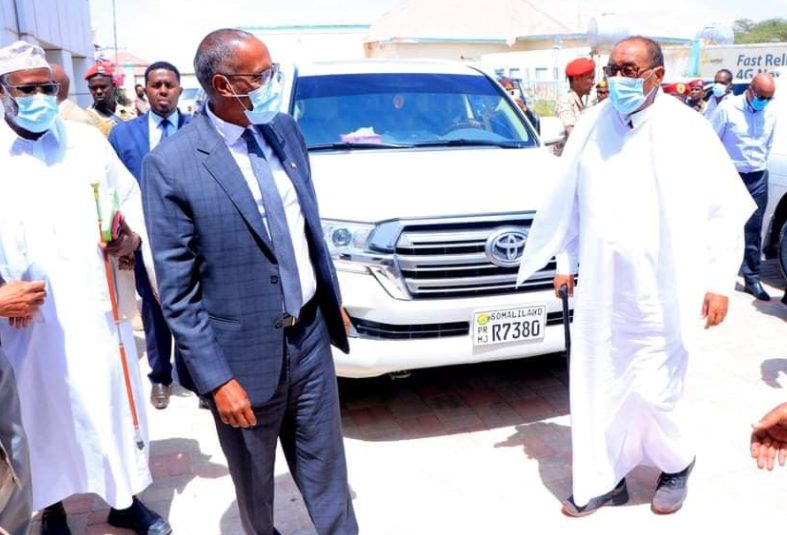 His Excellency the President of the Republic of Somaliland, Musa Bihi Abdi, visited the former President, Ahmed Mohamed Mohamoud ‘Siilaanyo’ at his residence and, later, personally saw him at Egal International Airport in rare courtesy gesture on Sunday morning.

President Bihi, in a gesture rarely witnessed between statesmen of this level anywhere in the world, escorted the former president who was flying on a private visit abroad to Egal International Airport – about ten kilometres away – where he saw him off.

“I visited the former president of the Republic of Somaliland at his residence and saw him off at the airport where he flew off from today,” President Bihi later tweeted.

President Bihi took over the reins of the country from President Siilaanyo who chose not to run for a second term in December 2017.

Both belong to the Kulmiye political party which President Siilaanyo founded along with a core number of other reformists in 2002.

Since then, the two maintained close relations which started during their freedom fighting years with the SNM.

The former president, Siilaanyo, was the longest-reigning leader of the Somali National Movement which emancipated Somaliland from the tyranny of the Somalia military region of General Mohamed Siyad Barre. President Bihi, a former, Russian-trained airforce pilot, was one of the key leaders of the movement.

The unprecedented gesture not only showed the contrast between Somalia and Somaliland but it, also, highlighted what a welcome contribution can make to the democracy-seeking world by example.

The civility and ramifications of the moment did not escape many.

HE Ahmed M Silanyo, to the Airport and bid him farewell. Compared with the frosty relationship between the current President of FGS and it's former presidents.This is testament that Somaliland is a model leader of internal stability and peace in the Horn of Africa. #Somaliland pic.twitter.com/Knigur8wFD

The brigadier colonel of Somaliland police forces is seeing off the former president of Somaliland at the airport, this is the clear differences between Somalia's ex-presidents and Somaliland pic.twitter.com/wPoaaF51tf