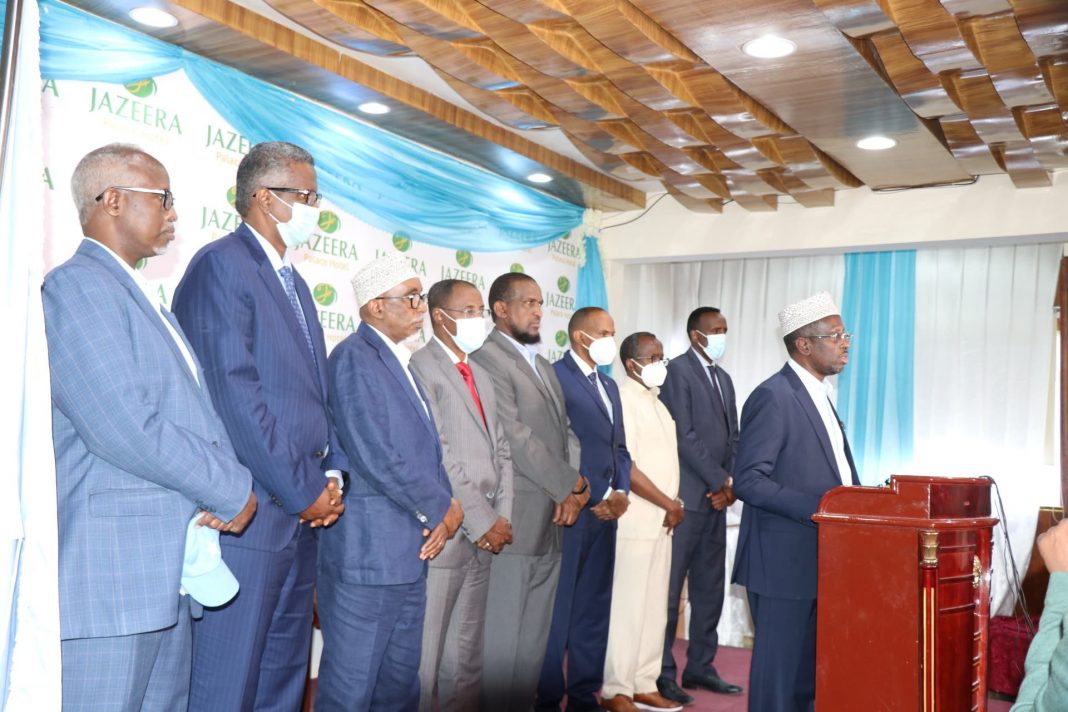 The Somalia Council of Candidates stopped a rally they scheduled for Saturday for fear of the government turning it into another blood bath.

Speaking to the press on Friday, the union of presidential hopefuls accused the interim government whose constitutional mandate expired on February 8 of going back on the deal it struck out with the opposition regarding the planned civic demonstrations.

The Farmajo government, represented by its Prime Minister, Mohamed Hussein Rooble, reached an agreement with the opposition allowing the protesters to come out on a peaceful rally on Saturday which was to end at the Unknown Soldier (Daljirka Dahsoon). Public addresses of opposition figures to the public would have happened there with the government policing the event without muscling in in any of the procedures.

According to Sheikh Sharif Sheikh Ahmed, one of the former Presidents of Somalia and a leading figure of the opposition union, the government started deploying heavily armed, specially trained paramilitary police and army units at the rallying point and at all strategic avenues leading to the area from as far as 4 to 5 kilometres away from the Unknown Soldier square.

“Per the agreement we have reached with the interim government, we have scheduled the public rally for Saturday. We expected the unelected, interim government to honour its part of the deal. It did not,. Instead, it deployed heavily armed troops at the rallying point and at all junctions and approached to the Daljirka Dahsoon,” Sheikh Sharif told the press.

“This is nothing but a replay of the fateful 19 February assault to prevent people to express their displeasure of the government’s heavy-handedness in the election process which it failed, and its abject disrespect of the 17 September 2020 FGS-FMS agreements which led to an impasse and an expiry of the term of the government nearly a month ago,” he added.

Sharif said, in light of the new developments, they would rather not risk people’s lives but would, rather, postpone the event to a later date during which they can protect themselves and the protesters to prevent another killing spree on the part of the government as it did on February 19 and the night before.

Hassan Sheikh Mohamoud, the Chairperson of the Council, and another former president, also speaking at the press conference, stated that the opposition was left no recourse but to put together security detachments of their own to ensure the candidates’ and protesters’ security.

This comes at a time a solution to the government-centred electoral impasse appears as remote as it had been since the government reneged on the September agreements of last year.

International partners led by the UN SRSG and the UN Embassy in Mogadishu tried to salvage what was left of a tattered trust between Villa Somalia and the rest of the electoral stakeholders without sparing neither the effort nor the financial backing it called for. But this also – as things stand – ends to no avail.

A proposition tabled by the opposition when the government’s term ended calling for a national traditional council including them and civil society elements were turned down by ex-president Farmajo and international partners wishing to cajole him to accept other less stringent terms.

International Partners may enforce that earlier proposal now as it is the only workable solution that is acceptable to the majority of the stakeholders.

Failure of the above augurs ill for a country that has not seen a day of peace for the past 30 years even though the world has pumped more than US$5 billion to bolster its security and governance in the recent past.

Somalia, contrasting the peaceful, ultra-democratic Republic of Somaliland to the north – senior partner of a disastrous union which lasted for 30 years ending in 1991, is presently rated as the worst failed state in the world.