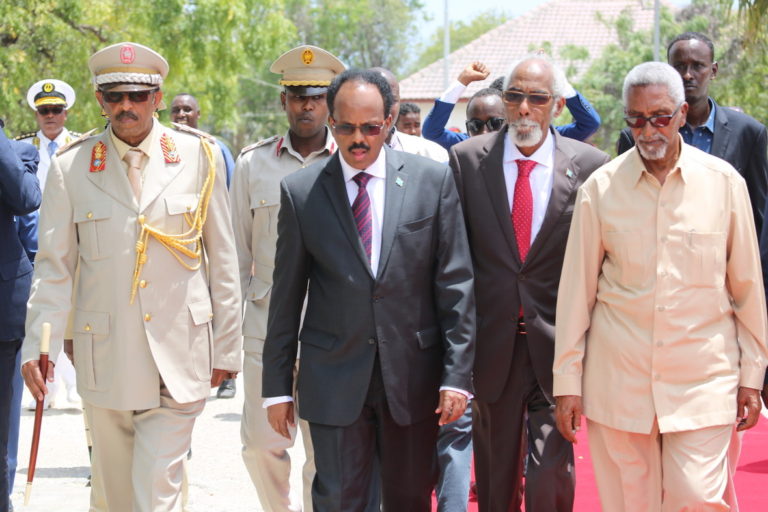 The election of President Mohamed Abdullahi Farmajo on 8th February 2017 was welcomed with  jubilation and hope. It was expected that during the mandate of the celebrated new president (2017-2021) of Somalia, will usher a new attitude of the Recovery from State-Collapse (RSC) that started on the occasion of the formation of Transitional National Government (TNG), in 2000 in Djibouti.  The resuscitation of Somalia turned into a process of incremental achievement of the elements of statehood that were completely withered away by more than two decades of military dictatorship (1969 -1991). The recovery process has been gaining momentum until the election of Farmajo, towards the convergence into harmonious synergy between forged legal system and web of institutions established by the same legal system, while the public officials at every level, without exception, shall be bind only to rule of law when discharging respective competences.

Starting from taking oath of office until the end of his mandate on 7th February, president Farmajo has been using a unique variant of Democratic Backsliding (DB). The concept of DB denotes “state-led debilitation or the elimination of any of the political institutions that sustains an existing democracy.”[1] In order to achieve his held objective of undermining the progresses of RSC, the post collapse fifth president of Somalia engaged with particular fascine that scholars of Democratic Backsliding (DB) coined with Executive Aggrandizement (EA).  Unlike blatant military coup that inflicts sudden death of democratic government, such as the 1969 military coup d’état, EA variant occurs at slower pace carried “when elected executives weaken checks on executive power one by one, undertaking a series of institutional changes that hamper the power of opposition forces to challenge executive preferences”[2].What actually happened during the reign of the post state collapse fifth president, is the phenomena of Presidential Aggrandizement (PA) in breach of the letter and the content of chapter VII of the Federal Provisional Constitution (FPC), which is specific to all matters concerning the President of the Republic.  The principal responsibilities and powers of the president are provided in Article 90 and include the assent of laws passed by the two houses of the Federal Parliament, appointment of public officials approved by the Council of Ministers which is the only body that bears the responsibilities over the Executive Branch of the federal state of Somalia. The president is not part of the three branches of the republic (legislator, executive and Judiciary) but the head of the state. The President’s undertaking of an initiative on any matter within direct competences of either of three independent organs, is nothing else but commitment of impeachable constitutional bridge. The Presidential Aggrandizement that president Farmajo performed, however, constitute total constitutional Hijack.

The first step of the unfolding of the execution of PA was the turning of the executive branch of the Federal Republic of Somalia into an arm of the president, away from constitutional functions of such organ as established in Chapter VIII. Contrary to its obligation to the nation, the federal executive has become an instrument of the elimination of all possible constraints against the vagaries of the president including the degradation of the legislative organ to a rubber stamp and the submission of already fledgling judiciary to the presidency. The mimicked council of ministers undertook the toppling of leadership of three Federal Member States (FMS) by installing in all organs of these states with individuals that are loyal only to the president, in addition of the president’s illegal annexation of Gedo region from Jubbaland state.

The security sector is one that Farmajo has destroyed and messed up the most, because of his departure from the National Security Architecture by building of parallel troops which is now spiraling crises within the national Army. The squatter in chief of Villa Somalia, indeed has become a threat to peace and stability in Somalia and the region at large.

By the expiry of his constitutional mandate on 7th February 2021, Farmajo felt confident of the possession of loyal military might with with adequate training and lethal weapons to crash any attempt to dislodge his commitment to remain in power beyond his mandate. The ongoing retention of Farmajo is commitment of former incumbent’s coup on 8th February 2021 and is decisive to retain the presidency under any circumstance.  Eight February will be recorded as the date that the only surviving provision (Article 91 on the term of president) after four years of constant violation of all the other articles of constitutional text, one by one, precipitated Somalia into brutal unconstitutional order.

After of all sorts of impediments of exploring real possibilities and making commitments to holding credible universal suffrage elections was exerted, Farmajo has also sabotaged all chances of reaching political agreement on electoral model short of one person one vote before the end of constitutional time line of the legislature and the presidency. The 11 hour renunciation of his verbal assent of the final draft of an implementation agreement at Dhusamareeb 4 and the unceremonious departure from the venue, two days before the end of his mandate, is crystal clear of the deliberate decision to continue to hold on to power indefinitely, in ex ante, instead of facing risk of competitive election or political agreement that would limit the exclusive authority of the former incumbent over the implementation of the election.

Farmajo’s continuation of claim to the presidency renders him guilty of violation of oath to office and disqualification to stand to elections to public offices. Further, the abortions of the peaceful demonstration called by the Council of Presidential Candidates (CPC) on 19 February 2021 by acts of takeover of the site designated for the demonstration, the attack of the temporary lodge of the two former presidents, former speaker of the house and dispersion of the peaceful demonstrators by live ammunition aggravated the guiltiness of the fifth president to the threshold of commitment of serious crimes.  Farmajo’s continued infringements of the negotiations between PM Roble and CPC, including the denial of the opposition to hold a peaceful demonstration initially agreed to take place on 6th march 2021, shows his lack of commitment to any attempt to resolve Somalia’s political deadlock.

The sequencing of the events all within February this year confirm that all options that could have leveraged the unlocking of the impasse and holding free and fair elections from within the Somalia’s political and social spectrum are exhausted as long as Farmajo remains a factor.  The walking out  of the  Dhusamareeb 4 by Farmajo have brought to dead end the potential of FGS and FMSs as decisional framework on electoral matters past expiry of electoral deadline of 7 February 2021.

The still undisclosed implementation option of 17 September agreement by a technical team on 15-16 February in Baidaba is a non-starter because the legality of the caller of event has already expired at the time of convoking the meeting.

It is equally beyond any doubt that Farmajo will not accept raising questions on his current claim of the presidency, because he himself knows his hold on to power is illegal. Similarly he is extremely resolute to resist any opening to new negotiations that would make more inclusive for any new deliberation on the terms of the implementation of 17 September agreement, as this could make  the outcome uncertain of his reelection to a fresh mandate (2021 – 2025). Finally, the incident of 19 February is the exhibition of his readiness of holding to power by the use of force instead of risking to stand to an election with uncertain outcome.

The believing of a sustainable rouge state, properly only similar  to the Asias Afwerke iron fist in Eritrea, a nation like Somalia that has defeated  20 year rule of a despotic military dictatorship, is a strange buzzle. The responsibility of resisting to succumb to such fallacy and to continue its recovery from state collapse rests with the Somali people. What boggles the mind is, however, the International Community’s (IC) backing of Farmajo for four good years of unmaking of the gains of peace and state building that IC itself had a great share of investments and moreover the persistence of giving oxygen to continue the current illegal claim to power while remaining indifferent to the crimes committed by his cronies on his behalf.

Cognizant of the vital role of the international community in this critical conjuncture and the vision of gaining honorable position in the world arena, some background review of IC’s dealings in Somalia in particular during the recovery period (2000 -2017) may provide some clues, instead of rushing into a trap of conspiracy theories.

While ruling out any political involvement of external actors in internal affairs of a country without interests attached, the sequences the below present some of the bilateral and multilateral involvements in Somalia:

The sequences of the political dynamics of reconciliation, peace building and state formation in Somalia shows:

In the first place it is hard to dispute that the prevailing conditions in the aftermath of state collapse of the country, did not warrant any possibility for representatives of Somali communities to come together by themselves. The overwhelming participation of Djibouti’s initiative, against many odds, was a demonstration of desperate need for Somalis coming back together. Secondly, starting from the first post state collapse Transitional National Government,  never a conflict over specific or power struggle between Somalia’s political elite in power or outside the power was sorted out internally by consensus or by non-farcical constitutional means without the support of the IC as deal maker. Thirdly, in spite of many unmet targets, pervasive corruption, insistence of channels of public participation in the decision that impact the lives of the ordinary citizens, there was tangible and progress of recovery process prior to the surge of Farmajo to the presidency.

The worldwide democratic backsliding was intensified from President Trump’s oath to office, two weeks before the election of Farmajo, which could be one among many factors of IC’s inability to stand united against the most egregious threat to peace and stability of Somalia and the region at large, committed by the current illegal occupant of Villa Somalia. The rise of bilateralism after Trump’s damn of the Multilateralism could be part of the IC’s recent lack of resolve to the FGS’s becoming a proxy agency to International Actors that are insensitive to rule of law and fueling regional crises in the Middle East and Horn of Africa.

In the absence of competent prosecutorial and Judiciary institutions in Somalia it is not possible to convict Mohamed Abdullahi Farmajo for the many constitutional violation and criminal charges. However, the slightest indication of the intension to sidestep this matter by continuing the same behavior of “business as usual” will yield stillbirth outcome.

The ongoing arrangements to hold a meeting at Halane, Mogadishu, called and facilitated by Somalia’s International Partners coincides at the climax of a new historic Juncture.  The success of the event is conditional to addressing the essence and scope of the issues that are at the center of the conflict and its present crystallization. The host (International Community) is not required to make judgmental decision on the matter but to enhance the participation of the venue to include the representative voices of CPC and Somaliland Council with same status as former president and FMS. Representation of civil society will be also valuable asset to the initiative. Only a gathering of this stature can deliver decisions that are adequate to what now is at stake in Somalia.

By Ahmed Abbas
Email: abbssone@yahoo.com
—————-
Ahmed Abbas was lecturer of the faculty of Economy of the Somali National University (1979-81), he is also member of the former committee of experts for the finalization of the current Provisional Constitution of Somalia.