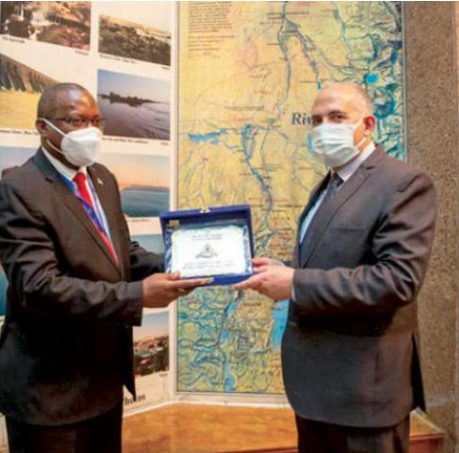 Egypt’s Minister of Water Resource and Irrigation Mohamed Abdel Aty and Burundi’s Minister of Environment and Agriculture Deo-Guide Rurema signed on Thursday a memorandum of understanding in the field of integrated water resources management.

This came as Egypt intensifies efforts to boost cooperation with Nile Basin countries in attempt to refute accusations by Ethiopia over “impeding development efforts” in these countries.

This includes establishing many rainwater harvesting dams, underground drinking water stations fish farms and river harbors and implementing projects to clean waterways and protect against the dangers of floods.

Rurema, who is currently on an official visit to Cairo, discussed with Abdel Aty means to bolster bilateral cooperation in the field of water resources.

Both ministers agreed to activate the MoU by allowing Egypt to carry out several technical studies required to construct rainwater harvesting dams in Burundi.

They also decided to hold virtual meetings between both countries’ officials to identify Burundi’s needs, provided that an Egyptian research team visits Burundi later to prepare a general scheme for water resources in the African country.

The team is also expected to study issues facing the water sector in Burundi and propose plans that could be implemented to address these problems.

He highlighted his country’s adherence to preserve its water rights and achieve the interests of the three countries in any concluded deal, reaffirming the need to reach a binding legal agreement that regulates the filling and operation of the GERD.

The dam and its impact on the Nile River represent one of the greatest challenges to Egypt, he noted, especially in light of Ethiopia’s unilateral filling of the dam reservoir that would threaten the lives of citizens and water installations.

In 2011, Addis Ababa began constructing the dam to generate power. It is now preparing to begin the second phase of filling the reservoir in the coming months, despite warnings from Sudan and Egypt.

NOAA’s “New Normal” Climate Report is Anything but Normal for U.S.