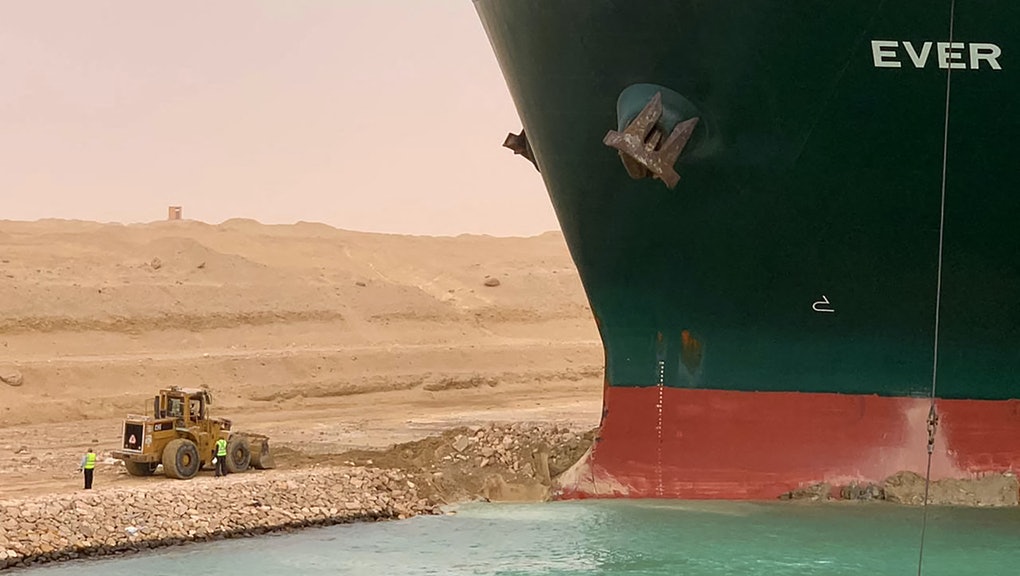 The Ever Given is still stuck in the Suez Canal, and it’s starting to create something of a global pile-up. The 1,300-feet-long container ship, one of the largest ever built, has been wedged sideways across the narrow water passage since Tuesday, and its inability to break free has held the billions of dollars’ worth of goods it’s carrying hostage and forced other freights to take longer alternate routes to their destinations. Experts expect that it could be weeks before the Ever Given is dislodged — and the longer it’s stuck, the bigger the bill, both in the cost of goods and in the environmental impact of the shipping disruptions.

The Ever Given itself, which is capable of carrying 20,000 containers, carries a noteworthy chunk of the global economy. And its absence is getting noticeable. According to The Washington Post, the massive ship is carrying everything from brand new cars to live animals to billions of dollars worth of crude oil. With all of that stuck, likely for weeks, it is expected that there could be an additional cost for these goods — and that’s before you account for all the other shipping traffic that the ship is blocking or forcing to take longer routes. CNBC reported that the Ever Given’s accidental blockade is costing about $400 million per hour in trade. The Suez Canal enables an estimated $9.6 billion in goods to move through it every day.

So far, per the Post, at least seven tankers carrying liquefied natural gas have been forced to change their route, swinging around the coast of southern Africa to make their way to Europe rather than cutting through Egypt. Another nine tankers are expected to make a similar diversion, according to The Guardian. The cost of sending goods the long way is significant: A report from Reuters says that shipping rates for crude oil have nearly doubled this week, a price hike that will surely be passed on to consumers.

And then there are the environmental costs. Shifting global shipping routes will make travel take longer and, in turn, result in more emissions. Jan Hoffman, a shipping logistics expert, tweeted that “higher speeds and deviation to catch up” as ships are forced to go all the way around Africa will lead to more greenhouse gas emissions, saying the total impact “remains to be seen.” James Vassie, an educational developer at the University of New South Wales, tweeted an estimation that diverted ships will see their overall emissions double as long as they have to continue taking the longer route.

The global shipping industry is already responsible for a massive amount of carbon emissions, as oil-guzzling tankers make their way across the ocean. The industry is responsible for more than 1 billion tons of greenhouse gas emissions each year, and ships often leave behind a wake of pollution that affects the water and air quality.

More than 80% of goods traded globally are moved on these pollution-causing ships. Cleaning up the shipping industry will be essential to combating climate change — which, as its effects get worse and the oceans continue to rise, will likely result in more disruptions to shipping. It won’t just be a ship lodged in a canal stopping the economy in its tracks, it’ll be increasingly devastating storms and waves that will lead to more lost goods, more costly trips, and more emissions.

Think of it this way: The Ever Given is climate change, and the tiny bulldozer sent to free it is our current efforts to address it. We’re gonna need some more shovels.