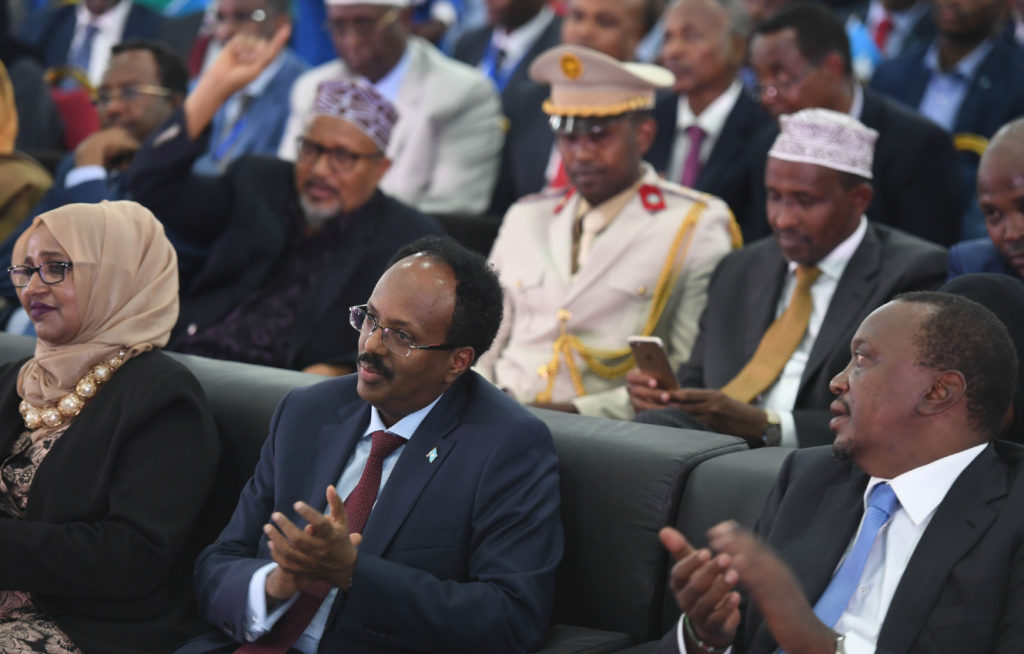 Somalia’s federal government careened into deeper political crisis after its mandate expired on Feb. 8 without an agreement to hold long-delayed presidential and parliamentary elections. Days before his term expired, incumbent President Mohamed Abdullahi Mohamed, commonly known as Farmajo, launched a failing effort to dislodge a months-long stand-off with federal member states on how to conduct the already contentious poll. The president and his rival state leaders traded blame for the paralyzing impasse as the country hurtled into a new phase of electoral uncertainty.

The current deadlock is a threat to Somalia’s short and halting experiment in federalism. It also highlights the deficits of strong-arm governance in a country and region — and at an international moment — when electoral transitions are haunted by the ever-present prospect of enduring violence. But, for Somalia, the stakes may be even higher. Al-Shabaab has fought the federal government to an effective stalemate. Yet, the group maintains the financial capacity, tactical prowess, and derring-do to execute bloody terrorist attacks at home and abroad. Meanwhile, the coalition of international partners supporting the federal government has slowly tired of the costs borne in blood and treasure after a decade-plus of near-persistent conflict.

Yet, it is the dysfunction of the federal government that has contributed most to the country’s enduring insecurity. Nowhere is this challenge more visible than in the past year of electoral chaos — a calamity the incumbent president and his political rivals, in their failure to achieve meaningful political accommodation, spurred. The intransigence of the current political moment is itself quite insightful. It is an opportunity to re-examine Somalia’s experiment in federal governance — and the faults of a domineering approach to politics as embraced by the current incumbent. As proposals for a negotiated settlement with al-Shabaab circulate, the current electoral crisis suggests that, of the many obstacles to resolution that currently exist, none are more crippling than the enduring contest between the federal government and its state rivals.

Farmajo entered office in 2017 with much fanfare, buoyed by a reputation for pursuing aggressive bureaucratic reforms during his short-lived stint as prime minister between 2010 and 2011. He was forced from office in a contentious compromise that ended a similar electoral crisis whose shadow still lingers. His 2011 departure was a product of the Kampala Accord, an agreement signed in neighboring Uganda which negotiated the end to Somalia’s then-transitional government (despite extending its mandate for an additional year) and ushered in a new federal government — but not without political casualties or sacrifices, including Farmajo’s untimely exit.

A political accommodation may be harder to reach this time around. Widespread allegations of vote buying, bribery, intimidation, and violent coercion marred Farmajo’s election to the presidency in 2017. And while he emerged as the least-compromised candidate in a field of over 20 contestants, the luster of his anti-corruption persona appears to have lost its sheen. His tenure as president has been defined by an overweening desire to enforce federal control over Somalia’s federal member states — an objective vigorously resisted by state leaders, resulting in armed and violent confrontations between federal troops and state-aligned security services. This deadly struggle has paralyzed the much-needed completion of a still-provisional state constitution, the fortification of electoral procedures, and the consultative engagement between the federal government and member states that may have prevented the current crisis. What remains is a precarious tussle between Farmajo and state leaders while the future of the country’s ambitious state-building effort hangs in the balance.

The Swift Tumble of a Once-Popular Incumbent

As a staunch nationalist, Farmajo entered office seeking to expand the federal government’s authority over Somalia’s five other federal member states. This effort involved the installation of close confidants to powerful posts across the federal bureaucracy. It later evolved into federal intervention in local state elections — a campaign that powerful incumbents across the various federal member states opposed. Seemingly undeterred, the president forged forward in his efforts to not only weaken, but also challenge and replace state officials (including member state presidents) inimical to his centralization agenda.

In 2018 and again in 2020, Farmajo’s government reportedly engineered the removal and replacement of key political opponents in the central states of Galmudug, South West, and Hirshabelle. Similar charges of federal interference surrounded the 2019 polls in the northern and southern states of Puntland and Jubaland. Powerful incumbents in each of these states recoiled at the perceived encroachment of federal authority on state affairs. These crises set the stage for further confrontation in the fast-approaching federal elections then-scheduled for the end of 2020.

At the heart of these contests lies a failure by successive Somali governments to clarify and cement the boundaries of state and federal authority through a finalized federal constitution. Back in 2019, federal and state leaders made commitments to complete a constitutional review by June 2020. The review would have paved the way for an amended federal constitution and the establishment of a constitutional court and judicial service commission. It, however, lapsed without meaningful progress on the proposed objectives, leaving the state without a viable foundation from which to arbitrate electoral disputes, or any other entanglements between the federal and state governments.

By the time the COVID-19 pandemic erupted in early March 2020, relations between Farmajo and state leaders had been in a state of prolonged decline. When the pandemic struck, the incumbent president had just signed a new electoral law in February establishing a one-person, one-vote electoral system for the 2020 election. Faced with unrelenting opposition from state leaders, a fast-spreading virus, and recursive al-Shabaab attacks, he was forced to abandon an already impractical universal suffrage framework. Beyond its unrealistic ambitions, the one-person, one-vote design was also criticized as an underhanded delay tactic designed to extend Farmajo’s mandate under the guise of electoral preparation. He was instead forced to accept a compromise agreement in September that adopted a modified election framework fashioned after the indirect model used in the corruption-gripped 2017 elections.

Much like in 2017, traditional clan elders in each state would nominate delegates to an electoral college that voted for the 275-member lower house of parliament. State legislatures in each federal member state would separately elect members of the upper house of parliament — the senate — and, together, members of the upper and lower houses would elect a president to serve the next four-year term. While the new compromise model mirrored its 2017 predecessor, it expanded the number of delegates involved in the lower house electoral college from 51 to 101 delegates. This expansion raised the number of participants in the lower house election from 14,025 to 27,775 — a notable expansion in suffrage, albeit far short of the original one-person, one-vote design.

The September 2020 agreement also doubled the number of voting centers per member state from one to two sites. It also established federal and state election commissions to oversee the polls. The commissions (and their membership) soon thereafter evolved into the new front of confrontation for Farmajo, state leaders, and the broader opposition. Two of the president’s most recent predecessors accused him of installing acolytes and loyalists (including alleged members of the National Intelligence Service to various electoral committee positions. The broader opposition also accused him of deploying national troops to intimidate leaders in another distressing display of a willingness to use the state’s fractured, and increasingly politicized, military and security services to secure his station.

After months of delays, missed deadlines, and escalating tensions, 2020 closed at an electoral nadir. Farmajo and his rival state leaders failed to reach an agreement on the staffing of key electoral committees. Triple crises erupted elsewhere in the self-declared, semi-autonomous state of Somaliland, as well as in the southern and northern states of Jubaland and Puntland. State leaders in these three regions threatened to conduct a parallel election unless committee membership was resolutely resolved.

Meanwhile, federal troops clashed with state counterparts in Jubaland, where Farmajo accused neighboring Kenya of meddling in Somalia’s domestic affairs. The flashpoint in Jubaland re-ignited a long-running contest between Farmajo and Jubaland President Ahmed Mohamed Islam (also known as Madobe), whose close relationship with the Kenyan government undermined Farmajo’s efforts to exert federal control over Jubaland and its long southern border with Kenya. Farmajo deployed federal troops into the northern Jubaland region of Gedo, which abuts Kenya’s northeastern border, drawing criticism of election-related interference from Madobe. These deployments sparked lethal exchanges between federal and state troops that spilled over into the Kenyan side of the border.

In late December 2020, Farmajo severed all diplomatic relations with Nairobi after Kenya hosted Somaliland’s president and announced plans to open a Kenyan consulate in the Somaliland capital of Hargeisa while bypassing Mogadishu’s assent. The confrontation with Nairobi threatened to further unravel an already-frayed relationship between the two neighbors who have elsewhere clashed on maritime borders and feuded regarding Kenya’s alleged support for separatist groups in the Jubaland region.

These disputes have unfolded within the broader context of an al-Shabaab resurgence, the rapid departure of U.S. troops in late December 2020, and the expected drawdown and reconfiguration of the African Union’s peacekeeping mission, which is more formally known as the African Union Mission in Somalia. Each of these developments lowered the possibility that national polls would proceed before the Feb. 8 deadline. And with the incumbent ‘s term expired, a new round of talks between Farmajo and state leaders was scheduled for Feb. 15 but failed to resolve the attendant electoral impasse.

Farmajo is expected to remain in office despite opposition from opponents who rejected his proposed term extension and called for the installation of a transitional council to oversee a so far indeterminate electoral schedule. The United States, United Nations, and European Union have urged all domestic parties to reach a consensus that would break the current deadlock and facilitate a peaceful transition. These efforts have so far fallen short of a grand compromise. Protests swelled through the end of February, leading to violent skirmishes between protesters and security forces. And, while local leaders struck a last minute deal on Feb. 26 to suspend mass demonstrations, the opposition remains steadfast in its opposition to Farmajo’s continued hold on the presidency beyond his constitutional tenure.

This opposition has only grown stronger in recent weeks. Farmajo was publicly accused in late February of using the intelligence and security services as a praetorian guard that will secure and sustain his presidency indefinitely. It is therefore unlikely that an agreement to resolve the current crisis is in the immediate offing — an outcome that expands attack opportunities for al-Shabaab, whose recurrent attacks on civilians will continue to depress the already limited prospects of electoral participation.

Al-Shabaab has demonstrated its staying power and the group stands to benefit from prolonged electoral chaos. The prospect of a negotiated settlement may also stiffen its resolve as disarray roils its opponents in the federal government and their co-antagonists in the members states. This combination places both the federal government and the member states in a weakened position if negotiations were to materialize — a possibility that is still riddled with obstacles.

The relationship between the federal government and its member states is at its lowest point in years. Farmajo’s efforts to strengthen the presidency have left him isolated from member states whose collaboration is required if a federal system of governance is to survive. The collapse of this relationship has tattered his national agenda and may define his tenure and legacy . What began as a heralded presidency may conclude as a haunting reminder that federalism and strong-arm governance are unlikely partners in Somalia’s tortured path to recovery.

Peter Kirechu is the former director of the Conflict Finance and Irregular Threats Program at the Center for Advanced and Defense Studies. He is a specialist on illicit transnational networks and political conflict in the Middle East and Africa.

Source: War On The Rocks