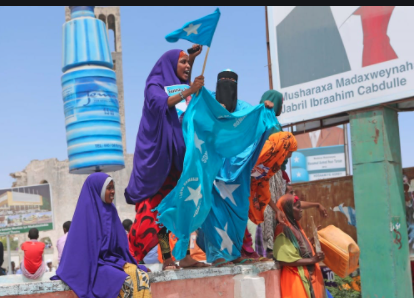 The country is at a standstill. Neither side is budging, and all sides are blaming each other for the impasse, risking the rise of political turmoil. Meanwhile, the United Nations, the United States, and other international partners are running like a chicken with its head severed trying to make sense of all this. It can officially be called a “shit show” and the most affected are the ordinary citizens who are grabbling with drought Hunger, the resurgence of Covid-19, Al-Shabaab, and a swarming locust that is eating away their crops.

The country is on edge and all eyes are on these leaders who so far cannot even agree on a friendly dinner let alone the election process. Everyone is behaving like a scorned wife and personal vendetta has overshadowed the important work at hand. The actors or spoilers are too many to name, but we can look at a few of the main players and antagonists. Those that are holding back from Somalia progressing.

The Council of Presidential Candidates, a coalition of ex Somali leaders the likes of Hassan Ali Khaire former prime minister of Somalia, former President Sharif Sheikh Ahmed, Former President Hassan Sheikh Mohamud, and the former Minister of Planning and International relations Abdirahman Abdishakur Warsame criticize the current president Mohamed Abdullahi Farmajo whose term ended on February 8, 2021, for failure to uphold the election on time and not creating a level playing field. That is as far as their grievances go. These candidates have not done or come up with any tangible solutions other than calling for a protest, threats posted on to their social media handles, and the occasional news brief aimed to indulge the international community. Their biggest playing card is aligning with the two disgruntled heads of states from Puntland and Jubaland and upper house speaker who wants to manage the symbolic Somaliland parliamentarians by forming a lame-duck coalition called “Somali National Salvation Forum”. The coalition levels more of the same accusations on to the Federal government. Nothing new here and nothing to see. Ordinary Somalis are not impressed by these has been of former Somali leaders and their cries have so far fallen into deaf ears. We are not seeing or hearing policy conversations, but rather how they do not want Mr. Farmajo to return.

Mohamed Abdullahi Farmajo is the incumbent President of Somalia, but his term ended on February 8, 2021. So, the question on everyone’s mind is why is he still running the country? Why is he calling the shots? Why hasn’t the country going to an election? There is a simple explanation to this, he has an army and a punch of “Yes” men at his disposal. Some of those “yes” men are Abdiaziz Hassan Mohamed “Laftagareen” the president of Southwest, Ahmed Abdi Karie (Qoorqoor) president of Galmudug, and Ali Abdullahi Hussein (Guudlaawe) president of Hirshabelle, three States within Somalia’s FMS. These are men that Farmajo supported in their posts and it is now a payback time. These men owe Farmajo a favor and he is cashing in. They virtually agree to everything anything he says surrounding the elections. They are his mouthpiece, and he is using them wisely. They agree with what Farmajo wants, and that is to continue ruling the country even if it means militarily. they are in cahoots with his unilateral decision-making style. We as ordinary Somalis have not seen or heard these men working towards solving the deadlock, other than hosting unfruitful meetings aimed to appease their master. They are simply props to the process and their biggest role is informing Farmajo on all thing’s election conversations.

Then there are the two aces – the presidents of Jubaland and Puntland (A. Madobe & Deni) – It is no surprise that they are at odds with virtually everyone involved in the elections process, of course, other than the “Council of Presidential Candidates”. They are vehemently against Farmajo not because he is necessarily bad for the country, no they are not doing any favors for the country they simply are holding personal grudges. Farmajo was against these two when they were running for their states. It is personal with these guys, and it is their turn to be torn in Farmajo’s side as he was when they were campaigning for the top spot in Jubaland and Puntland. Their main duty is to make sure Farmajo does not get re-elected. They are not doing this to save Somalis from Farmajo’s autocratic rule, but rather getting vengeance. Whatever it takes for Farmajo to not return is their motto.

Then there is the Somali parliament, who is virtually divided about the election process and the candidates. Too many divulging ideas convoluted the parliament and its work. Just like Farmajo, their mandate ended more than three months ago, yet they are holding sessions. These sessions are mostly disguised to confuse the public and create chaos. According, to the ordinary Somalis the parliament has one main agenda and that is to get a term extension for them and Farmajo. The speaker of parliament is a close ally to Farmajo and has been known to do the dirty work for him. A great example of this is the bogus motion brought against the former prime minister Hassan Ali Khaire which ended his premiership. It is no brainer that Somalis do not trust this parliament.

In the last four years, the parliament has not done any meaningful work and has been a political stooge for Farmajo. The majority of parliamentarians are in favor of term extension and this could tip the scale in favor of Farmajo. In recent days, the parliament started hosting sessions to address among other things the long-overdue talks about Covid-19.

However, most political analysts think this is just a cover-up for a more sinister plan like a surprise term extension. These recent sessions created so much attention that few parliamentarians who are opposed to Farmajo and term extension have been banned from the parliament after they caused a commotion and halted a session. What is evident is that the Somali parliament has been hijacked by parliamentarians who are only interested in their gains and not that of the country.

Somalia is headed in uncharted territory and if it continues in this path is sure to fall off the ledge. The country is experiencing a power struggle, a resurgence of clannism, and autocratic rule. The current leaders must find a middle ground and put aside their differences. Somalis do not want to go back to the lawlessness of the past. There is so much at stake to get it right.