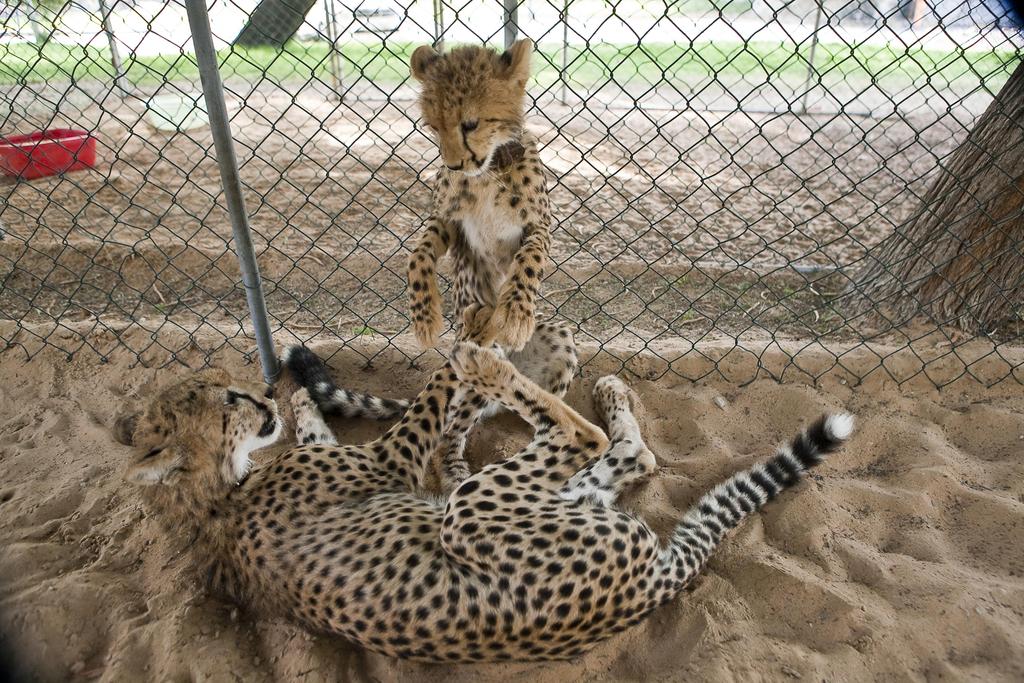 Researchers find at least 4,184 of the endangered big cats have been since 2009

Researchers trawled through 60,000 online adverts over the past decade to understand the extent of the trade.

Trafficking cases were compiled by experts in Mexico, Israel and Namibia and now published in the academic journal Science Direct.

Their investigation revealed more than 1,800 instances of trafficking and that at least 4,184 cheetahs have been moved from Africa to the Gulf since 2009.

The issue has been aggravated by the arrival of social media, where these animals are presented as pets – in vehicles or being walked around

Hiba Al Shehhi, acting director of biodiversity at the UAE’s Ministry of Climate Change and Environment, said the authorities continue to tighten border controls and tackle the illegal trade.

“Most of these ads are posted by fake accounts outside the country,” Ms Al Shehhi told The National.

“We are monitoring such sites to strengthen the enforcement of illegal wildlife trade legislation.

“The issue of uncontrolled keeping of big cats, including cheetahs, has been aggravated by the arrival of social media, where these animals are presented as pets – in vehicles or being walked around.”

Saudi Arabia, Kuwait and the UAE all appeared on a list of countries where online selling of endangered animals had previously occurred.

Of those recorded incidents, 87 per cent were of live animals, while 13 per cent involved parts or derivatives of cheetahs.

Patricia Tricorache, an illegal wildlife trade expert in Mexico City, who led the research, said: “We monitored sellers’ accounts that were brought to our attention by confidential informants who had dealt with them or are part of their networks.

“One of these informants provided us with Instagram usernames of the five largest sellers in the UAE.

“Posts on these accounts yielded hundreds of new discoveries that were added to the research.”

Where do trafficked big cats come from?

The report aimed to highlight the extent of illegal activities involving cheetahs by sharing an in-depth data set of potential trafficking routes, black market prices and the extent of online selling networks.

Information has been passed on to authorities to encourage prosecutions and training among law enforcement and border control.

More than 300 sources supplied data, including field informants, vets, cheetah owners, government officials and reports published by the Convention on International Trade in Endangered Species of Wild Fauna and Flora (Cites), a multilateral treaty to protect animals and plants.

Other research included in the study was taken from e-commerce and social media platforms where wildlife was sold.

Iran, where fewer than 50 cheetahs are thought to now exist, was responsible for three recorded trafficking cases during the decade-long research.

The other 41 nations referenced in the data included transit or destination countries, with 60 per cent of cheetahs recorded in Saudi Arabia, 14 per cent in Kuwait and 13 per cent in the UAE.

A total of 2,316 online adverts were recorded by the researchers, representing 528 different sellers.

Cites places the cheetah on its list of most endangered animals.

While it is illegal to sell wild cheetah, captive bred cats can be traded by only two registered facilities, both in South Africa.

In 2016, the UAE introduced a federal law banning the possession of predatory, dangerous and semi-dangerous animals, including cheetahs, without a special permit.

“Such efforts result in better control of the country’s points of entry for goods and passengers, leading to the confiscation of illegal wildlife items.”

Trade routes between the Horn of Africa and the GCC remain a key route for cheetah smugglers.

According to the UAE environment ministry, between 2010 and 2019, 37 live cheetahs from different countries were confiscated across the UAE points of entry.

However, in 2019, two cats intercepted from smugglers at the Saudi border were transferred to Al Ain Zoo. Two other cheetahs picked up at the border were sent to another, undisclosed, Emirates zoo.

The care of confiscated animals is one of several new UAE development projects to protect endangered animals.

The National Team for Combating Illegal Wildlife Trade was formed in a bid to co-ordinate anti-trafficking legislation and enforcement across the region, and is working with Cites to prevent online cheetah sales.

The Cheetah Conservation Fund in Somaliland is at the forefront of education and rehabilitation programmes for rescued cheetahs that had been destined for international markets.

The group said it did not see an increase in wild cubs seized from the illegal wildlife trade in 2020, but did get a closer look into the reasons why people in the Horn of Africa take cheetah cubs.

Most were farmers looking to protect livestock, while others were selling the cats to smugglers who sell cheetahs for thousands of dollars in the GCC.

In 2020, the Somaliland government confiscated 39 cubs.

“We believe only about half of those cubs were taken for international trade, about 20 individuals,” said Susan Yannetti a CCF senior advisor in strategic initiatives.

“They were intercepted in the waters just off the Somaliland coast during a sweep for illegal fishing vessels, most of which were Yemeni.

“These were definitely heading off the continent for international trade.”

In March, the UAE appointed Abdullah Muhammad al-Naqbi as its first trade representative to Somaliland.

Dr Laurie Marker, the CCF’s executive director, said the UAE is an important partner in wildlife conservation on the Arabian Peninsula and Africa.

“Having greater biodiversity is good for all of us, so we must keep cheetahs and other vulnerable species from becoming extinct,” she said.

“By working with governments in the Horn of Africa and on the Arabian Peninsula to conserve cheetahs, we will make the best progress.

“Somaliland and the UAE have emerged to become key allies for CCF in the fight against the illegal wildlife trade and in helping keep cheetahs in the wild.”