Home World News/International Politics/Diplomacy Somaliland and Taiwan: Two Territories with Few Friends but Each Other 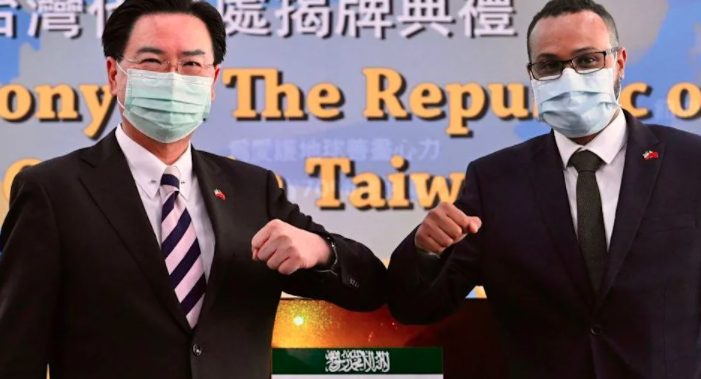 Both Taiwan and Somaliland are basically fully functioning territories which proudly declare their independence but neither is recognised internationally and now, as Mary Harper reports, they are moving closer together.

In fact, “humble” is misplaced as the mission is rather swish, located in a large villa next to the ministry of religious affairs in Somaliland’s capital, Hargeisa.

A Taiwanese flag flutters gently in the warm breeze – its red, white and blue colours striking against the clear blue sky.

Although some see their relationship as bizarre, Somaliland and Taiwan are in many ways natural bedfellows.

Both are unrecognised internationally and both have larger neighbours – Somalia and China – which insist they are part of their territories.

Somaliland and Taiwan established diplomatic relations last year to the fury of those neighbours.

Somalia denounced Taiwan for becoming friends with Somaliland. Chinese officials travelled to Somaliland and insisted it sever ties with Taiwan.

It is possible that China sees Taiwan’s relationship with Somaliland as a potential disruptor of its Belt and Road Initiative, whereby it plans to develop sea and land trade routes across Asia, the Middle East and Africa.

An obstructive Somaliland, with its highly strategic Berbera port, could block the continuity of its Maritime Silk Road along the eastern coast of Africa.

China might also be eyeing the Somaliland-Taiwan friendship a little nervously because it has established its first overseas military base anywhere in the world, in neighbouring Djibouti.

Taiwan sees Somaliland as the first step in its ambitions in the region.

“Somaliland is Taiwan’s gateway to East Africa,” says the Taiwanese representative in Somaliland, Allen Chenhwa Lou, sitting under a picture of his president, Tsai Ing-wen.

“From here I represent Taiwan in 10 East African countries, including Kenya and Ethiopia.”

Somaliland is one of just two African territories to have full diplomatic ties with Taiwan. The first was the tiny nation of Eswatini, which forged ties way back in 1968.

“Somaliland calls Taiwan its ‘big brother’,” says Mr Lou. “But I prefer to see our relationship as a sharing and cooperative one. We will always be together with Somaliland.

“We do not need to seek independence right now because we are already independent. What we both need is recognition. Both of us share this difficult situation.”

Find out more about Somaliland

But not everyone in Somaliland is impressed with the new-found friendship and wonder whether losing China as an ally is a price worth paying.

“The relationship with Taiwan shows the madness of Somalilanders,” she says.

“We thought Somaliland made overtures towards Taiwan as a way of trying to attract China by saying: ‘If you don’t marry us, we will marry the other one’. We never expected them to forge ties.

“It is a big mistake which China will never forget.”

But the authorities in Somaliland are not budging. Acting Foreign Minister, Liban Yousuf Osman, defends the relationship, saying the two territories have shared values of democracy and freedom.

“We welcome any country that wants a relationship with Somaliland, including China. But we won’t kick out Taiwan because of China.”

Find out more about Taiwan

Mr Osman has high ambitions for Somaliland. “We could become the Taiwan of the Horn of Africa. Taiwan is a success story and we want to replicate its development model.”

He explains how a growing number of countries are establishing offices in the capital, Hargeisa, including Turkey, Ethiopia, Djibouti, the European Union, the UK and the United Arab Emirates.

In 2020, representatives of The Kingdom of the Yellow Mountain, a piece of unclaimed land between Egypt and Sudan, visited Hargeisa in the hope of setting up an “embassy” there.

For its part, Somaliland has opened a diplomatic mission in Taiwan, headed by Mohamed Hagi.

“I really enjoy living here in Taipei,” he says.

“The weather is okay and the people are quite civilised. They want to learn about Africa from us.

“I have to explain to them that Somaliland is not Somalia, which they associate only with pirates and terrorists.”

Mr Hagi says that, as far as he knows, there are only three Somalilanders in Taiwan – himself and the two others who work with him.

But he is expecting more company soon, as 20 students from Somaliland have been awarded scholarships by Taiwan and there is a possibility of an influx of businesspeople as economic ties develop.

Taiwan’s Somaliland representative, Mr Lou, says he had a culture shock when he arrived in the territory in 2020 as it was his first visit to Africa. He lacks the facilities he had in other diplomatic postings, but has learned to enjoy the “simplicity and spirituality” of life in Somaliland.

Mr Lou explains how everyone thought he was from China when he first arrived.

“I like walking in the streets. Everybody stared at me and said: ‘China’. I said: ‘No, I am from Taiwan’, and they are beginning to learn.”

“But more needs to be done,” Mr Lou says. “I was on the beach in Berbera when a young girl, no more than five, came up to me. She only spoke Somali, but then she pointed at me and shouted ‘Covid-19!’. Once again, I said: ‘No, I am from Taiwan’, but I am not sure she understood.”

It is too early to tell whether this new-found friendship between two unrecognised territories will help them in their quest for international recognition, whether their relationship will be mutually profitable, or how far it will provoke China and Somalia.

But they have both functioned as de-facto independent states for decades and share a seemingly unshakeable desire to continue doing so.