SomTribune
Home World News/International Politics/Diplomacy Somalia Hits Back at UK Ambassador, Cautioning Somalians Not to Side with... 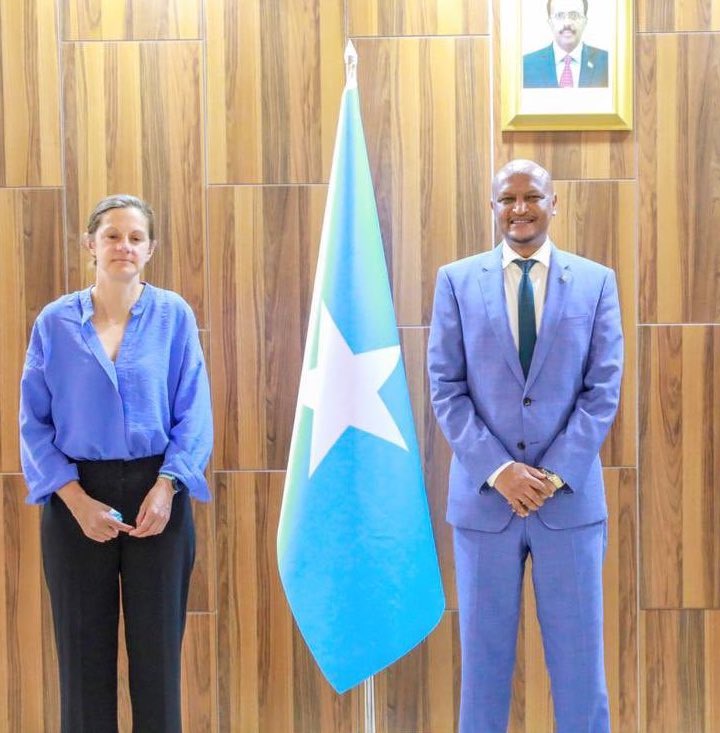 Office of Somalia Prime Minister has on Sunday run into an awkward situation after the government spokesman posted a misinforming tweet that falsely claimed that the UK’s ambassador to Mogadishu discussed a wide range of topics including the current political situation, strengthening relations and cooperation between the two countries, security and economic cooperation.

The tweet came shortly after Ambassador Kate Foster met with Somali Deputy Prime Minister, Mahdi Gulaid on Sunday.
But, Ambassador Foster immediately replied by clarifying the content of the discussion during the Sunday meeting tweeting “Constructive meeting with @KhadarGulaid discussing current political situation. Reaffirmed that the UK will not support term extensions. Emphasised the importance of an urgent return to a consensus-based electoral model.”
Ambassador Foster was referring to a unilateral decision on Monday in which the Somali Lower House of the parliament voted to extend by two year to President Mohamed Abdullahi Mohamed’s four-year term, which expired in February.
DEROGATORY EXPRESSION
However, when local journalists caught and reported the news by pressing the Office of the Prime Minister to reveal the truth regarding the content of the said meeting, the government spokesman and senior adviser to the Prime Minister, Mohamed Ibrahim Moalimuu, was uneasy and went further by using a derogatory expression against the ambassador.
“The Twitter posts of the infidels should not be used against the country. You can criticise the government, but do not side foreigners over your country, and do not let the love of the infidels [non-believers] overtake you,” writes Mohamed Ibrahim Moalimuureferring a term ‘infidel’ which is widely used by the al-Shabaab terror group to describe the non-Muslims and westerners. Notably, the term ‘infidel’ was once reportedly used by NISA chief, Fahad Yasin during a meeting with journalists in November 2019.
He said that he had the right to defend the country from the foreign “intervention” as far as the matter of president Farmajo’s term extension is concerned. The director of communications of the office of the prime minister did not respond when when contacted for further comments regarding the matter.
Western governments, who remain as the largest donors to Somalia including U.S, UK and the European Union strongly objected Farmajo’s term extension and even vowed to consider “changing” the nature of relations with Somalia, falling short of threatening sanctions.
US Secretary of State Antony Blinken said the US will “re-evaluate” bilateral relations with Somalia if the president forces through the extension.
Somali Opposition group, the National Salvation Forum and the federal member states of Puntland and Jubbaland, which also counts as member presidents of Puntland and Jubbaland states, warned boycotted the extension of the president’s term and called it “a threat” to Somalia’s peace and security.
The Horn Observer