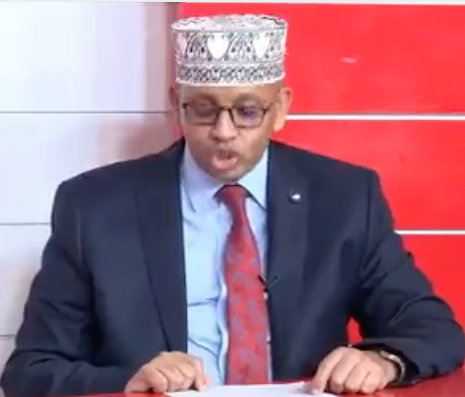 Only a couple of days after it asked the African Union to mediate in the election impassé it has largely created, and, perhaps, sensing defeat, Somalia accuses leading members of the African Union Peace and Security Council (AUPSC) of gross, internal ‘interference’.

Federal Somalia President, Mohamed Farmajo, whose expiry of his mandated term and the extension he engineered for himself through lame-duck parliament triggered the current incendiary situation in Somalia, travelled all the way to DR Congo to meet President Tishisekedi on Monday. He asked President Tshisekedi, who is the current Chairman of the African Union to mediate between him and other political stakeholders in the hope that the AU may convince opponents to accept his extended term. 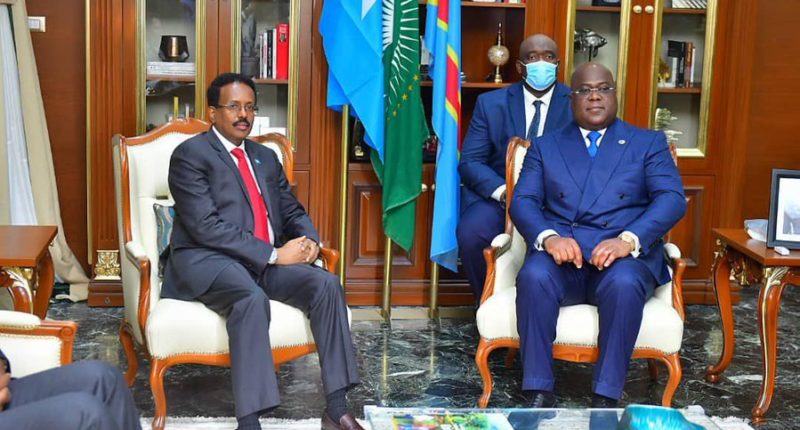 Chairman Tshisekedi tasked the Peace and Security Council to look into the matter. The AUPSC scheduled a meeting to deliberate the matter today, Thursday.

But, as soon as, the meeting was called Somalia started firing allegations of interference against members – notably Kenya and Djibouti.

“..It has come to our attention that two AUSPC members, namely, the Republic of Kenya and the Republic of Djibouti, are engaged in sinister campaigns aimed t derailing the political process in Somalia by trying to influence the outcome of AUPSC meeting to detriment of the future of the Somali people,” a Somalia statement delivered to the AU said. 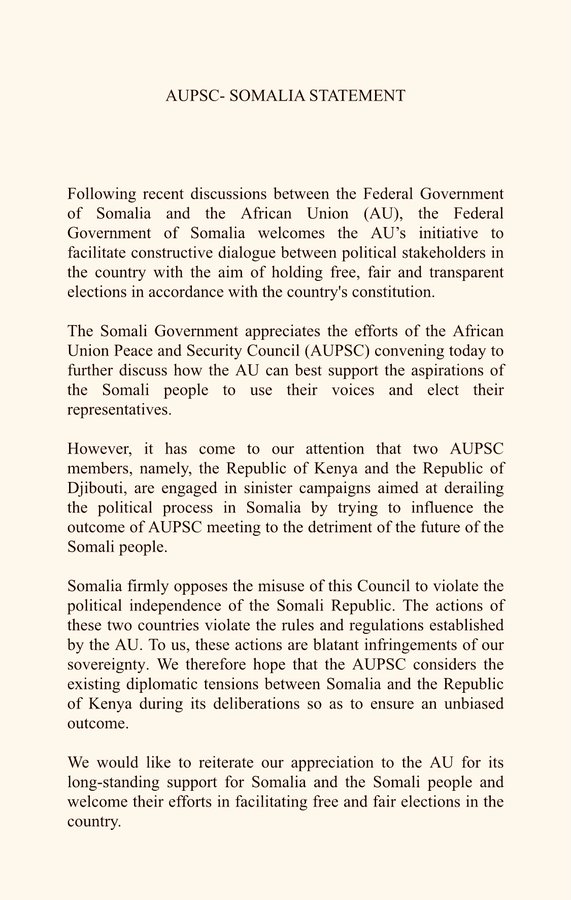 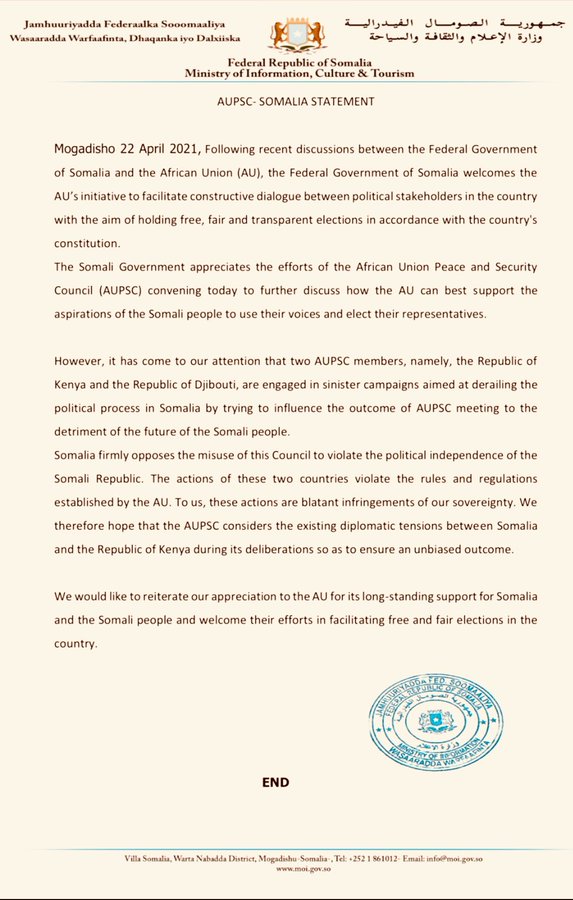 the use of the word by itself is loaded. On the one hand, it tries to cast aspersion on two prominent, regional leaders. On the other, it implies it has secured a nod of approval from an unspecified number of other members to go along with its plans and to, especially, rubber-stamp President Farmajo’s unlawful extension of term as it has been approved by a parliament whose term, itself, has expired months before the president’s.

Thirdly, Somalia aims to pick a quarrel with Djibouti to add to the dispute it had going already going with Kenya in order to convince locals that it was, in fact, these countries and the international partners who were to blame for the sorry state of affairs of the Somalia state.

Kenya and Djibouti have both contributed troops under the AMISOM command to guard Mogadishu against Al Shabaab and so lost hundreds of lives in the process since 2011.

To drive the insinuation of interference and partiality home, the Somalia Minister of Information, Osman Abokor Dubbe, granted a press conference during which he repeated the Somalia disparagement against Kenya and Djibouti.

“Federal Government of Somalia is aware of the outright interference of the countries of Kenya and Djibouti in the ongoing @_AfricanUnion led efforts to facilitate Africa led solutions and dialogue to enable the citizens of the Federal Republic of Somalia determine their future,” he later tweeted.

Federal Government of Somalia is aware of the outright interference of the countries of Kenya and Djibouti in the ongoing @_AfricanUnion led efforts to facilitate Africa led solutions and dialogue to enable the citizens of the Federal Republic of Somalia determine their future. pic.twitter.com/LXMx2HzRdm

The federal government beefed up security contingents guarding the Ministry of Information and its key personnel today.

The ministry, echoing the wishes of President Farmajo, had been most virulent and indiscriminate in accusations against almost everybody even including those whose hands fed it and whose lives defended it.

Analysts explain that to be on a constant attack is the only tactic now only open to Farmajo as he has painted himself into a corner, politically. Villa Somalia relies on countries such as Qatar, Turkey, and Ethiopia working behind the scenes to sway some support its way.

It is not only the opposition that has rejected Farmajo’s unexpected extension of term. International partners unanimously called Farmajo to forget it and to return to his dialogue with other stakeholders.

The US and the EU even obliquely intimated that if he did not, Farmajo and his Somalia may face other consequences that may include stringent sanctions.

The regional IGAD body to which Somalia belonged also urged him to return to the negotiating table.

The United Nations Security Council also shrugged off Farmajo’s unmandated extension asking him to go back to the parlay tent.

The Arab League is the latest to join the call for a resumption of talks between Farmajo and other stakeholders to resuscitate an electoral roadmap.

News Alert: Arab League has expressed its deep concerns over the recent situation in #Somalia, while calling on FGS & FMS leaders to immediately convene for dialogue to reach a political solution over the national election issue. pic.twitter.com/CWmj48tfxD

Farmajo came to power in 2017 at the height of his popularity but has since then been found to be an inept leader, as analysts put it, whose personal ambitions supersede national interests. According to documented reports he delivered not even 10% of his campaign promises despite the millions of US Dollars the world has put his way to do so. More than 60% of the Somalia national budget is also covered by the international community.

Moreover, the international community bankrolls nearly 30 000 security personnel to assist Somalia leaders to attain a stage where foreign troops can make an exit – to no avail.

The latest, a contingent of 144 Nigerian police officers full-equipped by the UN arrived in Mogadishu on Tuesday. 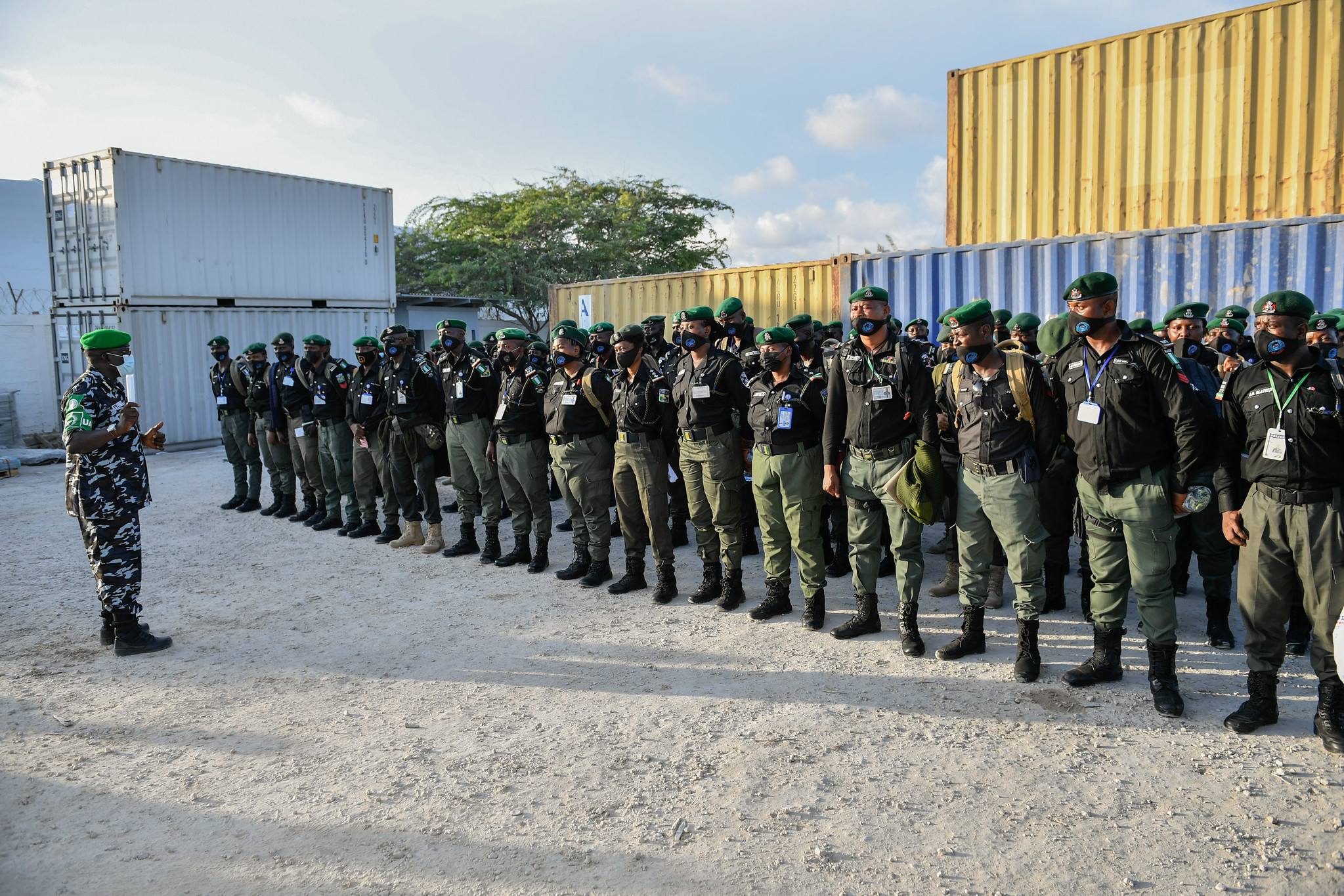 The #UnitedNations should have known better. All these armoured vehicles, armaments & trained personnel shipped to #Somalia by international, regional and individual organizations/countries will certainly end in the hands of Jihadists/clan militias as is continually happening. https://t.co/DIwdENjx0K

Reflecting on the situation, leading opposition members have relocated to more secure areas in Mogadishu moving away from areas where their support base could be overpowered.