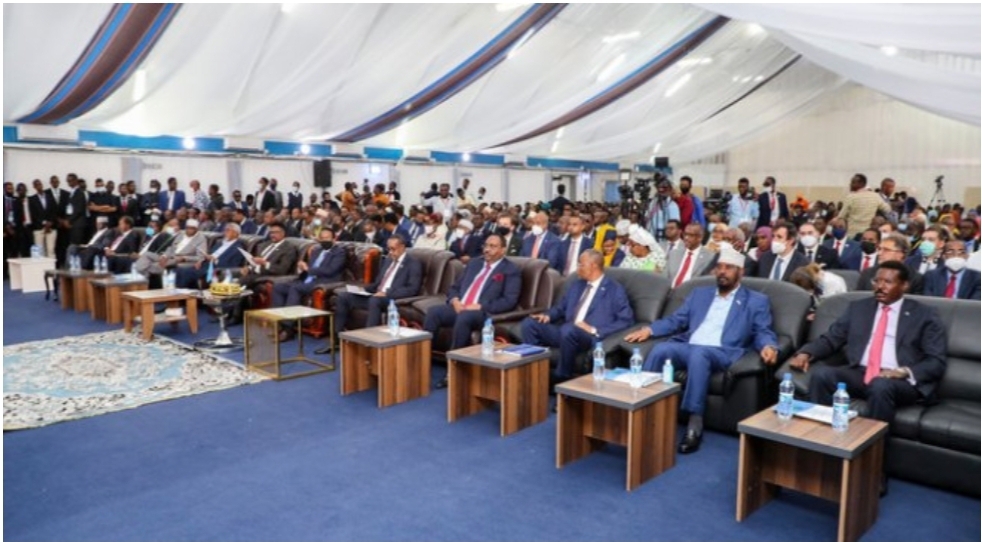 Together,  a communique that sought to resolve a number of Somalia governance and electoral bottlenecks stated Thursday, the federal member states and the federal government will work out the content and approach of talks with Somaliland it set for next year.

The Communique, in its roadmap annexe, under the ‘Completion of Somalia Governance’ structure, stated that the federal member states and the federal government would together first chart the direction, content, delegates, and other technical points starting from February 2022. 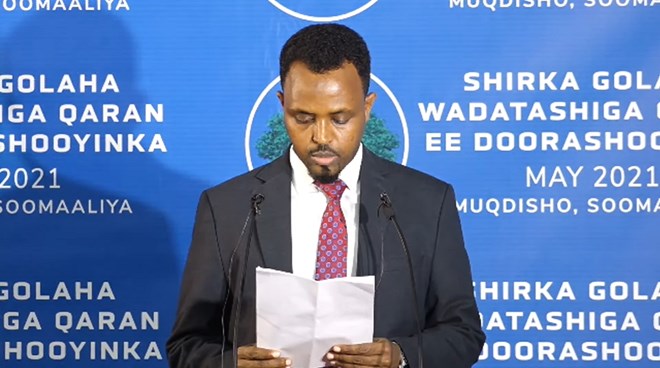 Assuming that the FMS and the FGS reach a consensus on how to deal with the Somaliland talks, actual talks will be held in August 2022.

Somaliland-Somalia talks have begun in 2012 under the auspices of the international community. Nothing came out of them as every point on which a consensus was hammered out was almost invariably reversed unilaterally by Somalia soon afterwards.

The two points dealing with the Somaliland talks reveal observers point out, several critical developments which have not been an issue on previous talks and schedules.

First, Somalia planned the talks if it led the talks and decided when they should happen and when they should not. That the participants at the Avizione Somalia Dialogue tent did neither justify nor offer any apologies on why Somalia stalled ‘progress’ made on the talks on previous occasions characterized the new attitude.

Secondly, Somalia set out to chart the schedule without so much as alluding to a consultation with the opposite party or the international partners that hitherto facilitated the talks underlined another tough line which assumed Somalia was the master.

Thirdly, never were the FMS an integral part of the talks. This particular point implies that accommodated was the contention of Puntland that it should be leading the talks as it was the only Somalia federal state which shared borders with the Republic of Somaliland. This adds another new, untenable stumbling block to the already crippled talks which Somaliland will never accept. Somaliland started the talks on the surmise that the two states which came together in 1960 will be on opposite sides of the table – and nothing less or more.

Another point related to the Somaliland issue, conferred authority on the interim Prime Minister, Mohamed Hussein Rooble, to lead the selection of parliamentary members for Somaliland. The exercise will be held at Avizione under the protection of AMISOM in due time.

To resolve contentious technicalities of selecting MPs for ‘Somaliland, the participants of this latest round of dialogue between the interim government and opposition members, decided that the Deputy Prime Minister, Mehdi Guleid, and Abdi Hashi, the federal parliament’s Upper House Speaker, would each nominate 4 members to the committee overseeing the selection of Somaliland MPs (SIET), and one member each to the federal indirect electoral team (FIET) and the conflict resolution committee. 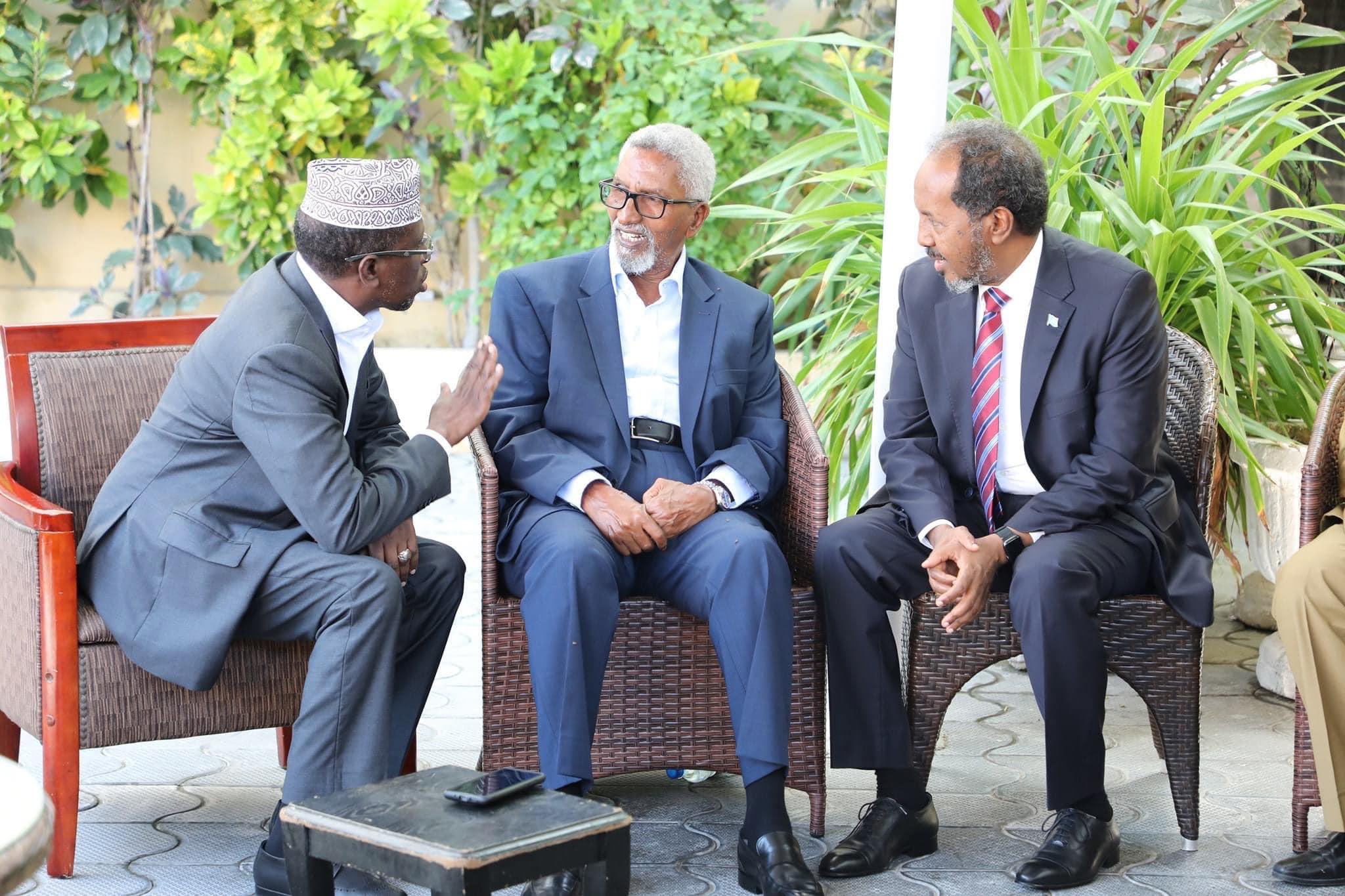 Neither Guleid nor Hashi nor any of the said MPs to be selected represent Somaliland since the unrecognized government had a fully functioning government intact with its executive, legislative and judiciary branches for the past 30 years. Guleid, Hashi and the rest of Somaliland-born loyalists to Villa Somalia have emigrated to Mogadishu seeking positions with successive Somalia administrations seeking to derail Somaliland political, economic and development initiatives..

None of them can freely set foot on Somaliland where they are locally known as opportunists and economic migrants.

Sadly the FGS efforts had always been either actively assisted or overlooked by an unrealistic international community – a fact which only exacerbates matters pushing back a solution to an amicable separation of the two erstwhile, uneasy partners.

The government of the Republic of Somaliland, currently busy preparing for the 31st May 2021, parliamentary and Local Councils election, has not yet responded to the new development. Calls to pull out from the talks have been gathering momentum in Somaliland of recent.

Opposition leader, Faisal Ali Waraabe, UCID leader, called for a complete withdrawal from the talks as, according to him, the frequent postponements and disrespect to desired objectives. A growing majority of Somalilanders are of the same mind.

Heavyweight international observers, representing regional and international bodies, have already arrived in Hargeisa to monitor the fallibility of the eighth 1Person-1Vite exercise the Republic of Somaliland has undertaken since 2001 – a feat Somalia has yet to attempt. 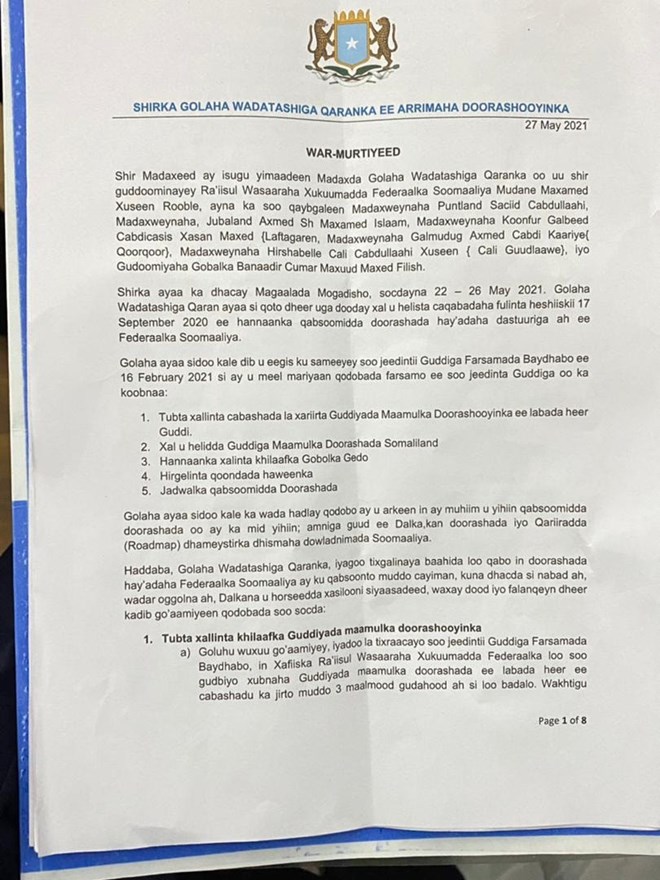 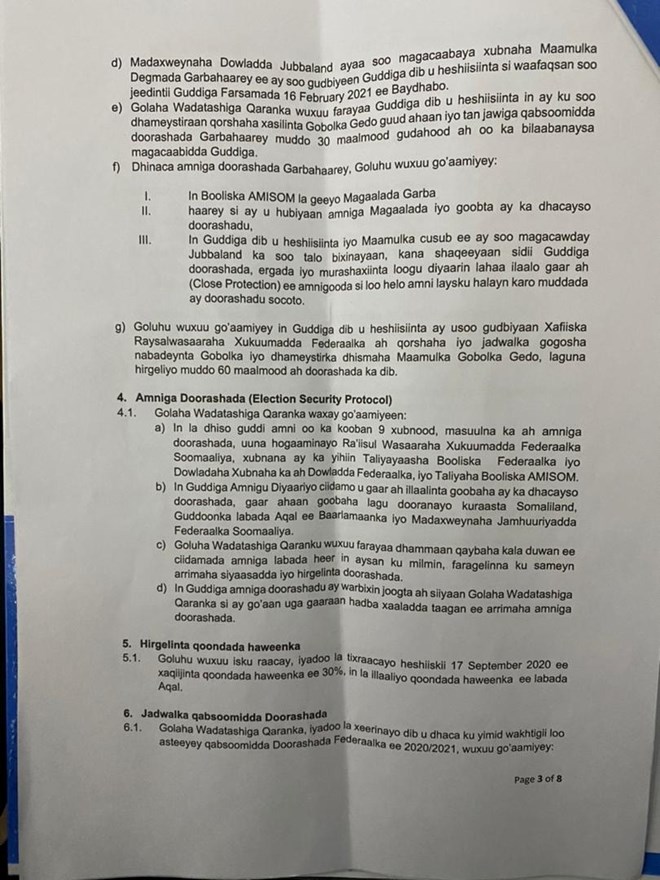 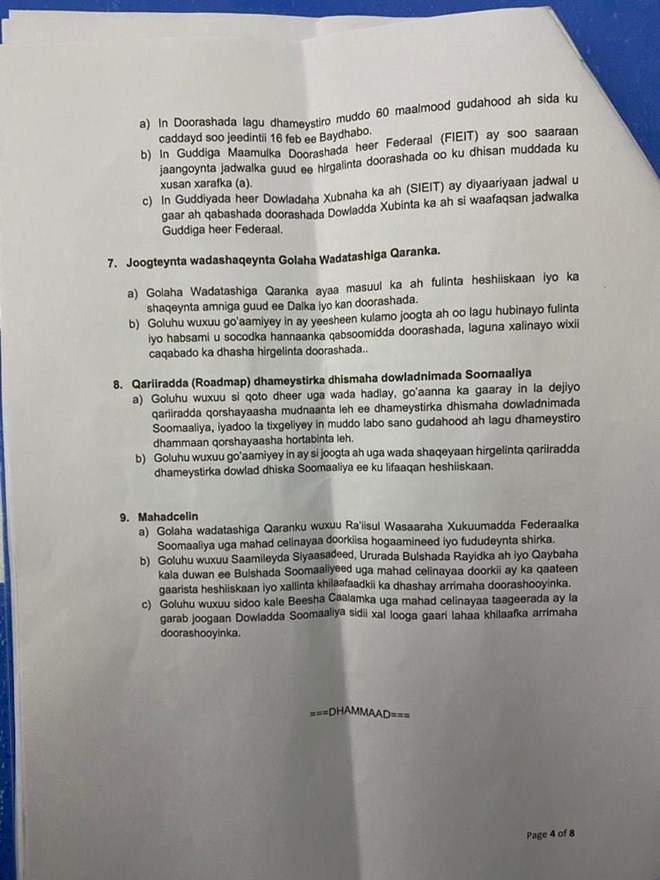 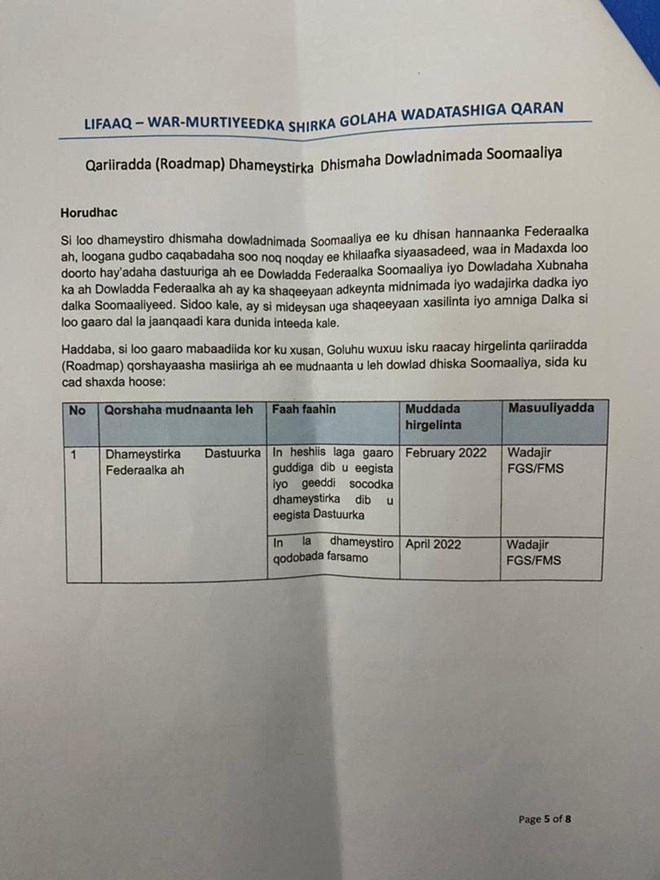 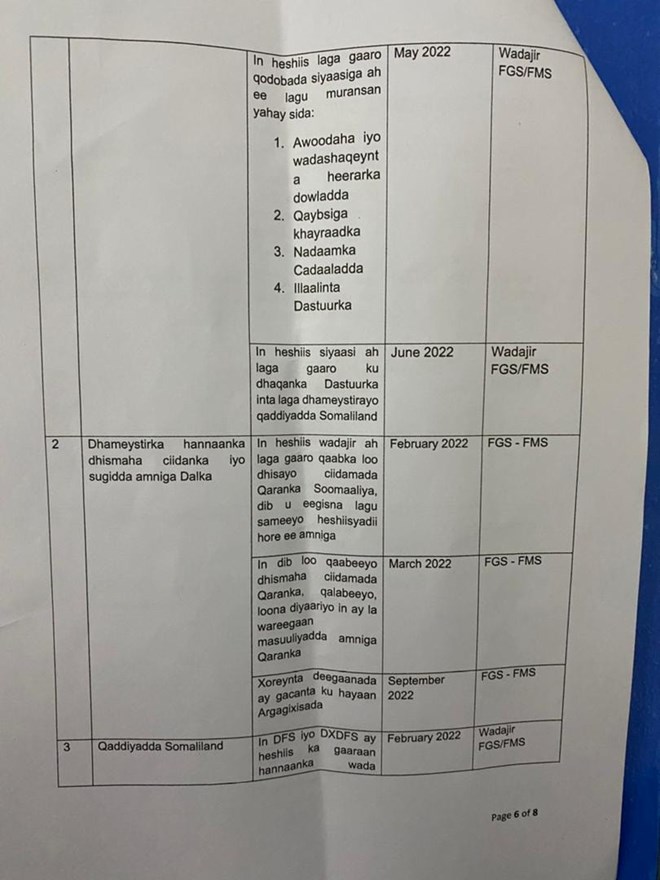 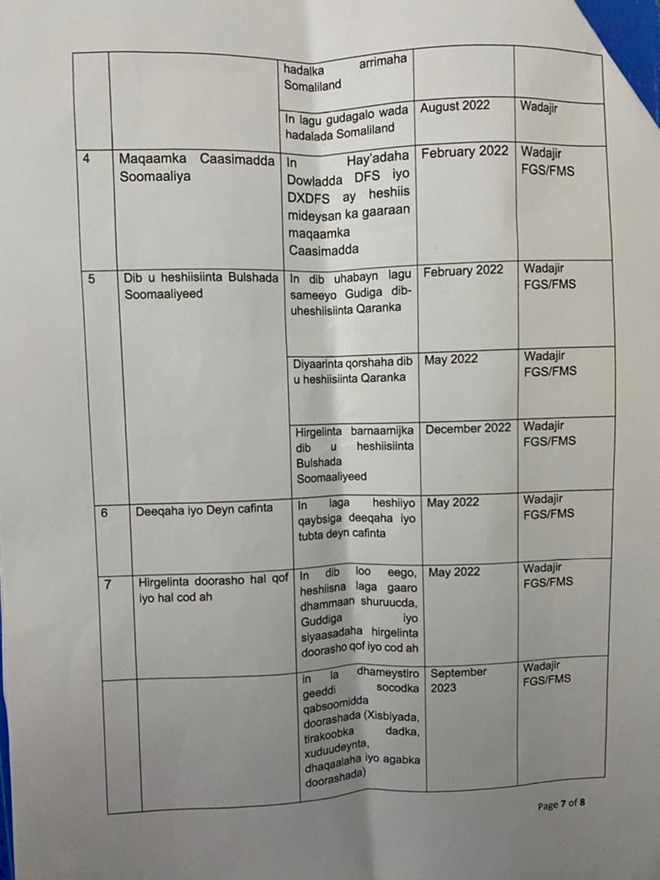