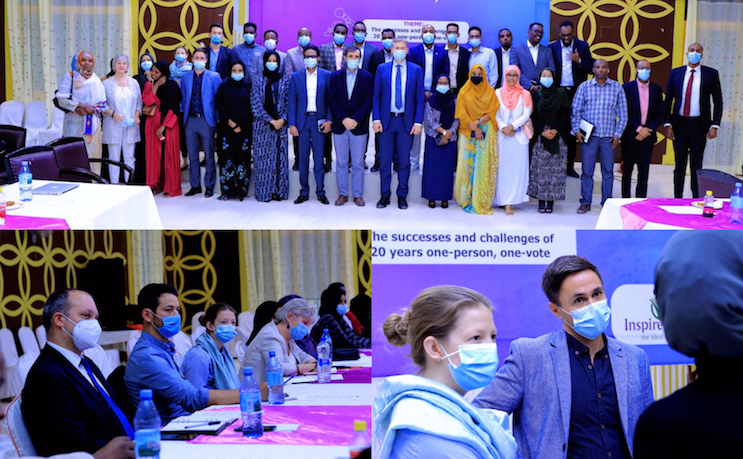 We are pleased to have conducted the third edition of our #HargeisaTalks series on 29th May 2021. The aim of these talks is to promote our mission to facilitate open, honest debate and seek collaborative solutions across the Horn of Africa and the globe.

This is a platform for Diplomats, academics, and politicians to share their thoughts on the region’s most pressing issues, and to also provide a space for local intellectuals’ to air their views and concerns. It is a forum for a candid, but civilised, exchange of views that looks into socio-economic, diplomatic and political matters that are of interest to the stability, prosperity and development of the Horn region.

We are honoured to have had HE Nicolas Berlanga Martinez, EU Ambassador to Somalia and HE Ole Thonke, Danish Ambassador to Kenya, Somalia, the Seychelles and Eritrea as our third guest speakers. The Ambassadors are in Somaliland as part of the International Diplomatic Presence Mission observing the 31st May elections and both have extensive experience with Somaliland’s democratic presence over the years. Thus, this paved the way for the night’s lively discussions reflecting on the successes and challenges of the 1P1V electoral process for Somaliland over the years. A number of key issues were highlighted, ranging from how to limit electoral delays, the work ahead to break the barriers to the full participation of women in politics to the role and reform of Somaliland’s upper house, the Guurti. In an overarching manner, the Ambassadors provided a snapshot of EU and Danish support around Somaliland’s democratisation process as well as the Somaliland Development Fund and its successes since its inception.

The attendants also raised some pressing questions and comments on the issues being discussed. The role of women in the elections and the hindering role of the clan system was a key highlight of the night. Equally, participants touched on the need to localise the efforts of civil society and the NGO sector as they often don’t reach the grassroots level. In that same light, attendees explored how the upcoming intake of MPs and Councillors could positively impact Somaliland’s development in the coming years.

Although both the Ambassador’s and the attending intellectuals signified that Somaliland’s elections over the last two decades are an example to the wider region, there was overall consensus on the need to continue improving in many areas to ensure that Somaliland democratic process continues on an upward trajectory.

Inspire Group thanks the Ambassadors for accepting our invitation, and being in Somaliland to witness these seminal elections and for their continued support to Somaliland’s elections. Equally, we thank HE Valentin Zellweger, Ambassador of Switzerland to Somalia and esteemed members form the German and Finnish delegations for attending the session.