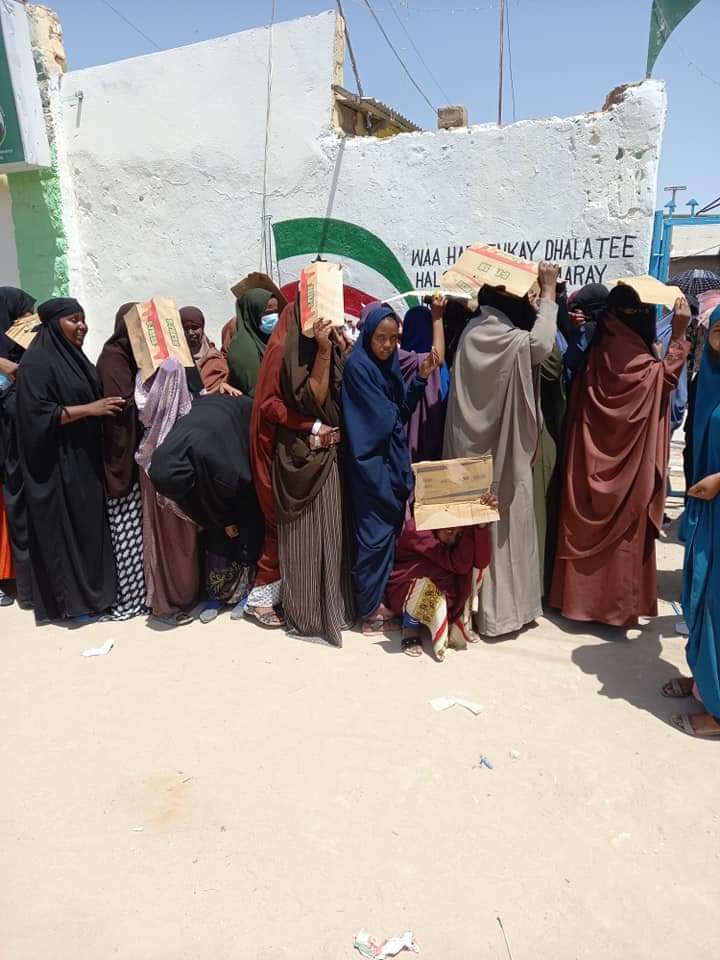 More than a million registered voters went on long lines to vote for representatives of their choice in parliament and in local governments, Monday, nationwide across the Republic of Somaliland.

Precisely, 1.65 million are expected to go to the polls voted peacefully enduring the thirst, dust, long queues, and searing sun.

More than 30 000 personnel were deployed to cover  2,709 stations across 23 polling districts over the six major regions. Likewise, 11 000 police officers were deployed to ensure law and order.

President Musa Bihi, accompanied by a number of ministers, the Police Commissioner, and high-ranking officials in his government, kicked off the polling at 6:00 in the morning at the ‘Shaqaalaha’ hall, Hargeisa.

He hoped that the day would begin and end in peace and that everyone will have a chance to choose who will represent him/her in parliament and in the domicile s/he lived.

Long queues formed right from 4:00 a.m. at polling stations across the country. Neither the old, nor the infirm chose to remain at home. 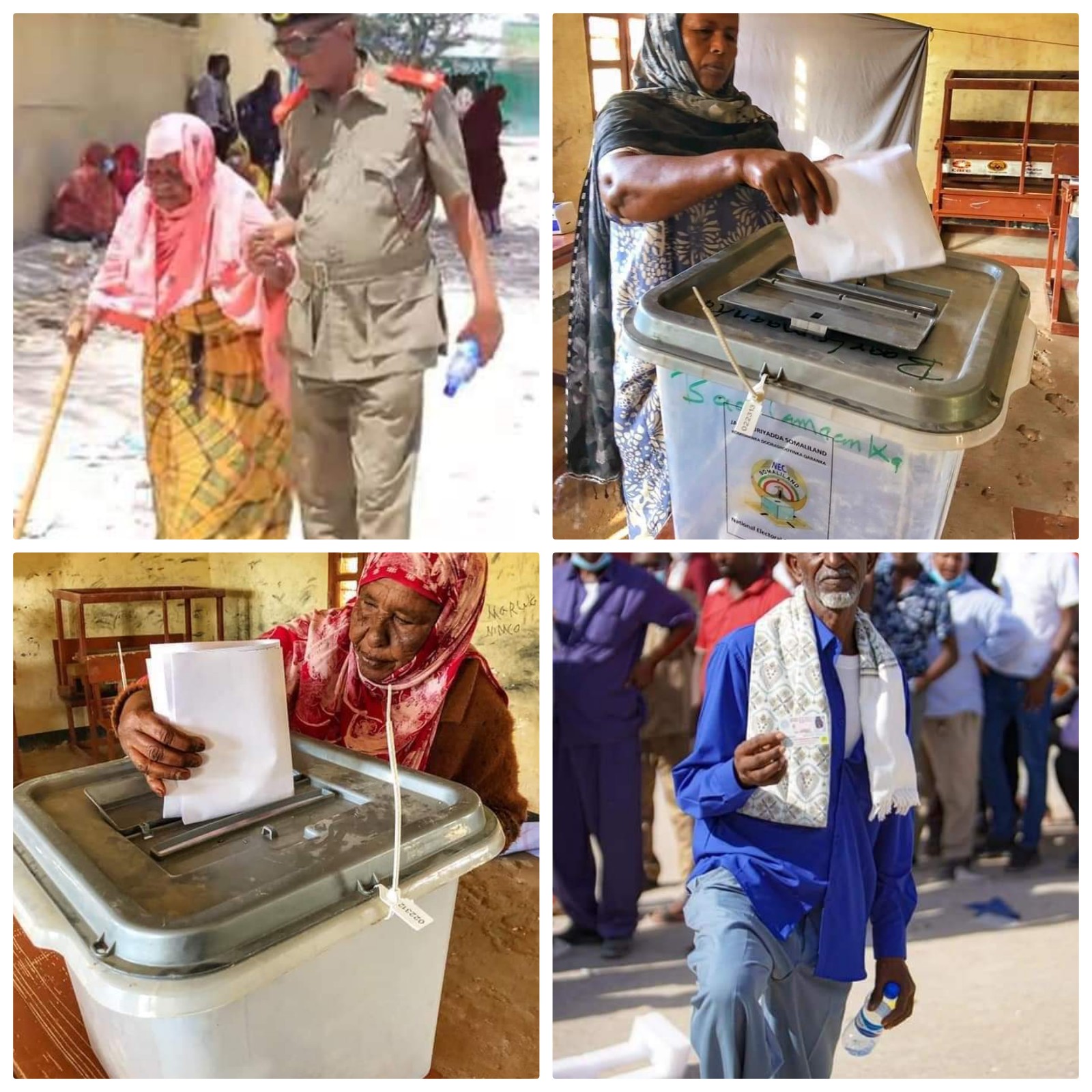 Sun rays – as if marking the day more testing for the determined voters  – started shooting over rooftops at the long, packed lines.

“I am here on this scorching hotline to exercise my constitutional right and showcase my homeland – Somaliland,” Adnan Shadiro, a communications specialist, stated. 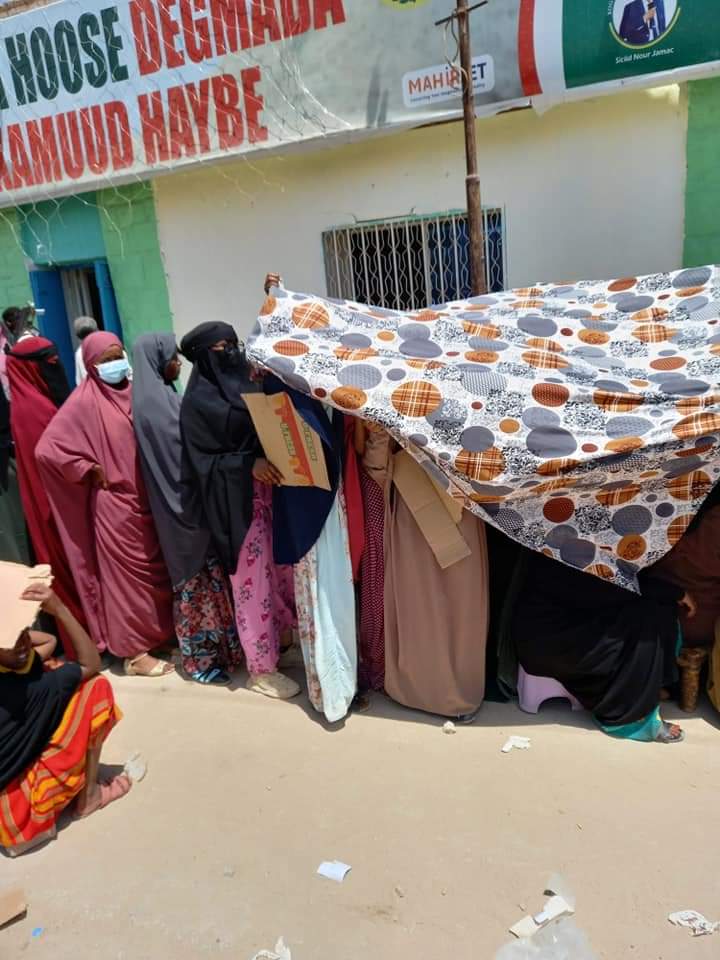 May 31st is not only a day set for the election of local and parliamentary representatives but, to the majority of Somalilanders, another day they set for themselves to show the world how mature and democratically far more advanced than many Somaliland was.

Over 800 candidates are vying for 220 local council places and 82 parliament seats.

Among the candidates are 28 female runners and 5 from minority groups who, traditionally, would not have attempted the effort if not greatly encouraged by the rest of the society to run against the odds and show their mettle on their own merit.

The latter group took heart and it appears that the promises made to them did not go in vain. 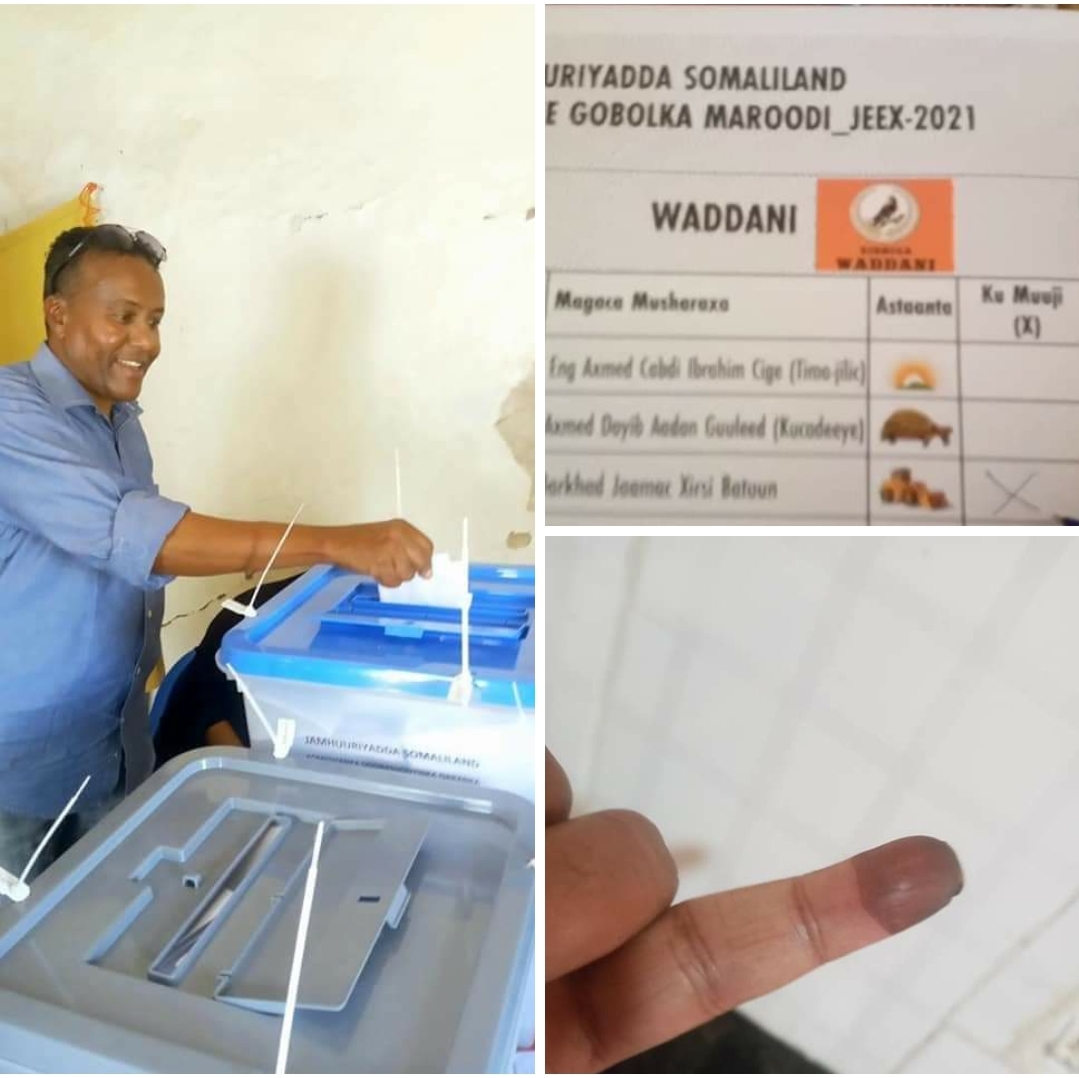 Adam Ismail (above), an economist, pictured where he put the cross on his card. It shows he voted he voted for a brilliant, upcoming politician, Barkhad Jama Battun, who is running on the opposition Waddani ticket. Barkhad, a law graduate, himself, comes from a minority ethnic group that appears to have found somebody to rally behind at long last.

Adam does not belong to the same group but is voting for him because of Battun’s promising merits.

Another highlight of the day was also related to voting for Battun.

A young, expectant mother went into labour while filing to cast her vote for Barkhad Battun. 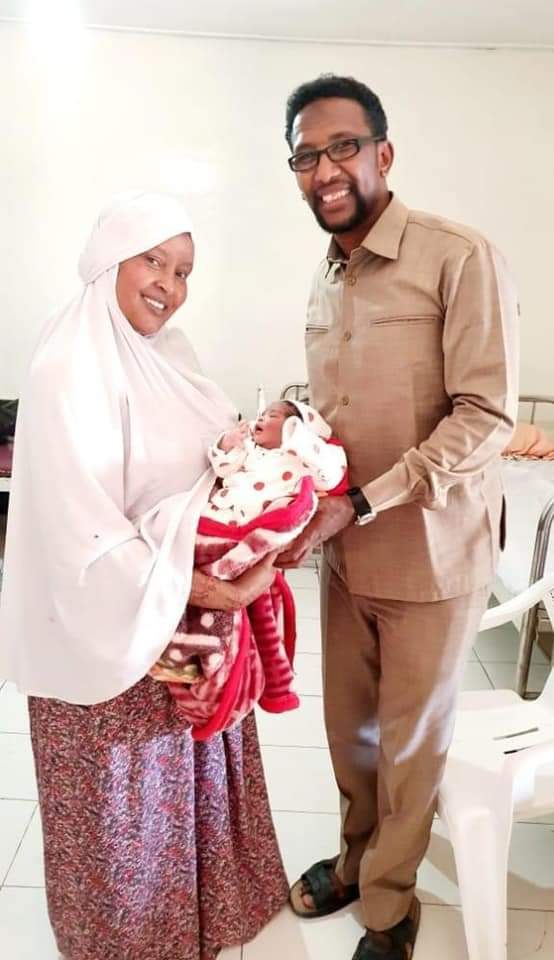 She gave birth to a boy and named him after her candidate: Barkhad.

May 31st is also significant to Somalilanders, and., especially to residents of Hargeisa, the capital city of the Republic of Somaliland.

Thirty-three years ago to the day, on May 31 1988, SNM forces fighting to liberate the then northern regions from the cruel dictator, General Mohamed Siyad Barre, entered the city in a kamikaze raid despite the daunting, highly superior forces facing them. The confrontation was to show an insouciant world – as it is today – looking on the atrocities the military regime was committing against the people of Somaliland and doing nothing that they were ready to sacrifice their lives to cast off the yoke of persecution from their people. 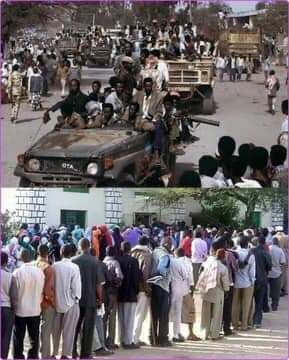 It was a show of will, then, as it is, again, today. The contrast in the collage above cannot be escaped.

Members from over thirty African countries, and more than a dozen UK, US and European missions as well as representative offices including that of Taiwan, are monitoring the elections besides over a thousand local monitors representing non-state organizations.

The Somaliland Election Monitoring Mission (SEMM) include Greg Mills, the Director of the South African Brenthurst Foundation, Ernest Bai Koroma, ex-president of Sierra Leone, and Kizza Basigye, a former presidential candidate of Uganda and a prominent opposition leader of the East African country.

LIEOM, led by Michael Walls, and organized by the DPU of the University College of London is also part of the monitoring teams.

The monitors met with President Bihi, NEC, and all the stakeholders before polling day.

“I welcome all International observers to the Republic of Somaliland for election monitoring. Our nation is well-known for its democratic, free & fair elections and as we’re going to the polls on Monday, I call the people of Somaliland to vote peacefully,” President Bihi said in a reception he made for the monitors at the Presidential Palace a day before.

“Our visit to the headquarters of the Somaliland National Electoral Commission left us with a good impression about the Commission’s preparedness to conduct peaceful and credible elections,” Dr Ernest Koromoa said of their meeting with the Commission.

Dr Kizza Basigye expressed his take of what he had seen and felt in Somaliland before the poling in two words which endeared all Somalilanders to him immediately.

To reflect how transparent people wished the election to be, bright lights took some interesting pictures.

One showed a billy-goat inspecting a long line as if to check if their minors lurking among the voters. 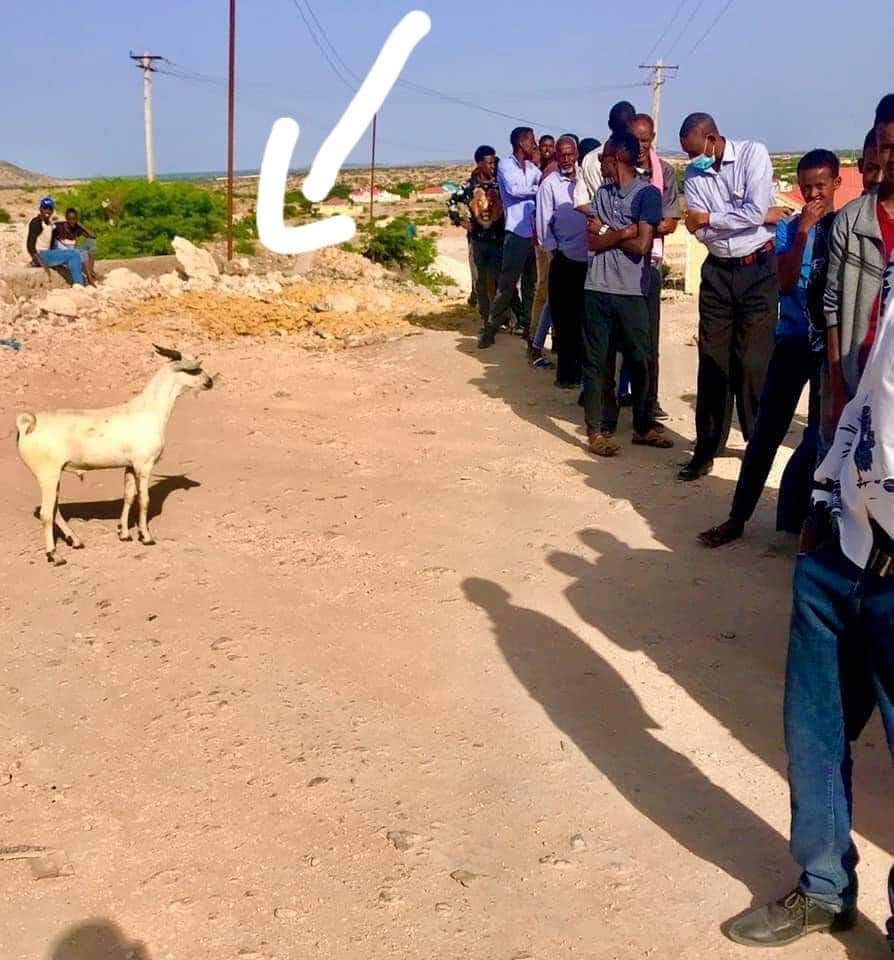 A commentator said” “Even goats send their own monitors since they had a stake at the outcome (hahaha!)”

Interestingly, for the first time in the troubled history between the two erstwhile partners in the ill-fated 1960 merger, a high official working for the Somalia administration offered glibly-phrased felicitations to the people of Somaliland on their polling day.

Mehdi Guleid, himself a Somaliland-born who went over to the opposite camp, Villa Somalia, and is currently serving as the interim Deputy Minister, called Somaliland to learn from the democracy and impeccable 1person-1vote system of polling from Somaliland.

The press conference he held last evening took many by surprise.

Guleid is an ardent unionist who is linked to being the mastermind of the many sabotage programmes the Farmajo trained against Somaliland and its political and economic development.

He is one of two top Somaliland-born leaders who are tasked to supervise the selection of MPs for Somaliland in the federal parliament. 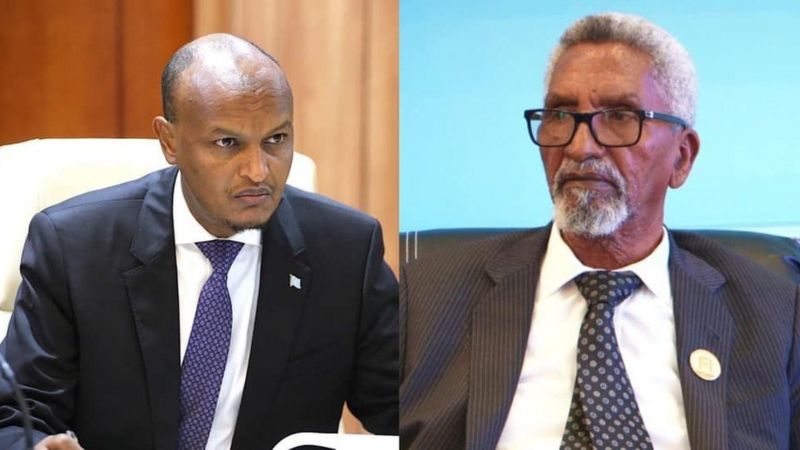 How Guleid could reconcile people in Somaliland freely and fairly electing their parliamentary MPs in a 1P-1V election, drawing from a 30-year experience behind them since they struck out on their own in 1991, and the selection he and Hashi are picking from economic migrants in Mogadishu behind closely guarded doors, is a subject for an interesting study by itself.

Meanwhile, Somalia looks on in consternation as another chapter of the fast-paced attainments of Somaliland takes hold of world imagination, genuine interest.

Somaliland has suffered thirty years under Somalia-dominated administrations which lasted from 1960-1991. It struck out on its own on 18 May 1991 proclaiming the full restoration of the internationally recognized independence and statehood it lost to a zealous merger with Somalia on 1 July 1960. From then on it built a thriving beacon of democracy in the Horn of Africa from ashes and shambles left behind by a vindictive regime.

The model of grassroots, relatively unsupported, customary peace-building model the country perfected, marrying the traditional to contemporary governance mechanisms, could have been perfect for many conflict areas to adopt including a Somalia still clinging to a defunct union dream, observers point out.

Whatever the case, Somaliland, certainly, will not be the same in the eyes of the world after this eighth 1P-1V election. Perhaps it is where this wind is blowing which inspired Gulaid’s departure from Villa Somalia’s usual assault tactics. 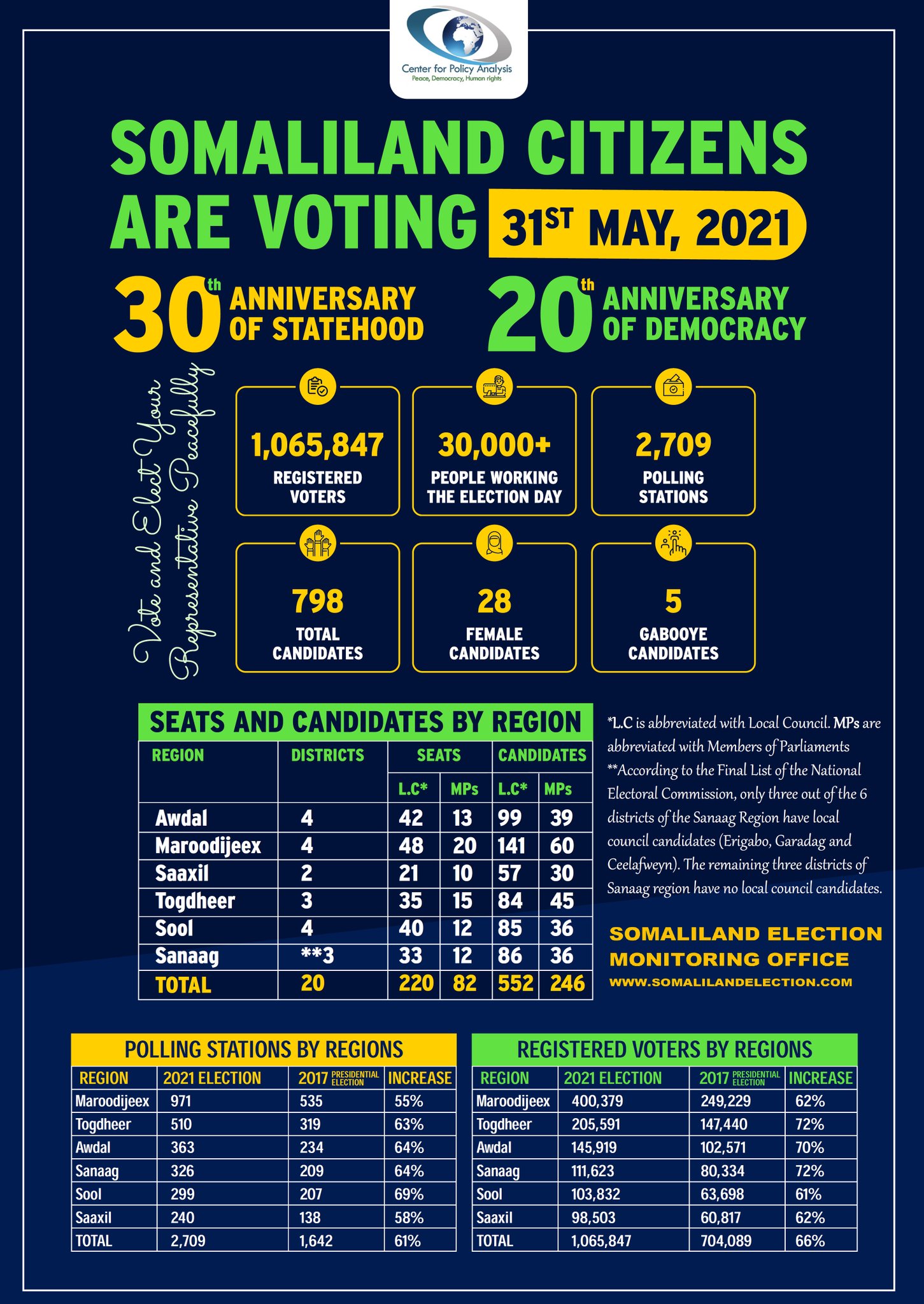