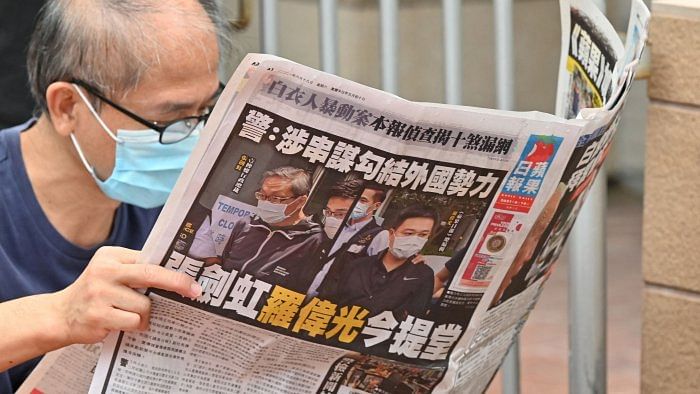 The pro-democracy newspaper Apple Daily in Hong Kong, China’s semi-autonomous region, is finally shutting down. The latest issue of the Apple Daily will be released tomorrow, the newspaper’s authorities said on Wednesday. The newspaper is being shut down in the face of government repression under the newly passed National Security Act in Hong Kong. The newspaper has always been known for its anti-Beijing stance. Police conducted an unprecedented search of Apple Daily’s office on the morning of June 16. 500 members of the Hong Kong Police took part in it. The National Security Act arrested five people, including Ryan Law, the newspaper’s editor-in-chief, and Chiwong Kim-hang, its chief executive.
At the time, police said, the Apple Daily had published a report seeking “sanctions” against leaders in Hong Kong and China. Concerned people have been detained for this. This is the first arrest under Hong Kong’s new national security law for publishing a report.

At the same time, Hong Kong government authorities seized the newspaper’s property worth 2.3 million US dollars. Due to this, Apple Daily fell into a severe financial crisis. According to the newspaper authorities, the situation has come to a standstill in the face of the financial crisis. Because the newspaper does not have the money to pay the salaries and allowances of the officers and employees for confiscating the property. The newspaper wanted to take a final decision on the matter next Friday. However, before that the announcement was made to stop the activities.

However, the June 16 search was the second police raid on the Apple Daily office. Earlier last year, a raid was launched to arrest the newspaper’s pro-democracy hostage, Lai, who was accused of colluding with foreign powers. Lai has been in prison since last December on various charges, including responsibility for participating in pro-democracy protests.

Meanwhile, a columnist of Apple Daily was arrested today. A Hong Kong police source told AFP the detainee was 55 years old. He used to write a column in the Apple Daily called Li Ping. He has been accused of “conspiring with foreign powers”.