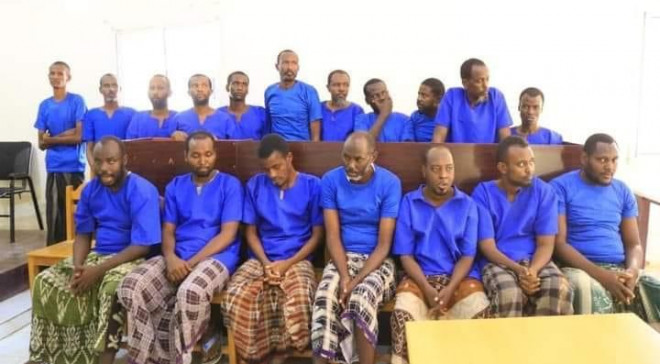 As part of its commitment to wipe out terrorists, Puntland executed 21 Al-Shabaab members after rigorous court hearings which culminated in their conviction as the state ups its fight against the violent extremists who are slowly making inroads to the region.

Puntland is one of the safest states in Somalia and has continuously prevented the group from making inroads, thus few attacks within the region by the Al-Qaida linked group, which controls most parts of central and southern Somalia for over a decade now.

Of the 21 militants, 18 were executed in the northern Galkayo, two in Garowe, the capital of Puntland while the last one was killed in Qardho. It’s not the first time the Puntland military is executing militants.

The militants were convicted for the assassinations of at least 300, including elite community and Mudug regional leaders, elders, officers, and journalists since 2008. It’s the largest single execution of Al-Shabaab fighters in Somalia.

The Puntland military court recently sentenced the “terrorist network” convicted of being behind blasts and killings carried out in the past 13 years. It’s part of the concerted efforts to eliminate the terrorists, who have been wreaking havoc in the Horn of Africa nation.

But the authorities have repeatedly blamed loyalists of the Al-Qaeda-linked Al-Shabaab for being behind the escalating violence in its jurisdiction. For instance, in February, 13 militants were also convicted in relation to attacks carried out in 2017.

During the reign of Abdirahman Farole as president of Puntland, such convictions and executions were also rampant as part of the effort to prevent the group from making inroads. In fact, the militants have rarely carried out attacks in Puntland.

This comes hours after a roadside bomb explosion targeted a convoy carrying Abdisamad Gallan, Puntland security minister and State’s Darwish force chief in the vicinity of Village of Bali Dhidin in Bari Region. One soldier died, several others were hurt

The area is a hotbed of terrorist attacks by Al-Shabaab and ISIS that engaged in heavy clashes with Puntland security forces in the past few years. However, security forces have often carried search for the militants during such incidents.

Puntland Security Minister Abdisamad Gallan accused ISIS of being responsible for Saturday’s bomb attack on his convoy in the Bari region, North Eastern Somalia. The ISIS-Somalia militants are mostly in the province but rarely carry out attacks given their rivalry with Al-Shabaab.

He vowed Puntland forces will soon root out the Al-Shabaab and ISIS terrorists from their hideouts in the mountains. The state has been largely safe due to the vibrant local military under the leadership of President Said Abdullahi Deni.

“We achieved one of our goals to eradicate Al-Shabaab from Mudug region,” said governor Abdiladif Muse Nur whose brother Ahmed Muse Nur, ex-governor killed by Al-Shabaab in a suicide blast in May 2020.

Meanwhile, Puntland president’s security advisor Mohamed Abdirahman welcomed the execution of the 21 militants as a move towards peace and stability in the Federal State.

“Puntland is firmly committed to eradicating terrorist groups from its entire regions to ensuring the peace & security of all citizens. Today’s execution of the 21 Al-Shabab militants is part of president Deni’s security plan,” the senior advisor added

Puntland has intensified war against militants, with the regime of Abdirahman Farole kick-starting the operations, which have been sustained over time. The military court has over time been used in bringing sanity in the region.

For instance, in 2013 the first mass execution of 13 terrorists was carried out by the Puntland military court for the murder of Dr. Ahmed Haji Abdirahman, the founder of East Africa University in Bossaso in 2012.

At least 34 Galmudug regional soldiers died in the Al-Shabaab attack on Wisil town in the Mudug region. The raid began with a suicide bombing at the gate of the military camp as a start of the attack. A heavy firefight ensued as regional forces managed to repulse the militants.

The group has often carried out attacks against innocent civilians and members of security forces, but their inroads in Puntland have often been blocked by vigilant security officers. Puntland Security Forces are often behind sophisticated operations targeting the militants.