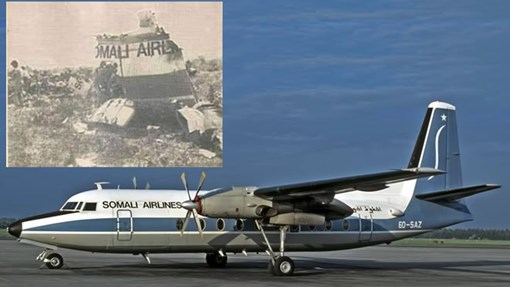 Forty years ago, Somalia experienced one of the worst aviation disasters, claiming all 50 passengers and crew on board, among them nine family members.

At about 7 am local time, Capt. Abdi Mohamed Mohamed, aka Capt. Dhafuuji and his Co-pilot Ali Umul took off their Fokker F27 aircraft registration number 6O-SAY from Aden Abdulle Airport in Mogadishu destined for Hargeisa. Onboard were 44 passengers and the other four crew members.

Barely ten minutes after takeoff, the aircraft, which was in service for five years, crashed, killing all on board. According to Aviation Safety Network, which tracks air incidents worldwide, the F27 aircraft met its ultimate fate near Ballad in the Middle Shabelle region, about 36 kilometres from Mogadishu.

Engineer Ali Foodade boarded the aircraft in Mogadishu following a request by the captain. According to aviation experts, there was no need for an engineer in the aircraft since no maintenance work takes place while the plane is on air.

If anything, an engineer was already on the ground in Hargeisa. Engineer Ahmed Osman, aka Macro, who now lives in Canada, was waiting for the aircraft to land at Hargeisa Airport, but that never happened.

“I was deeply shocked when I heard the aircraft had crashed,” Osman told HOL. According to Osman, there was no operational need for his colleague to board the flight in Mogadishu.

But before the crash in Ballad, the captain had reverted to Mogadishu shortly after takeoff. According to sources familiar with the day’s events, the aircraft’s Attitude Indicator (AI), which guides the pilot in the aircraft’s direction with the earth’s horizon, was faulty. There was, however, no correlation between this fault and the accident. Aircraft have standby AIs, which can still function even when the power of the plane fails.

According to Aviation Safety Network, ‘The F-27 entered an area of heavy rain in clouds with severe turbulence, eight minutes after takeoff. The aircraft entered a spiral dive after encountering strong vertical gusts.” As a result of the dive, Aviation Safety said the load on the right wing exceeded limits forcing it to separate.

Other versions of the story note that the pilot may have become disoriented and could not recover from an unusual attitude.

But Aviation Safety’s reasoning is contestable on account of the weather in Mogadishu in July. There are hardly any thunderstorms in Mogadishu in July, save for light showers. The sky is relatively clear; thus, the pilot’s thought of facing a storm is not feasible.

The aircraft was suspected of having been brought down by service to air missiles from the Somali National Movement (SNM), which was then waging resistance against the Siad Barre regime in the north.

“Ten minutes after takeoff from Hargeisa Airport, while climbing, the twin-engine aircraft went out of control, entered a dive and crashed in a desert area. The aircraft disintegrated on impact, and all 30 occupants were killed,” Aviation Safety notes.