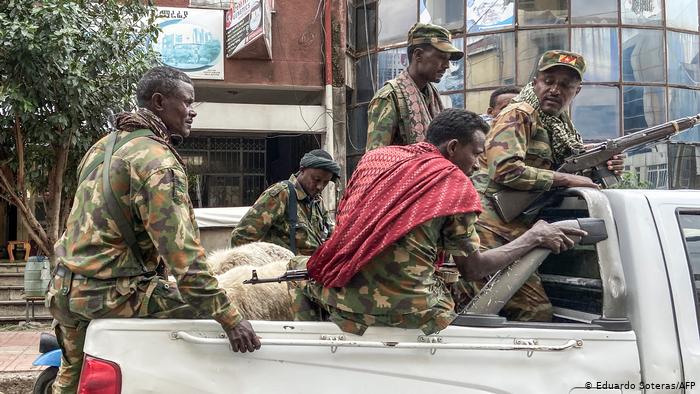 More regional militias have pledged to march into Tigray. Some fear this could send Ethiopia into a spiral of ethnic violence. Others see the move as sign of Ethiopian unity.

Special forces and militias from a number of Ethiopia’s regions are mobilizing to back the federal government’s military operations in Tigray, signaling a widening of the conflict.

Regular forces from Amhara — a large region abutting the south of Tigray — have been fighting alongside federal troops ever since Ethiopian Prime Minister Abiy Ahmed launched the military offensive in Tigray last November.

But now regular and irregular combatants from six regions not previously involved in the conflict are joining, including from Oromia, Ethiopia’s most populous region, as well as Sidama, Somalia and the Southern Nations, Nationalities and Peoples (SNNP).

Ethiopia has a federal system with 10 regional states (and two city administrations), which are largely ethnic based. Each have their own special forces, plus local militia groups often made up of farmers similar to a home guard unit.

“We have sent over two thousand militias to the front,” said the administrator of Western Gojam Zone in Amhara, Simenhe Ayalew, last week, according to the Bloomberg news agency.

The question is how much of a military asset these regional fighters will be.

“The regional militia has been given a Kalashnikov and maybe some very rudimentary training. But they are being called in because the war has decimated the federal forces,” said Kjetil Tronvoll, a professor of peace and conflict studies at Norway’s Bjorknes University College.

“The tragedy is that these militia may basically be perceived as cannon fodder and we can expect very high casualty rates if they don’t defect or surrender in large numbers,” Tronvoll told DW.

The mobilizations come amid reports that Tigray rebels are making incursions into Amhara-occupied areas of Tigray as well as into the Afar region, which borders Tigray to its east.

US-based Ethiopia analyst Yohannes Woldemariam said Afar was “very strategic because the road and the railway [linking the capital Addis Ababa] to Djibouti run through there.

“So if the TPLF manage to cut off the railway, then the central government would not have access to the seaport,” Woldemariam told DW.

Melisew Dejene, an academic at Ethiopia’s Hawassa University, said he wasn’t surprised “to see different forces from different regions come together in order to defend the national interest.”

“The TPLF was labeled a terrorist group in a recent cabinet decree and now it has become a threat for the nation,” he told DW in a telephone interview from Sidama region.

Dejene sees the support by the various regions for Abiy’s troops as a “positive sign” that “people are coming together under one flag to defend their nation, Ethiopia.”

The Horn of Africa nation, with a population of some 110 million, has more than 80 distinct ethnic groups.

According to conflict expert Kjetil Tronvoll, however, some of the regions had heated internal discussions about whether they should heed Abiy’s call to march into Tigray.

“The local argument is: ‘We don’t want to be pulled into this war. It is not our war’,” Tronvoll said in a phone call from Oslo.

He believes the conflict is mostly seen within Ethiopia as a war between Amhara and Tigray.

Early in the conflict, Amhara seized territory in the south and west of Tigray which it says was annexed by the TPLF decades ago. Over the past eight months, ethnic Amharas have been returning to western Tigray and occupying abandoned homes and farmland.

Adding to the mix are also troops from Eritrea, Ethiopia’s neighbor to the north, which entered the conflict in support of Abiy’s government.

Eritrea’s leader Isaias Afwerki is a sworn enemy of the TPLF which ruled Ethiopia when both countries fought a border war.

Despite the TPLF’s recent battle successes, Eritrean forces still remain Tigray, although it seems they have withdrawn to the north closer to the common border.

The United Nations Human Rights Council last week called for a swift withdrawal of Eritrea’s troops. It also called for an immediate halt to all human rights violations in Tigray.

In the first eight months of the conflict, rights organizations collected numerous witness accounts of widespread atrocities including gang rape, massacres and looting.

Humanitarian organizations are also warning that the ongoing fighting, combined with the difficulty of getting aid into the region, is pushing hundreds of thousands people into Tigray into mass starvation.

Ever since Ethiopian troops retreated from Tigray, the region is again under a total communications blackout with telephone and internet cut — similar to what happened at the beginning of the conflict.

The concern is that with new regional militias entering the conflict, both the catastrophic hunger and human rights violations might spiral out of control.

DW requested a comment from the Office of the Prime Minister, but had not yet received a reply at the time of publication.

“It’s a very dangerous situation that’s evolving when you have so many groups who are fighting and they have their own issues and their own agendas,” Ethiopia analyst Woldemariam said.

“This looks like a recipe for something really catastrophic. […] It may make Rwanda look very small. That’s my fear,” he said, referring to the genocide in Rwanda in which some 800,000 people died.

Fueling these fears, in a speech on Sunday, Prime Minister Abiy Ahmed used words such as “weeds”, “cancer” and “disease” to refer to the TPLF in a tweet.