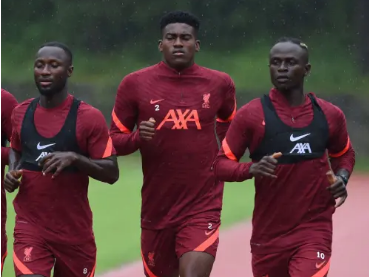 In theory, this should be a much better season for Liverpool.

The Reds won the Premier League title after a 30-year wait this time last year but, due to injuries, they endured a dismal defence of their crown.

In the end, Liverpool finished 17 points behind champions Manchester City and could have even missed a Champions League qualification spot – and probably would have if not for winning five games in a row to finish the campaign.

But with Virgil van Dijk, Joe Gomez and Joel Matip – the first two of whom have been absent since October – all back and ready for the 2021-22 campaign, Jurgen Klopp could and definitely should have a lot more stability in defence next season.

The trio have all made headlines for the right reasons during the pre-season trip to Austria – especially Matip, whose attacking forays have caught the eye – and here’s what Sadio Mane said about the powerhouses.

He told the club’s official website: “I think not only me, I think everybody [is excited to have them back]! As a player we all become like fans because if you see your teammate getting back in training and fit, you just say, ‘Wow!’ When I see Virgil, Joe and Joel, after every training session.”

Next season is very much about redemption for Liverpool and they begin that story away to newly-promoted Norwich City on August 14.

It’ll be fascinating to see who Klopp starts in central defence because let’s not forget that £36 million has also been spent on Ibrahima Konate, who looks one hell of a physical presence already.

The German manager certainly has a headache but it’s a good sort of headache and given what happened last season, he won’t mind one bit.